Brandon Graham, auteur of strange and wonderful comics, ends his latest satirical and insightful science fiction story with “Rain Like Hammers” #5. This final chapter of this outstanding comic is a vast and gorgeous gulf of bittersweet emotions, bringing this series to an end in a way that some will find a bit unusual (if you didn’t already think that of the whole series), but in truth feels like the only way it could have ended.

“On the desert world of Crown Majesty, space butler Brik Blok, Little Monster, and Eugene fend off desert marauders and witness a trial for the fate of known space. Who will be the winner? That’s for the ancient demon-king-judge to decide.” 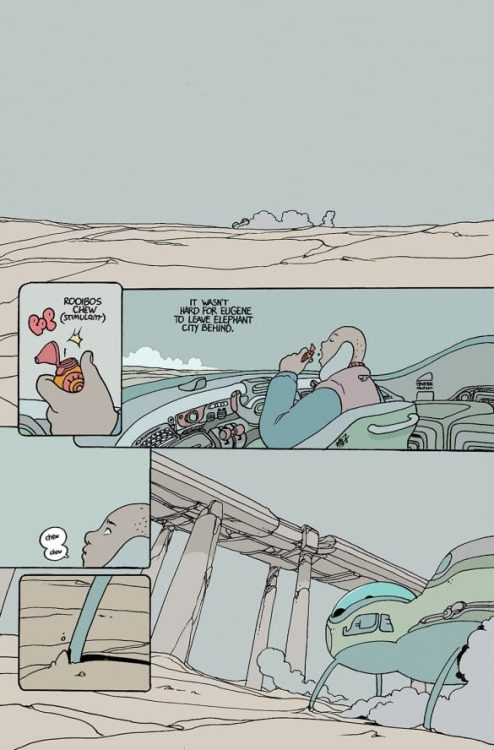 All of the scattered and seemingly unrelated plot points in this series finally all meet together in “Rain Like Hammers” #5, an they do so in deeply satisfying fashion. We finally get back together with our friend Eugene from the first issue, and his inclusion fits perfectly alongside that of Brik Blok and the rest of the cast we’ve met since then. Brik’s isolation in his new body, and his alienation from his old allies, fits perfectly with the loneliness felt in Eugene’s story, and everything comes full circle. The massive and faraway-seeming machinations of those in power play in the background while deep introspection and decision making plays out in the heads of our two main protagonists, which makes for a quiet but beautifully well-deserved ending to this story. Graham’s sense of oddball humor mixed with poignant emotional struggles makes for yet another dynamic and effective script that endears itself to its readers in a multitude of ways. The overhead narration fits in this story as it describes the actions of characters in an unrecognizable setting, and grounds us in this story’s reality. This is a beautiful narrative that we’re given here, and while I obviously can’t talk about what happens, it wraps up superbly both emotionally and in terms of its plot, and it will be something that stays on my mind for some time to come. 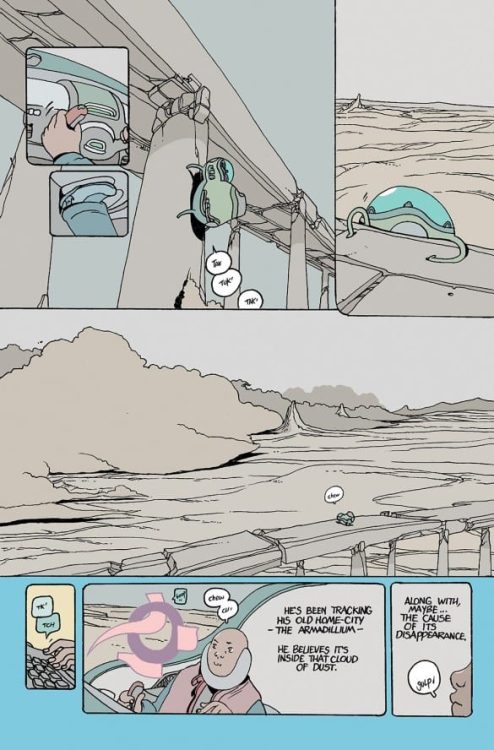 As unbelievable as this is to say, Brandon Graham really saved his best work on this series for last in “Rain Like Hammers” #5. The visual range this issue has as it closely examines our characters in their most intimate moments, as well as surveys the landscape as space-faring cities and interstellar gods make landfall, is utterly astounding. Every time I have been taken aback at Graham’s visuals in prior issues was multiplied tenfold in the pages of this final chapter. The tone evoked by the drawings of a barren planet being traveled by a lonely Eugene in a gumball machine-shaped land walker is both soothing and somehow disquieting. The sense of awe I felt once I realized the mountain range I was looking at was actually a massive god-king entity was something I rarely ever feel in any medium. In all honestly though, I believe that the best and most impressive moments were the ones where we got to see the characters up close as they traveled and reflected on their decisions. Brik Blok’s quiet contemplation regarding the how’s and why of his quest for the woman he loves is a genuinely painful moment, all conveyed in the careful and minimalistic detail in his expressions. There’s a melancholic solitude conveyed in every panel in this book, and in all honestly that’s probably how I’d describe the entire series. Of course all of the zany designs and clever little artistic witticisms are still here, but this finale feels so much quieter and more reflective than what came before. It’s a stellar ending that fades out in a bittersweet and beautiful manner. 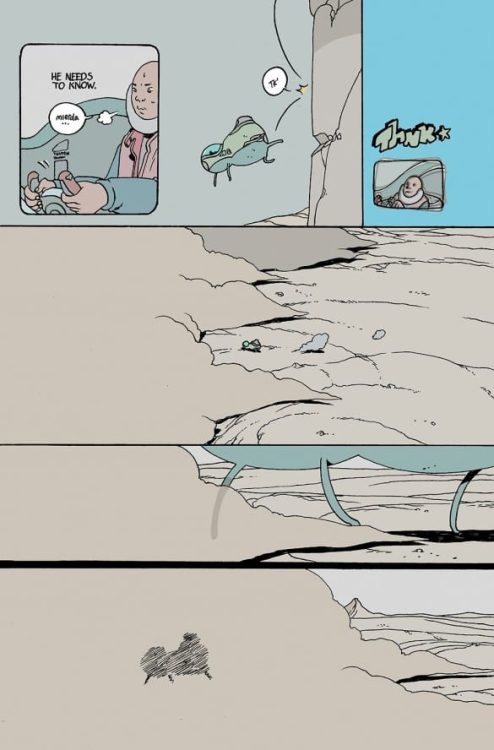 “Rain Like Hammers” #5 is an emotionally satisfying, intelligent, and poignant end to this brilliant comic series. Brandon Graham reflects on the struggles and societal ills that have created both the larger isuues in the series, as well as the steps that brought both Eugene and Brik Blok to the point in their lives where they are now, and what they decide to do about it. With series-best art and hard-hitting reflective moments, this is an incredible comic that I cannot recommend enough. Be sure to finish this series off when this final issue hits shelves on 5-19!

Brandon Graham's poignant satire comes to a bittersweet end that will leave you thinking about it for long after you close the book.Review: RAIN LIKE HAMMERS #5 - Disappearing Into Orbit