Review: PULP Is A Brilliant Revenge Epic With The Volume Turned Down

Written by Ed Brubaker with art and lettering by Sean Phillips and colors by Jacob Phillips, Image Comics’ Pulp is a fresh spin on a plot we’ve seen before. An old man, Max Winter, with his glory days behind him, is given one last shot to stand against injustice and possibly go out in a blaze of glory. It’s a familiar story. But this creative team makes it feel fresh by dialing back the action and romanticization, and allowing their main characters’ fears and dreams to take precedence.

Under “understated” in the dictionary, there should be a note that says “see: Pulp.” It’s literally a comic about cowboys and nazis, yet it spends more time on Winter’s fear of old age and death. There’s a lot of text on every page of this comic, yet it feels quiet, because most of what is written is going on in Max’s head. He’s contemplating his place in the world and what he’s going to be leaving his wife when he’s gone. This could feel more like sitting down for a lecture than reading a comic, if Brubaker didn’t only tell us what we need to know to understand the character.

Revelations in this graphic novel have a habit of happening “off panel.” Max talks about his brother’s death almost nonchalantly, and the death isn’t even shown. We know Max had a wife and daughter, but it’s only ever inferred what happened to them. Max refuses to go into further detail, even in his own mind. His inability to revisit the details tells us more than any explanation about his wife and daughter could. Max even thinks to himself at one point, “I guess when you’ve lived this long, your silences can say as much as your words.” It’s Brubaker’s empathy for the character — his refusal to drag Max back through his painful past for the sake of exposition — that gives this graphic novel its understated brilliance. 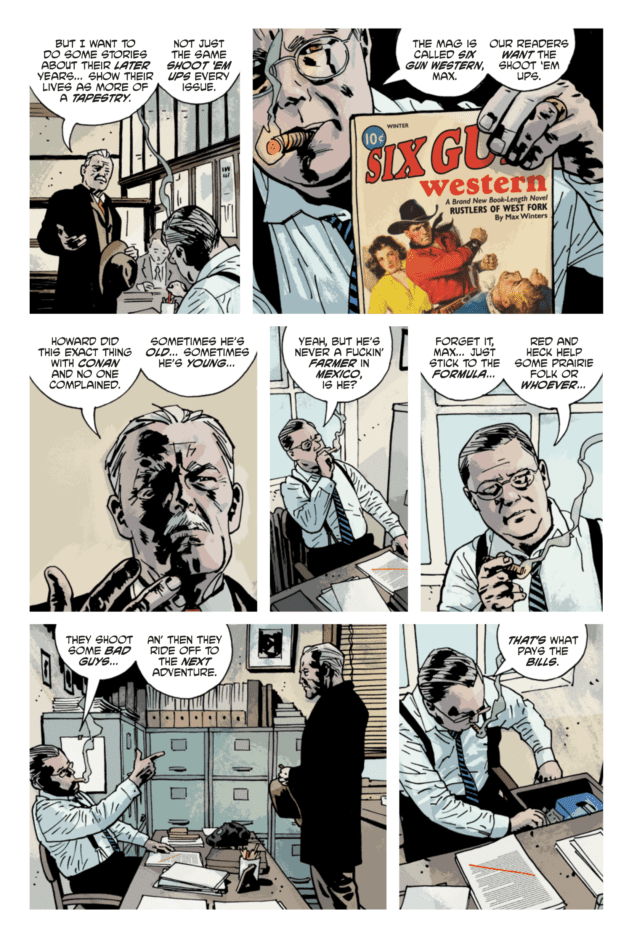 Sean Phillips doesn’t want the flashy action scenes to take center stage in this comic. They could. There are car chases, plenty of gun fights, a mugging — the list goes on. But these moments in the graphic novel seem to fly by. A simple conversation between Max and his editor takes up three full pages. A car chase is over in a page and a half. It’s because these moments aren’t the moments that make Max who he is. As much of a gun-slinging cowboy as he once was, it’s clear from the get go that he wants a quiet life. He writes an ending for the characters in his cowboy magazine where they ride off to Mexico and retire. We see the pain on his face as his editor slashes that part out of the script. He wants that for his characters because he wants it for himself.

We also see Max reminisce about the old days a lot. But the details are often foggy. Rarely are the faces of the characters in Max’s flashbacks given as much detail as the ones in Max’s present day life. And it’s even rarer in Max’s memories that we see Max or his partner Spike facing us. Their faces are obscured by shadow, or they’re looking in the other direction. It gives us distance. But we also see the moments that, for Max, still feel like they happened yesterday. Max remembers his brother being shot off his horse in vivid detail. He remembers seeing Spike, one last time, a man empty without adventure. We know that the real thing that makes Max feel so old, is that he’s outlived all the people closest to him.

Jacob Phillips not only brings us into Max’s mindset, but creates an ode to old comics at the same time. Phillips colors Max’s flashbacks, which were introduced as stories from his Western Magazine, with two or three colors. It looks like something out of the Sunday paper, when colorists had four or five options to pick from. Phillips throws us back into the world of old comics, to show us how Max feels about reliving his past. The scenes may be colored simply, but they look breathtaking. So we see those memories as a time when things were simpler, but more beautiful for it.

Most of the rest of the graphic novel looks pretty bleak. Max is tired, and his world looks tired with him. But there are a few moments of sudden color. Rosa, Max’s wife, is always depicted in warm colors. In fact, every scene she’s in is colored with a warmer palette. We get the sense that she brightens every room she’s in. And there are a couple times that we see Max against a red background. It’s when he feels close to death, when he’s in danger that this happens. It’s fitting then that he wears red in all of his memories of being a cowboy. Max Winter was cloaked in death in those days, and maybe that’s what made him feel so alive. 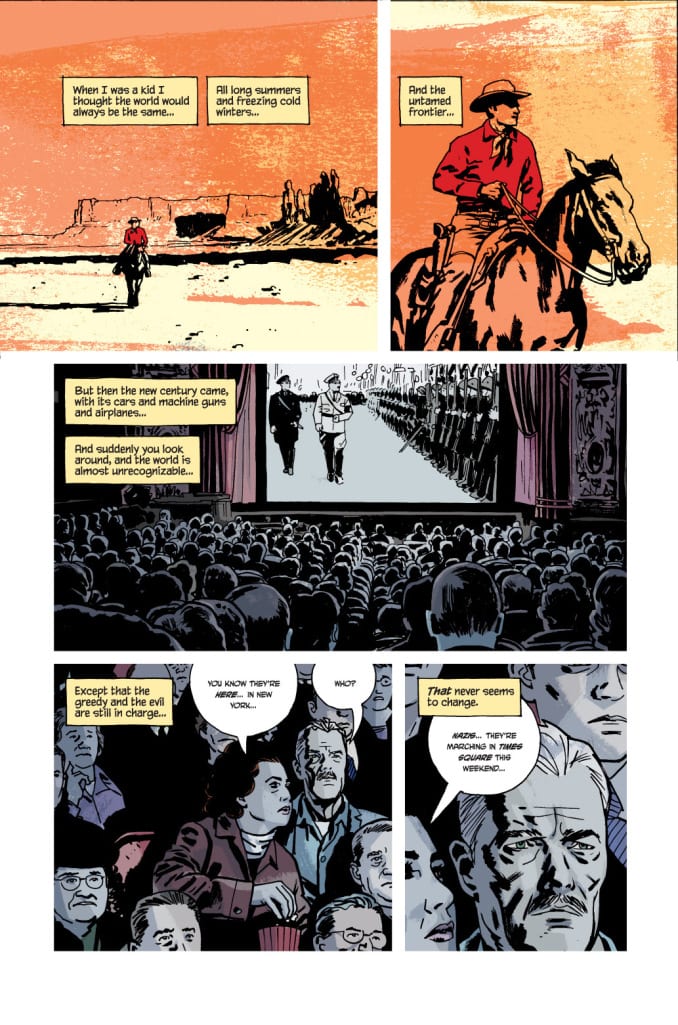 With Pulp, Brubaker, Phillips and Phillips have given us Inglourious Basterds with the volume turned down. It’s an intimate revenge comic that somehow manages to feel deeply empathetic. Image Comics’ Pulp doesn’t want to get your heart racing with easy thrills. It wants you to contemplate the mark you leave on your world. It wants you to stop lusting after a life of adventure, and start working towards beautiful simplicity. Pulp is out July 29th from Image Comics, and it’s a must-read.

Image Comics' PULP may be a revenge epic, but this creative team's empathy for their character dials down the action and amps up the humanity.Review: PULP Is A Brilliant Revenge Epic With The Volume Turned Down