Review: Player 2 Enters The Game in ALIEN VS. PREDATOR: THICKER THAN BLOOD #2

The second issue of “Alien Vs. Predator: Thicker Than Blood” is a beautiful but forgettable read. The plot itself is rushed and introduces new characters at random, but it’s helped out by some great AVP action and phenomenal artwork.

With nowhere left to run but into the Predators’ ship, every turn leads Maria and Tyler deeper into danger–until they discover a captive xenomorph. Could the Alien be the weapon to tip the scales in their favor, or will they find themselves caught in a crossfire? 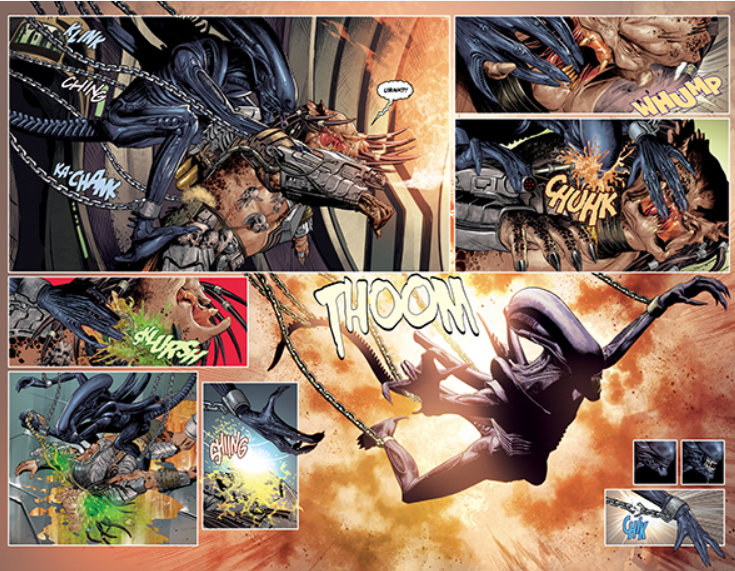 The script in “Thicker Than Blood” #2 unfortunately doesn’t have the straight-forward momentum the first issue had. The actions of the two lead characters don’t really make much sense in the context of the story. Granted, one of them is an android, so this could excuse the nonchalant attitude he has towards his “parents” deaths. The older daughter’s actions however just seem rushed for the sake of getting to the action. The suspension of disbelief, even in a series such as this, can only get the audience so far. There’s a sudden introduction of a random side-character as well that feels completely out-of-place and purposeless in the goings-on of the plot. The action on the other hand is quite great. The kids gain a new member of their party near the end of the issue that will hopefully make for a more fun follow-up chapter. 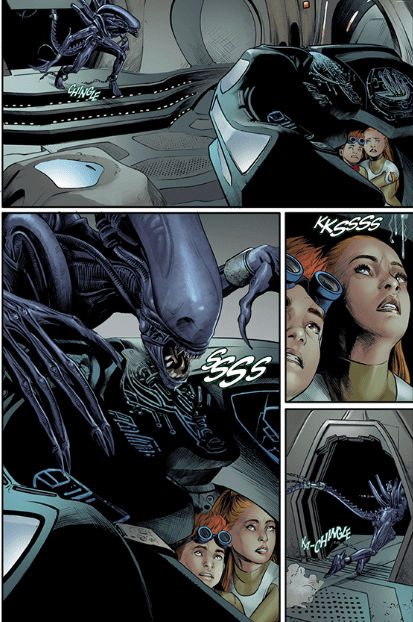 The real draw and saving grace to “Thicker Than Blood” is the outstanding artwork. Doug Wheatley’s renderings of characters both human and alien are so realistic it’s a bit unnerving. This is meant in the best way possible, as its some of the best comic art currently hitting shelves. Shipboard details and gory bits are given great attention and sell the hell out of the atmosphere. Wheatley’s pencils and inks are given color by Rain Beredo, who nails the dark and grimy-yet-polished aesthetic an AVP series needs. Everything from the lighting to splashes of crimson red and glowing green blood looks absolutely stellar. If there’s any one reason to check out this comic outside of its franchise roots, it’s the visual work.

“Alien Vs. Predator: Thicker Than Blood #2” is a beautiful mess of a comic. The plot with Maria and Tyler rushes past the prior tragedy they have experienced to the point that the pair is almost unlikeable. The disjointed script is partially saved by some great action moments and absolutely phenomenal artwork. Hopefully this mini-series’ plot can pull it together in its final two issues.

- Advertisement -
2062
Find out how to get the
Monkeys Fighting Robots magazine!

Released by Marvel Comics on September 23, X of Swords - Creation #1 kicks off the next big X-Men event that the X-titles have been setting...
Read more
IDW

Sonic The Hedgehog #32 from IDW Publishing is out this week and marks the end of Ian Flynn’s run as writer for the series....
Read more
Comic Book Reviews

Review: The Search For Salvation Begins In ENGINEWARD #3

ENGINEWARD #3, available from Vault Comics on September 23rd, sees Joss and her friends embark on a mission to find the seed that could...
Read more
Comic Book Reviews

Review: The Chase Continues In WYND #4

WYND #4, available from BOOM! Studios on September 23rd, find the fleeing quartet desperately trying to get to Northport with the Bandaged man hot...
Read more