Why is the show called Outcast? In the latest adaptation of a Robert Kirkman comic book series, Outcast gives a hearty amount of exposition and world-building without completely showing its hand. What we do get are good looks into our main cast, and at least a general understanding of what the evil forces in this show are capable of. The pilot episode, “A Darkness Surrounds Him,” gives the audience enough to keep them out of the dark by thrusting them right into the darkness, right along with our protagonists, as they get to exorcising.

We don’t get a clear answer to what makes Kyle Barnes an outcast, per se, but we definitely see how a “darkness surrounds him.” After being tormented for years by his possessed mother, and leaving his wife & child after a similar possession problem, Kyle has come back to his childhood home, staying as isolated as possible. While his adoptive sister is trying to care for him, she clearly doesn’t buy into the supernatural stories that Kyle’s old friend Reverend Anderson preaches. The contrast between Anderson’s faith and Megan’s more realistic views serve as powerful voices that shows the conflict in Kyle’s head. He knows his mother tormented him as a child, but can it be explained away by a mental illness? How could he begin to explain demonic possession to Megan? We also see the mindset of the townsfolk, who mostly seem to be religious folk. While Megan and her husband, Mark, clearly don’t believe in demons, all the townspeople are God-fearing folks – Josh’s mother calls Anderson in right away once the possession starts, Florence asks Kyle to pray for Joshua, and Chief Giles lets Kyle go once he hears about the possession from his good friend Anderson. Knowing that the town buys into the demon narrative helps the audience understand why Kyle belongs here – but how does it make him an Outcast, exactly?

What seems to be the driving wedge between Kyle and the world around him is his connection to the demons. We don’t know why or how this is, but through flashbacks, we get glimpses into what happened before the present-day events of the pilot. We know that Kyle’s mother would lock him in the pantry, but that his blood can burn her. We know that Kyle can hurt the demons – they’re after his soul, but his blood will burn them. We see him beat the demon out of the finger-eating Joshua, but that his mother didn’t get off so easy, as she now lays unblinking in a nursing home bed. The biggest mystery, however, is what happened to Kyle’s wife and daughter. At the end, we see that his wife Allison appears to be possessed and attacking their daughter, Amber. But when Kyle is at Megan’s house, her daughter says HE was the one that hurt Amber, hence why he no longer lives with them. We see Kyle try to call Allison, but he can’t bring himself to speak to her. And Demon-Josh calls a fighting Kyle “stronger than Allison.” How does this all tie together? Who know how quickly into the season we’ll find out. 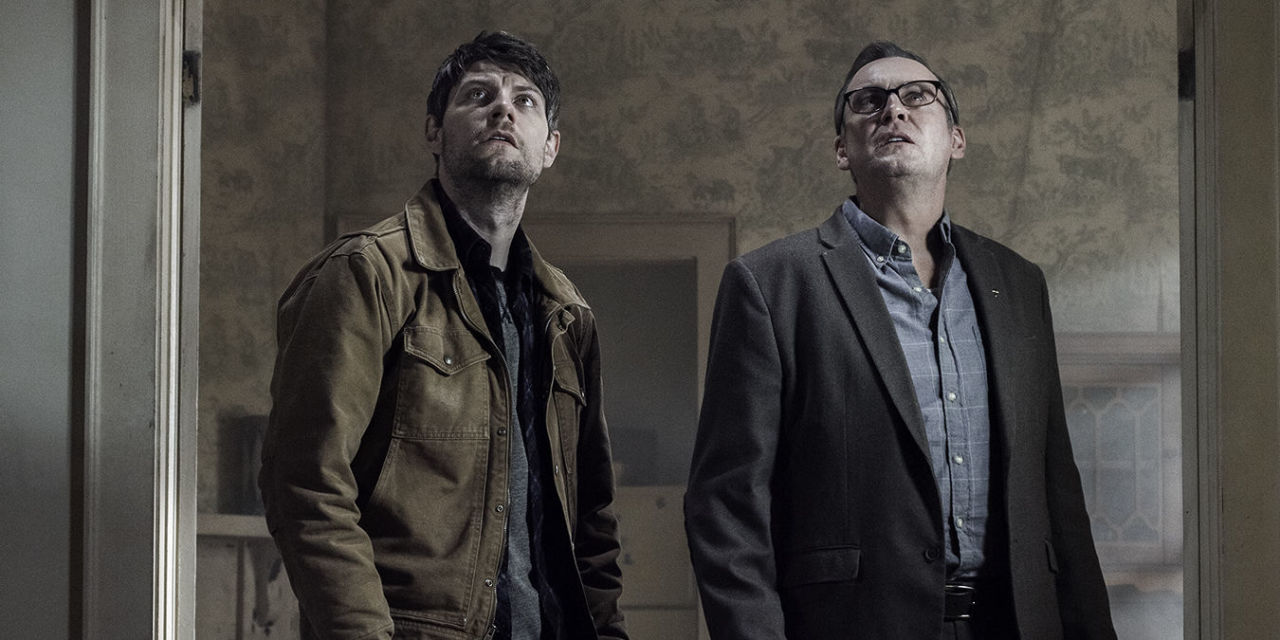 Overall, “A Darkness Surrounds Him” is a strong way to introduce us to the world of Outcast. The show provides enough exposition through natural dialogue to set up our characters, and the usage of flashbacks never felt like a narrative crutch. The introduction of Kyle and the Reverend were especially strong – Kyle, surrounded by his old childhood toys, and the Reverend playing poker with the boys before going on an exorcism trip. Not to mention the fact both have children they don’t get to see all that often (though that’s more assumed of the Reverend, through his avoidance of the picture in his car). Neither one are particularly righteous or pious, in the way you might expect demon-fighters to be. But both are human beings doing their best, in a world of the scared & the skeptical.

As far as what makes Kyle an outcast, there’s still a lot to be seen. He’s not accepted by his family, but what is it that drove them out? His mother was possessed, but does that relate in any way to what makes him painful to demons? Kirkman doesn’t give us the answers right away, but he gives us enough to understand the world, our character’s motivations, and what we can expect next.

Check out the five key moments from the pilot, and be sure to watch the pilot on Cinemax’s YouTube channel before episodes start regularly airing on June 3rd.