Academy Award-winning director Jordan Peele has returned with another thought-provoking film, Nope. A film that will undoubtedly be regarded as his most ambitious addition to his growing resume. Nope challenges humanity’s obsession with spectacle, while also serving as a commentary on Hollywood. Peele showcases his love for Summer blockbusters with his third outing and pays homage to Jaws.

Steven Spielberg sparked fear of water for many after his classic shark film was released in 1975. Peele has managed to tap into sparking fear of what lies above us when we gaze at the sky. If it wasn’t clear, Nope has solidified that Peele enjoys putting audiences through an uneasy experience. The kind that includes a few laughs along the way, but never loses the terror at its core. Nope stars Daniel Kaluuya, Keke Palmer, Steven Yeun, Keith David, Brandon Perea, and Michael Wincott. The film follows OJ (Kaluuya) and Emerald (Palmer) Haywood, a pair of ranch-owning siblings, as they attempt to capture evidence of a UFO.

OJ and Emerald come from a family that has a long history with Hollywood. Their horses are used for stunts, and their grandfather was part of the very first motion picture. After the demise of their father (David), OJ becomes desperate to secure finances for the ranch’s future. The script doesn’t explore the sibling dynamic the way I expected, but what it offers is enough to create an emotional investment in their progressions. Palmer and Kaluuya’s chemistry also amplifies their bond on screen. OJ is the stoic and introverted sibling, while Emerald serves as an extroverted and energetic character.

Peele and Kaluuya previously worked together for his directorial debut, Get Out. Kaluuya has shown his abilities as an actor in multiple projects, which makes the performance delivered in Nope that much better. OJ is written to be dry and shut off, Kaluuya brilliantly portrays the character in that regard. Emerald was the more energetic of the two, so Palmer can display a side that is more welcoming to audience members. Peele’s script includes a plot device related to the UFO causing power outages, and each time the power goes out viewers know they are about to get a suspenseful sequence. 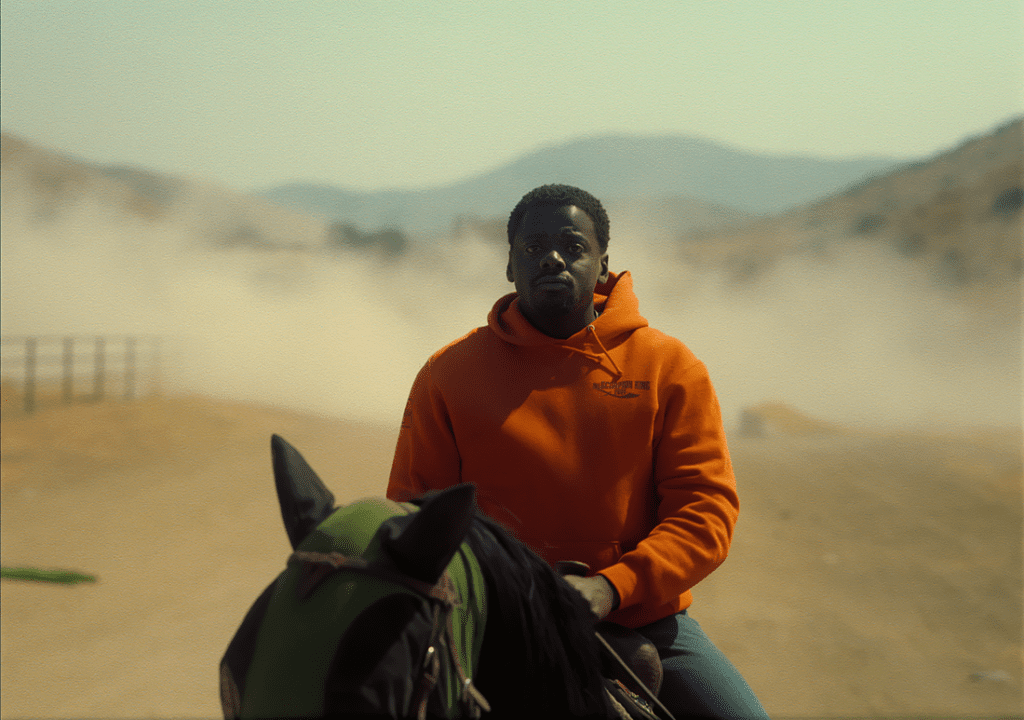 Building suspense and tension seems to be one of Peele’s greatest strengths as a filmmaker. The night sequences in Nope are both visually striking and terrifying due to the stellar cinematography. A formula is established that helps build anticipation during the scenes involving OJ or any character gazing at the sky. Kaluuya is nailing it during these moments, especially during the final act that many will consider a love letter to Jaws. Yeun stars as Ricky Jupe, a former child star that exploits a tragedy for profit in his adulthood. Jupe deserved more screentime, but the time spent with the character establishes his importance.

Despite certain side characters being underwhelming, every performance is incredible. I just believe Palmer will be the one getting praised the most. Her work as Emerald showcases how far she has come as an actress. The line delivery combined with her facial expressions demonstrates Emerald’s personality wonderfully. Emerald is also someone most people can relate to, she doesn’t want to embrace her family business, she wants to create her legacy through various side gigs. Early in the film, OJ and Emerald are kicked off a project, which sparks them to investigate the UFO to profit off the shot.

That action is a profound example of how certain crew members are thrown aside, or discarded after years of service. Nope is drenched with nods to crew members that go overlooked during the filmmaking process. The film welcomes those that are looking for their moment to step out of the shadows but still acknowledges the desperation within that fuels people to chase their spectacle. The subtext featured within Nope is what makes Peele one of the best storytellers in the industry today. Every major death that occurs acts as a final statement about the lengths humans will go to seek fame and attention.

Peele aims high with the direction on display, not everything comes together as neatly as expected, but he delivered a satisfying spectacle that should be experienced on the biggest screen possible. Moments of the story can be too vague or incoherent, so leaving room to interpret might become a hassle for certain viewers. The pacing was another highlight, sure the first two acts are slow, but Peele reels you in with another horrific opening sequence that sets the stage for what Nope has to offer. While the third act is the strongest, the previous two aren’t tiresome thanks to the performances and suspenseful sequences.

One scene, in particular, involving aliens will send chills down your spine, the pacing was amazing during this sequence. This also ends up serving as another nod to Jaws, which makes sense considering the twist that comes later in the story. The scene isn’t cut short, Peele spends time allowing the tension to build while Michael Abels’ score accompanies the unease that sets in. Abels’ score is almost a character itself, adding momentum while also securing the terror you feel throughout certain scenes. One piece titled “The Run” creates one of the best sequences in the film. A piece that highlights the stakes while relishing in the rewarding payoff.

Nope probably won’t be regarded as Peele’s strongest film, but I will say it is my favorite from him. This isn’t to say Get Out isn’t his best, but Nope just offered a more fun concept to experience. While the large scale does create problems with some of the logic and story details, Nope continues Peele’s impressive reign as a filmmaker and storyteller. This is a compelling film that appears straightforward, but Peele demonstrates that the trailers didn’t reveal all of the brilliance that is featured in Nope.

Nope challenges humanity's obsession with spectacle, while also serving as a commentary on Hollywood.Review: NOPE Brilliantly Explores Our Addiction To Spectacle