Review: NIGHTWING #82 and a Peek into the Past of the Flying Graysons

DC Comics’ Nightwing #82 is a relatively straightforward issue. It takes the twist from the finale of Nightwing #81 and explains how it could be possible. Yet, in a single issue, writer Tom Taylor, pencillers Bruno Redondo, Rick Leonardi and Neil Edwards, inkers Bruno Redondo, Andy Lanning and Scott Hanna, colorist Adriano Lucas, and letterer Wes Abbott, (what a huge creative team for this issue!) show us that we may be wrong about the characters that seemed at first to be “the bad guys.” Spoilers ahead for the previous issue, Nightwing #81.

Taylor has a lot of fun in this issue. It’s both a heartfelt look at the lives of Nightwing’s parents, the Flying Graysons, and a thriller-style history of Tony Zucco. With this issue, Taylor is showing us how Nightwing and Melinda Zucco could be related. Briefly, Taylor confuses things a little. Melinda tells Nightwing that his father didn’t have another child, but then we go on to hear a story that contradicts that. And later, when John Grayson talks to Tony Zucco, it feels like both John Grayson and Taylor overplay their hand a little. “Please accept this oversized fluffy bear and all the condescension that goes with it,” John Grayson says. It seems that the Grayson knack for taunting was perfected in a later generation. But overall, this issue is about the beautiful legacy that the Graysons created. It’s about how their lives touched more people than we know. And Taylor shows us where Dick’s drive and desire to do what’s right comes from. 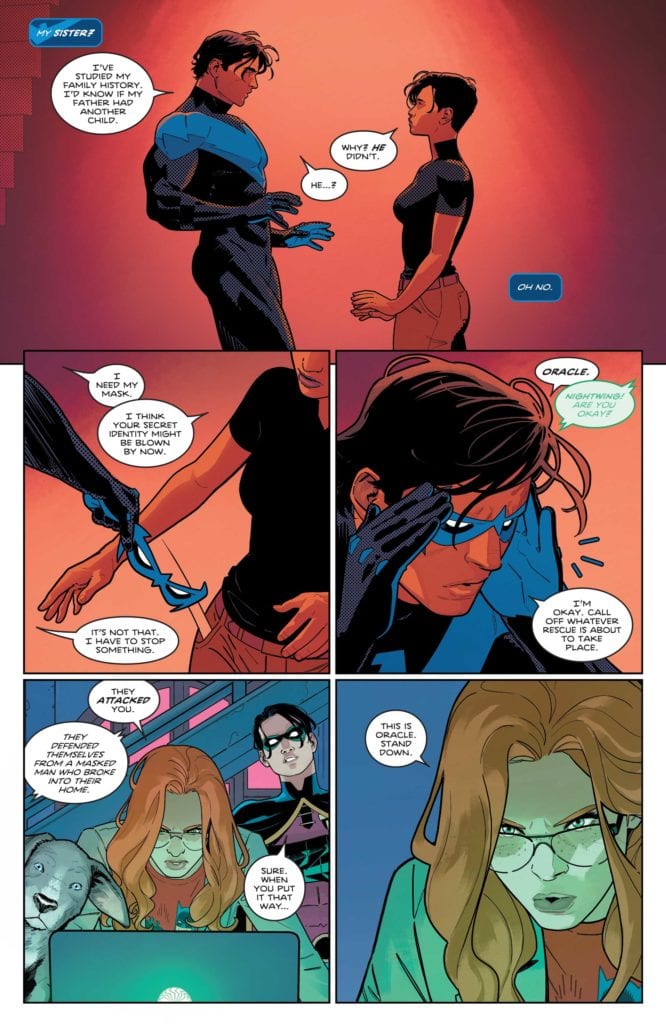 It’s no surprise this issue has a huge art team. That’s because Nightwing #82 changes art styles to tell its story. When Meili Lin, Melinda’s mother, begins her story, the issue transitions into an older style than what we’ve become used to. It’s a fantastic way to take us back to another time. The most notable change, is the use of Ben-Day dots. Redondo often uses Ben-Day dots in his art. Often they’re used as accents. In this issue, in the modern scenes, they’re most noticeable on Melinda’s shirt. But the scenes of the Flying Graysons are completed colored by Ben-Day dots. It gives the whole section a feel of being right out of the 1940’s.

Of course, the use of Ben-Day dots is also part of the job of the coloring department as well. But Lucas goes beyond that. It looks almost as though the scenes showing the Flying Graysons were depicted using the four-color coloring method. Even colors that aren’t cyan, magenta, yellow or key(black), have a look of being a muddy combination of those colors. Again, it’s a fantastic way to take us back in time. Lucas also makes a point of setting these scenes in juxtaposition to the modern scenes. Scenes of Nightwing, Melinda and Meili talking are shown in deep reds and clear blues. The evolutions of coloring in the comics industry is on full display in this issue. 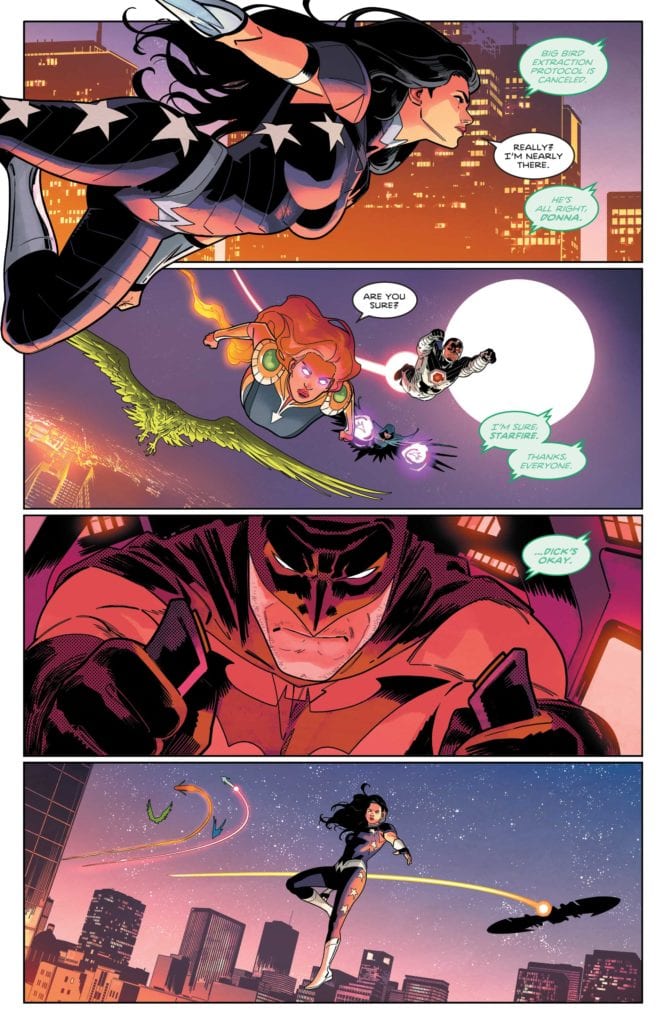 Abbott’s lettering is always a joy to behold. His sound effects are simple but effective. With every new issue, it feels more and more impressive how fresh his sound effects feel. No gunshot feels quite the same, and Abbott is always using new fonts for new situations. But one of the best parts of Abbott’s lettering in Nightwing #82, is in a scene of the Flying Graysons doing tricks in the circus. The word balloons stretch high, and then dive low, before going back up again. Our eyes, as we scan the page, mimic the movement of the Flying Graysons on the trapeze. It’s a simple trick that works brilliantly.

DC Comics’ Nightwing #82 is surprisingly fun for an issue that deals with some nasty history. That’s because this creative team is always finding the beauty in small moments. We come out of this issue, more in love with the Graysons than ever, and wondering what this team has next for Nightwing! Pick up Nightwing #82, out from DC Comics July 20th, at a comic shop near you!

DC Comics' NIGHTWING #82 is surprisingly fun for an issue that deals with some nasty history. That's because this creative team is always finding the beauty in small moments. We come out of this issue, more in love with the Graysons than ever, and wondering what this team has next for Nightwing! Review: NIGHTWING #82 and a Peek into the Past of the Flying Graysons