Review: NIGHTWING #81 – is the Fun Over for Dick Grayson?

DC Comics’ Nightwing #81 is an almost contradictory mix of fun and gloom. We’re still seeing the same Dick Grayson who was hopping over rooftops just an issue before, but something is changing. Writer Tom Taylor, artist Bruno Redondo, colorist Adriano Lucas, and letterer Wes Abbott are bringing the drama in. There’s still plenty of fun to be had, but maybe not for long.

A lot of why this issue hits home comes from Taylor’s work on the series so far. Taylor set up a fun status quo. We’ve connected to Barbara, Tim, and Dick as they’ve hung out and shared pizza. So, when Heartless shows up, threatening to put an end to those days, we care. We’ve become attached enough to the good life that Taylor has presented, that Taylor’s threats to take it away are just as moving. And as we move into a more complicated chapter, we hold that vision in our minds. We hold onto the hope that though things may get rough, the characters can get back to the joy we’ve seen them share.

At one moment, Taylor does something a little familiar. As Dick, Barbara and Tim talk, Tim tells Dick, “Bitewing was pretty worried about you.” That’s the name Tim has given Dick’s new dog. “Bitewing? That’s… actually a great name,” Dick responds. This feels like a little joke Taylor is telling. But Dick saying it’s a great name feels like Taylor holding up an “audience laughter” cue card. Rule #1 of comedy is that you can’t tell people when to laugh. Your jokes ought to speak for themselves. There is so much charm to Taylor’s scripts. They’re brilliant, fun, and moving. But when Taylor seems charmed by them too, it takes a little of the magic away. Though, ultimately, this is a small blemish on the face of an otherwise fantastic script. 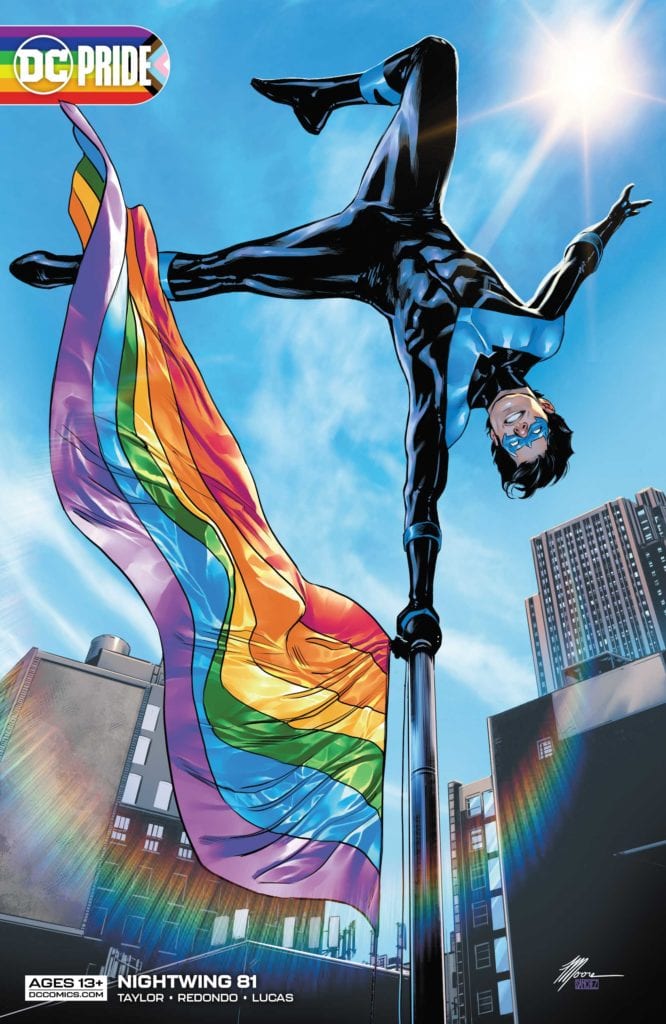 Even in the midst of high stakes and dramatic moments, Redondo adds movement and levity. When Heartless takes a shot at Dick Grayson, then puts his gun away, we see it in a tiny panel in the corner. On the next double-page spread, we see their fight. It ends when Dick catches his baton in a little panel in the same corner. It creates a playful repetition to the scene, making the fight feel just as much like a dance as a battle. Later, when Nightwing fights with someone on a staircase, the panels follow the action. Redondo places the stairs on the page and separates each jab and punch with a gutter. It’s a gorgeous way of presenting a scene, showing the full staircase on the page, but then showing the individual moments of the battle too.

Lucas’ coloring is a source of a lot of the dread in this issue. As Nightwing fights Heartless, the fire around them mingles with the night air to look red. This continues through ten pages of the comic. It sets a tone and creates a shift in the mood. Later, when the danger seems to have passed, Dick Grayson lies in bed. The color of his room is a cool blue. But outside, the night air still looks red. Something is changing in Nightwing’s world, and Lucas is showing us that moments of safety are fleeting. 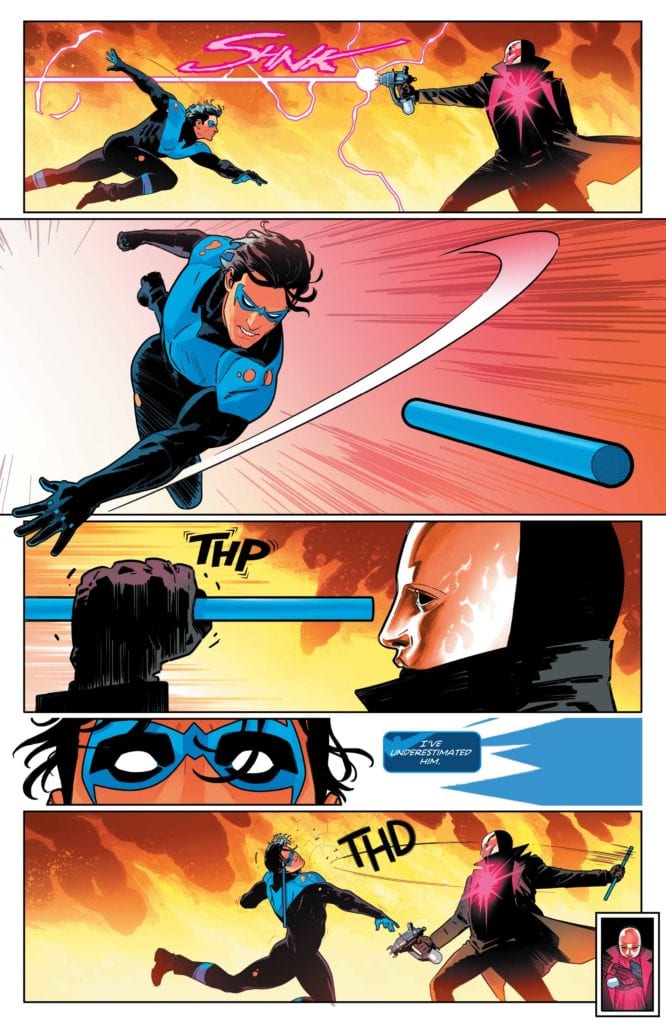 Abbott has always had a wonderful ability to make everything feel fun. I have spoken many times about the little tailored sound effects he uses for each noise in a script. No sound effect looks the same. This is on full display in this issue. The white “PSSSHHH” of a fire extinguisher actually mimics the movement of the foam. The “SHNK” of Heartless’ gun is messy and otherworldly. But even small moments have subtle differences. The “THP” of Heartless catching one of Nightwing’s batons looks so close to the “THD” of him then whacking Dick in the face with it. But the “THD” has a fuzzy outline, mimicking the ringing in Dick’s ears. From the big “BWOKs” to the tiny “CLKs,” Abbott is making everything a blast.

DC Comics’ Nightwing #81 is a shift in gears. Now that this creative team has shown us the good life, they’re threatening to take it away. They have done their work beautifully. They’ve made us care about these characters deeply. And now that things are taking a turn for the dramatic, we’re all already bought in. Pick up Nightwing #81, out from DC Comics June 15th, at a comic shop near you!

DC Comics' NIGHTWING #81 is a shift in gears. Now that this creative team has shown us the good life, they're threatening to take it away. They have done their work beautifully. They've made us care about these characters deeply. And now that things are taking a turn for the dramatic, we're all already bought in.Review: NIGHTWING #81 - is the Fun Over for Dick Grayson?