DC Comics’ Future State: Dark Detective #2 is a double feature, starring Bruce Wayne and Red Hood as lead characters. Mariko Tamaki writes the first story, “A Sign,” with Dan Mora on art, Jordie Bellaire on colors and Aditya Bidikar on letters. This is part two of a story following a “dead” Bruce Wayne, hiding from the many eyes of the Magistrate. “Mask Alert!” is written by Joshua Williamson, with art by Giannis Milonogiannis, colors by Jordie Bellaire and letters by ALW’s Troy Peteri. “Mask Alert!” shows us that Red Hood seems to be working for the Magistrate, hunting masks. Both stories show the chaos and mayhem of Gotham under a new leader.

Tamaki takes a very interesting route in this issue. She explores our fear of technology and being controlled. Bruce, in this chapter, lives with a conspiracy theorist named Noah. The man has his water brought in in bottles, for fear of mind controlling nanobots. And while we may look down our noses at a character like Noah, he’s not so different from a certain Bat. In fact, as the story progresses, Bruce becomes more and more empathetic to Noah. He even wonders if Noah might be onto something. So, while this issue is about conspiracy and fear, it explores it from a human angle. It shows how we all get a little scared when we don’t feel in control. In a moment in history where conspiracy and fear are proving to be destructive and immune to reason, Tamaki takes a step back and tries to understand instead of condemn.

Mora continues to create a visual essay of chaos and order. We see Bruce, garbed in his new Batman suit, fighting one of the Magistrate’s “Cybers.” The next image is Bruce Wayne in civilian clothing, with the exact same expression. But Mora is showing us the difference between these situations. Because the next image we see of Bruce is unfamiliar. He’s wide eyed and panicked. You could almost call him feral. And as he sinks into the Gotham river, his face is equally unfamiliar. A look of resignation and disappointment. The Magistrate’s rule is that of an unflinching machine. So Mora pushes Bruce to be different than usual. He pushes him to emote, instead of being the stern Batman that we know. It actually creates distance between this Bruce and the Bruce of the past. And it makes it that much easier to side with him. It’s a human, desperate and panicked, versus a corporate machine. If this were any other version of Bruce Wayne, it would have been harder to see the difference. 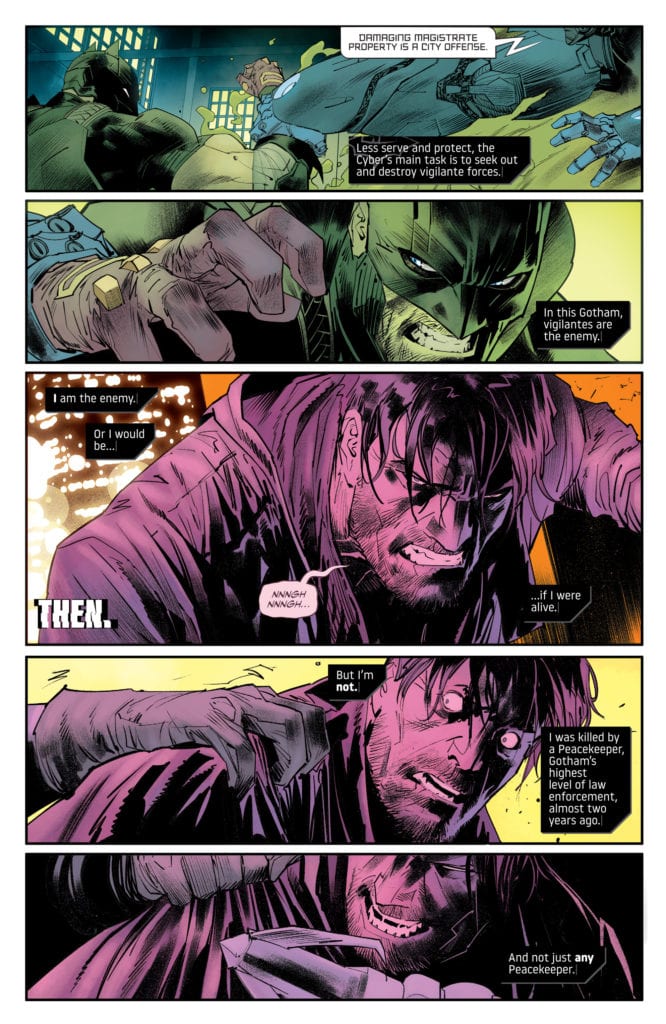 All of Bellaire’s most beautiful scenes also happen to the most dangerous. As Bruce runs for his life from a Peacekeeper, one of the Magistrate’s goons, Bellaire makes the scene look stunning. The bright yellow lights in the background, Bruce’s pink hued and panicked face in the foreground. And as Bruce falls into the Gotham river, the light of the neon signs filter through the water to turn the whole panel into a brilliant pink. It’s juxtaposed by scenes of Bruce investigating at night. The pale blues and greens are still beautiful, but monochromatic by comparison. Then, running from soldiers, the page comes alive again. Bellaire has the red light of Bruce’s motorbike look like a streak across the panel, following his movements. And the chase through the streets is colored by the dots and bars of yellow, red and blue lights of Gotham at night. Bellaire is lulling us into a sleep, then waking us up with bright colors like an alarm going off.

Bidikar doesn’t just letter a work. No, Bidikar makes their lettering as much a work of art as every other aspect of this issue. The spacing, the fonts, the size, everything works together so you can hear every word clearly. At one point, Noah’s daughter comes to visit and is ticked off by someone taking a picture of the house. She yells at the woman with the camera and tells her not to get on her last nerve. The words “My,” “Last,” and “Nerve” are each given their own tier of the word balloon, getting bigger as they go. You can hear the anger rising in her voice. And as Noah has a melt down, Bidikar does something similar. His first line of dialogue is small, but still full of feeling through a brilliant use of bold. And then he yells again, this word balloon has bigger font and a jagged edge. His final line has font three times the size of his first. Bidikar carefully shows what it’s like to have panic sink in. Williamson’s script works best when it leans on the art. He sets the scene brilliantly with nearly silent pages. Red Hood and Vigilante in a motorbike chase, or Red Hood following clues through a dilapidated neighborhood. These moments are clear and strong. Occasionally, Williamson writes the kind of thing that just wouldn’t be said. Officers at the precinct comment a little more on their day to day activities than you’d expect, considering they are in fact day to day. Jason is often piecing the plot together out loud. And when Ravager arrives on the scene, she comments a little too much on their dynamic. Some of it actually works. Ravager is the type of character to hold a conversation with herself if Jason won’t join in. But there are a few too many times it feels more like the writer trying to communicate plot than two people having a conversation.

Milonogiannis’ art is definitely the highlight of this story. It won’t work for everyone. It’s a very cartoony style, especially for a Red Hood story. But that’s part of what makes it work. The playful, even funny, visuals helps cut through the seriousness that often surrounds Jason Todd. In fact, much of this story reads like Jason is wishing everyone would take him seriously, but they won’t. That’s especially true of Ravager. Milonogiannis presents moments of gore and violence with levity. Someone is sliced in half by Ravager who has a smile on her face. It’s perfect for her. She was raised to be a killer, so nothing fazes her. Milonogiannis makes the story incredibly fun. 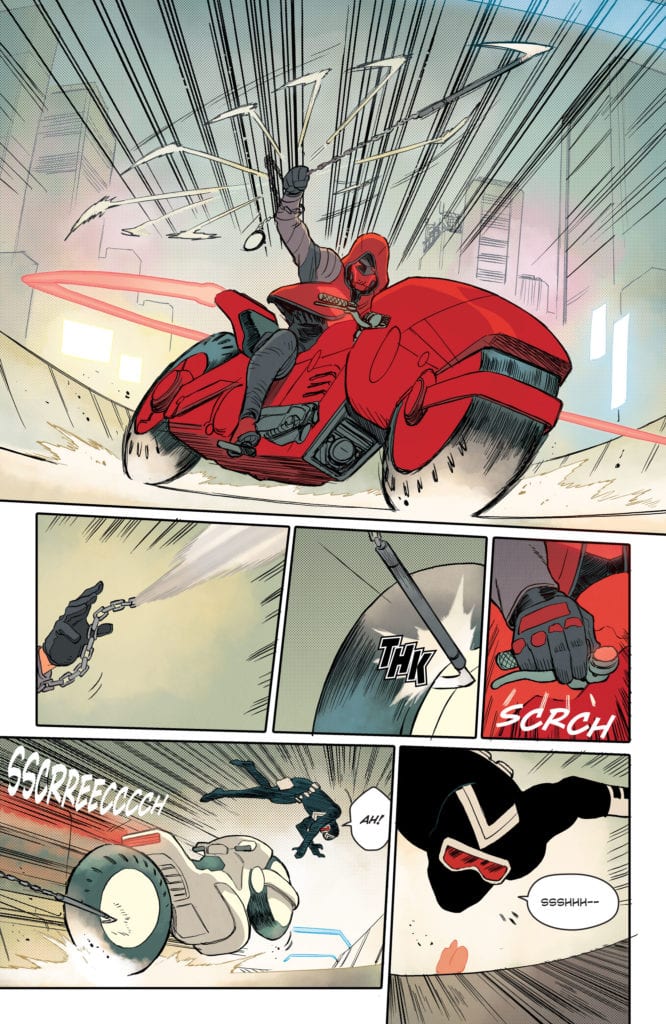 Bellaire’s coloring brings what’s important to the forefront. Characters are colored in deep reds, oranges and blues, while the backgrounds are pale and grey. Except when Ravager shows up. The background goes from grey to a beautiful purple. There are floating dots of pink and blue. As much as Jason tries to ignore her, Bellaire shows us there’s something between them. An energy that lights up the room. And as the backgrounds revert back to their greys and blues, Bellaire is reminding us these are characters that can leave this world behind. They don’t have to be trapped here in a bleak environment. It’s Jason who’s stuck in a cage of his own design.

Peteri is quite experimental in this story. Most of the experiments really work, some fall short. Whenever a character swears in this story, Peteri places a “#@*!” on top of a black background. It’s definitely eye-catching and different, but placed in larger texts it looks a little odd and distracting. But Peteri does some other things that really work. When Ravager is asking Jason question after question, he finally responds, begrudgingly. His word balloon has some slightly flattened edges to it. It’s a visual representation of his disdain. The same thing happens when he says a villain’s name. Peteri brilliantly shows us moments where Jason’s rage bubbles to the surface.

DC Comics’ Future State: Dark Detective #2 shows the chaos of Gotham under the Magistrate. And it does so on both sides of the aisle. Whether you’re working for or against the Magistrate, your life is in the crapper. Pick up this great new issue, out from DC Comics January 26th, at a comic shop near you!