Review: MALL #1 Is A Sharp, Intense, And Haunting Look At Consumerism in America

It’s Dawn of the Dead meets The Warriors, and it’s f*cking badass.

Mall #1 is out August 28th from Vault Comics, and it’s an action-packed look at consumerism gone wrong that you absolutely have to read.

The world has ended, and The Mall is all that remains. The residents within are divided into warring gangs that live by two rules: “protect what’s yours, and take from whoever’s stupid enough not to do the same.” Andre Walker, heir to the Gacy’s empire, is framed for the murder of a tribal leader and forced to navigate this treacherous landscape to prove his innocence.

It’s Dawn of the Dead meets The Warriors, and it’s fucking badass.

The series is by writers Michael Moreci and Gary Dauberman, and artist Zak Hartong, with colors by Addison Duke, and letters by Jim Campbell. 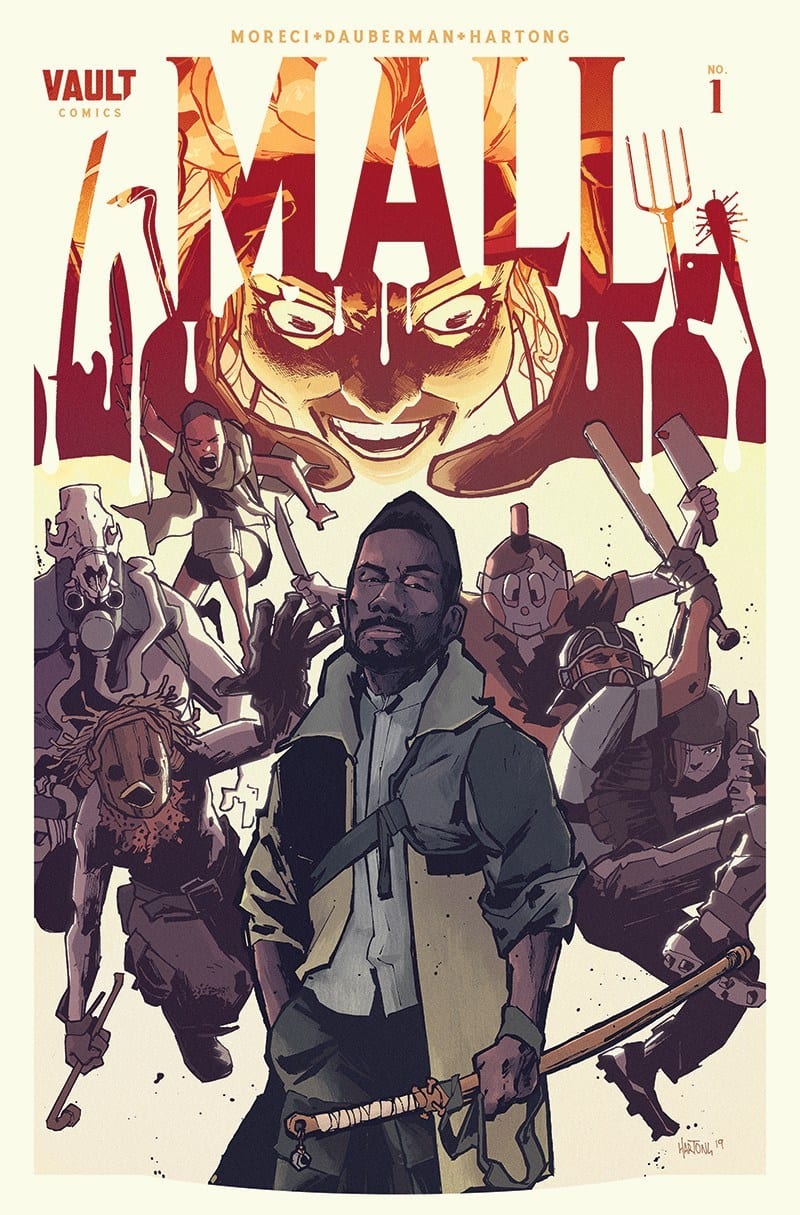 First off, Moreci and Dauberman write one of the best opening pages to a series that you’ll ever see. It’s the epitome of “simple yet effective.” In just five panels and ten (short) caption boxes, we’re given everything we need to know about this world. It sets a bleak and gritty tone. Not only that, but it’s told in first person narration, so it builds a personal connection to the reader. We’re not being lectured to; we’re having a conversation. The voice establishes a sort of punk rock, nihilistic atmosphere: the world ended, nothing else matters, let’s get on with the story.

This vibe is solidified by the outstanding art team. Hartong’s linework is gritty; he makes the world feel not only lived in, but worn out from years of violence. His action scenes feel raw and unbridled. Duke then utilizes a muted color palette to emphasize this dark, bleak future, throwing in splashes of brighter, more vibrant colors to make certain moments pop. Campbell actually does the same thing with his letters, throwing in some hot pink sound effects during an action scene. His lettering is otherwise styled in a way that further grounds the story in reality, and it guides your eyes through this hellscape with great ease. Mall has a very unique, intense feeling, and that’s due largely to the art and lettering.

After the opening page, Mall throws you right into the action. Multiple mysteries are set up in the first few pages; there’s an intriguing element of “what the hell is going on?!” that will keep you reading, and then have you demanding the next issue ASAP. Every page is thrilling and engaging, thanks to the explosive art from Hartong and Duke. Every panel feels necessary. Between the intrigue and the action (oh man, this is a bloody comic), there’s not a slow or dull moment between the covers. All of the exposition, worldbuilding, and character development are woven seamlessly into the story. This is a debut issue done right.

This team is telling an exciting story, but if you look under the hood, you’ll see that it’s also a very clear commentary on consumerism and capitalism. As stated earlier, “the world has ended, and The Mall is all that remains.” The society within the mall is a caste system, with power directly tied to wealth. Gangs are named after brands and stores; they’re literal mascots. Our protagonist, Andre, is called “heir to the Gacy’s Empire,” which sounds an awful lot like a certain department store you’ll find in most shopping malls.

Even after the apocalypse, America still values money above all else. The rich are still in charge, only now they don’t have to hide in the pockets of politicians.

Just typing those words filled me with rage, and that’s the true power of Mall. It feels relevant. It feels like this could actually be our future if society continues down its current path. That’s perhaps the most interesting thing about this comic, and it’s definitely the most terrifying.

And Andre seems to be the only one who can see the insanity in the way their society is run, which instantly puts the reader in his corner and makes him an endearing hero worth rooting for.

Mall is the best kind of comic: the kind that nourishes your brain with intelligent, well thought-out commentary while also entertaining the hell out of it. Vault is on a hot streak – maybe one of the hottest the industry has ever seen from an indie publisher – and this series is just another notch in the win column.

FOC (Final Order Cutoff) for Mall #1 is August 5th; call your local comic shop this week and tell them you want it!

MALL is the best kind of comic: the kind that nourishes your brain with intelligent, well thought-out commentary while also entertaining the hell out of it. And it has one of the most effective opening pages of any comic this year.Review: MALL #1 Is A Sharp, Intense, And Haunting Look At Consumerism in America