Neil Gaiman’s Sandman has left an unforgettable mark on the comic book industry. And in recent years, we’ve seen comics that feel like descendants of the series. Joe Hill and Gabriel Rodriguez’s Locke & Key is one such series. So it’s fitting, and very exciting, to see these worlds collide. IDW Publishing and DC Comics partner to bring us Locke & Key/Sandman: Hell & Gone. But in this first issue, writer Joe Hill, artist Gabriel Rodriguez, colorist Jay Fotos, and letterer Shawn Lee seem a little daunted by the task at hand.

Hill’s Locke & Key is charming and brilliant. It seamlessly mixes horror with moving character development. The same could easily be said of Gaiman’s Sandman. So it’s a little odd that Hill’s script for this first issue is so clunky. Lots of characters deliver dialogue that feels out of place, often in the form of exposition dumps. And Hill’s versions of some of Gaiman’s characters don’t seem to be themselves. Cain speaks in a way that’s giddy and more verbose than we’ve seen him. But ultimately, these are all problems that are typical of a first issue.

Any writer starting a series would be overwhelmed by all the information they have to convey. Add onto that all of the pressure of playing in Gaiman’s proverbial sandbox (pun totally intended) and you can see why Hell & Gone #1 suffers from these issues. Hill is a capable writer, finding his footing in a world that isn’t totally his own. If Hill’s track record tells us anything, this issue is just him struggling to his feet. Once he’s comfortable, we’re in for a wild ride. 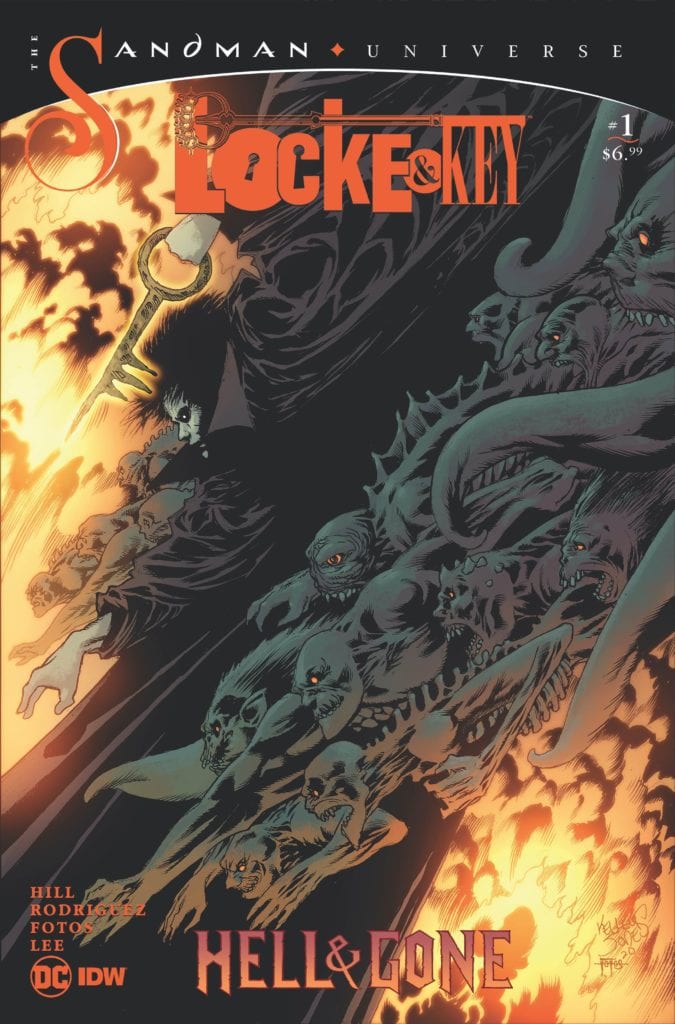 Rodriguez suffers from some of the same problems. His art is beautiful, and with every issue of Locke & Key he pens, it gets more nuanced. But one of the Sandman characters we meet, at the start of the issue, looks very unlike his appearance in the parent series. While that starts us off on a confusing note, the excitement of seeing Rodriguez’s versions of some of our favorite characters quickly eclipses that feeling. His landscapes and character designs will leave you wondering why he never did work on the original Sandman series. He’s perfectly fitted for it.

Fotos’ choices in this issue are interesting. The entire issue uses subtle coloring. We don’t get any striking pages of deep colors. At first, the only truly colorful things in Hell & Gone are things of magic. We see a deep purple energy come from the Anywhere Key and a red glow from the Dream Stone. But when we see the Dreaming, we’re seeing a world of magic. Some of that magic is nightmarish, to be sure. In those instances, the bleak color palette is fitting. But occasionally, we see landscapes that are just a little too pale to be breathtaking. Perhaps there’s a reason for Fotos’ reserved approach, but this issue has a tendency to feel a little visually bland. 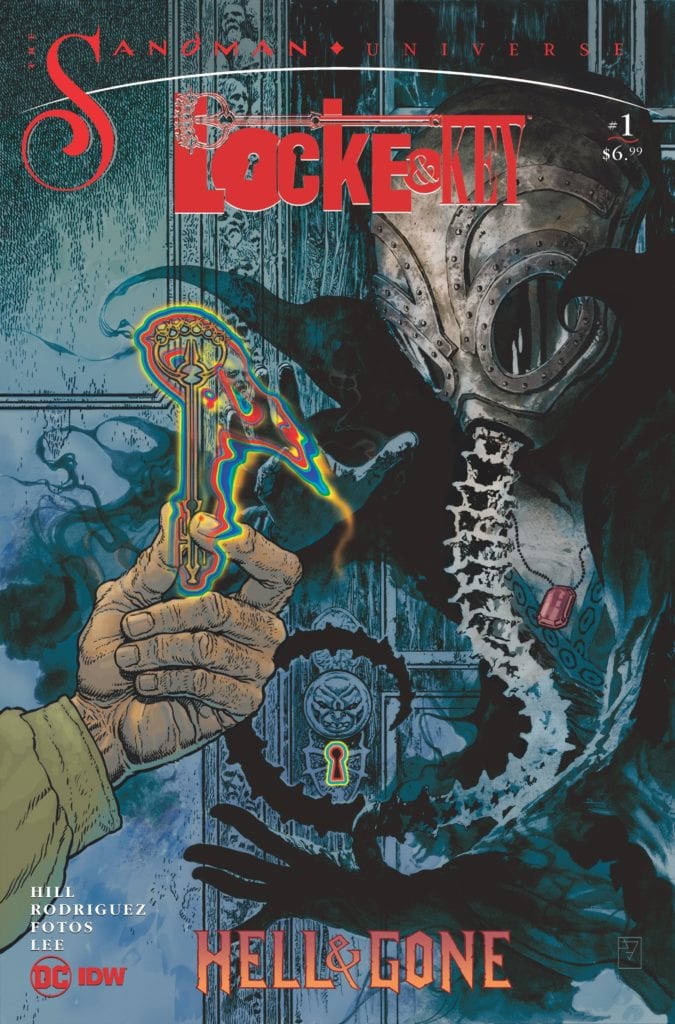 Lee’s lettering seems equally reserved, with a few exceptions. These pages aren’t littered with big sound effects or much experimenting with fonts. At one point, as Mary Locke stumbles onto something horrific, her font changes. “What’s that about your buddies Willard and…” she says in a simple, polite way. She follows up with “AHHHHH GOD OH GOD OH FUCK!” in messy, big lettering. Her panic is clear. But this is a highlight in an otherwise run-of-the-mill approach to the lettering. Hopefully, in the issues to come, we’ll see Lee attempt new things that bring life to the page.

IDW’s Locke & Key is charming and exciting, DC Comics’ Sandman is mysterious and moving. With these worlds colliding, we have reason to hope Locke & Key/Sandman: Hell & Gone will be all of the above. The first issue shows a creative team that’s nervous to enter a new world. But it’s all the shortcomings typical of a first issue. This creative team has shown themselves to do brilliant work in their prequel series In Pale Battalions Go. Hopefully, we’ll see them bring some of that magic in future issues. Pick up Locke & Key/Sandman: Hell & Gone #1, out from IDW April 14th, at a comic shop near you!

HELL & GONE #1 reads like the creative team is a little nervous. They’ve been given the keys to the toy chest, but don’t seem totally comfortable getting right to playing. It’s a bumpy first issue to a series that still has lots of potential.Review: LOCKE & KEY/SANDMAN: HELL & GONE #1 - A Bumpy Start