If you’re looking for range in a comic book publisher, you’d be wise to pay attention to It’s Alive. This October, It’s Alive published a delightfully positive, brightly-colored sci-fi adventure called Pink Lemonade, which combined the best parts of Jack Kirby’s art and Evel Knievel’s stunts. Now, It’s Alive has changed gears entirely, drawing us into a dying world and the stories of those surviving there in Justin Madson’s Breathers. Breathers is an anthology title set on an earth without fresh air. The characters’ lives are very different, but they all share a similar strife. Without their titular gas masks, they couldn’t live.

Breathers happens in four short segments. In the first, Damsel in Distress, we see this world through the eyes of little Mara, who escapes the harsh realities of her home by playing make-believe with her stuffed dragon. The second story is The Wealthy Bachelor, a guy-meets-girl tale that would be right at home in a rom-com format, but affected deeply by the world’s necessary face gear. The third is Filter K, which gives us a window into crime and law enforcement on this dying planet. And finally, there’s Bedtime, which returns us to Mara’s home. This time, though, it’s through eyes of her mother, for whom an imaginative escape is not an option. Each of these segments is heart-wrenching for its own reasons, and though we get very little time with each character, Madson’s masterfully turns them into fleshed-out, lovable and deeply relatable people. 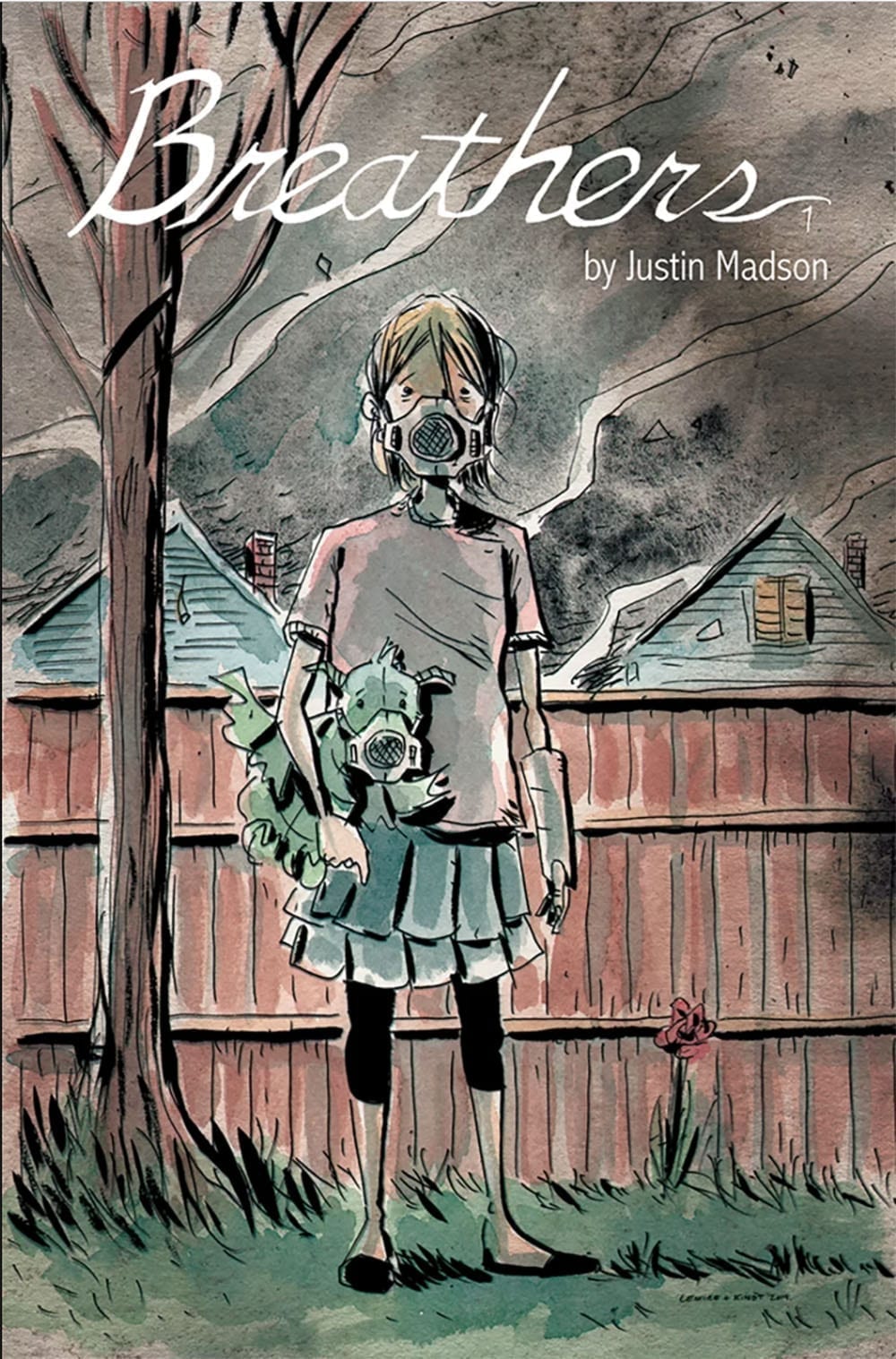 The most appealing thing about the short stories in Breathers is just how localized they are. Madson doesn’t ever get in to why the Earth has so little oxygen, or plot out some quest to save it. Instead, his stories accept the world’s condition as a fact of life, tracking with the down-to-earth, human drama that springs out of it. These stories are tiny, intimate moments between one or two characters. They relying on the emotional weight of their interactions rather than flashy sci-fi imagery. In a market with an annual schedule of reality-altering crossover events, Madson’s commitment to his grounded world is a refreshing change of pace. It gives his stories more space to grow or, if you’ll forgive the joke, breathing room. 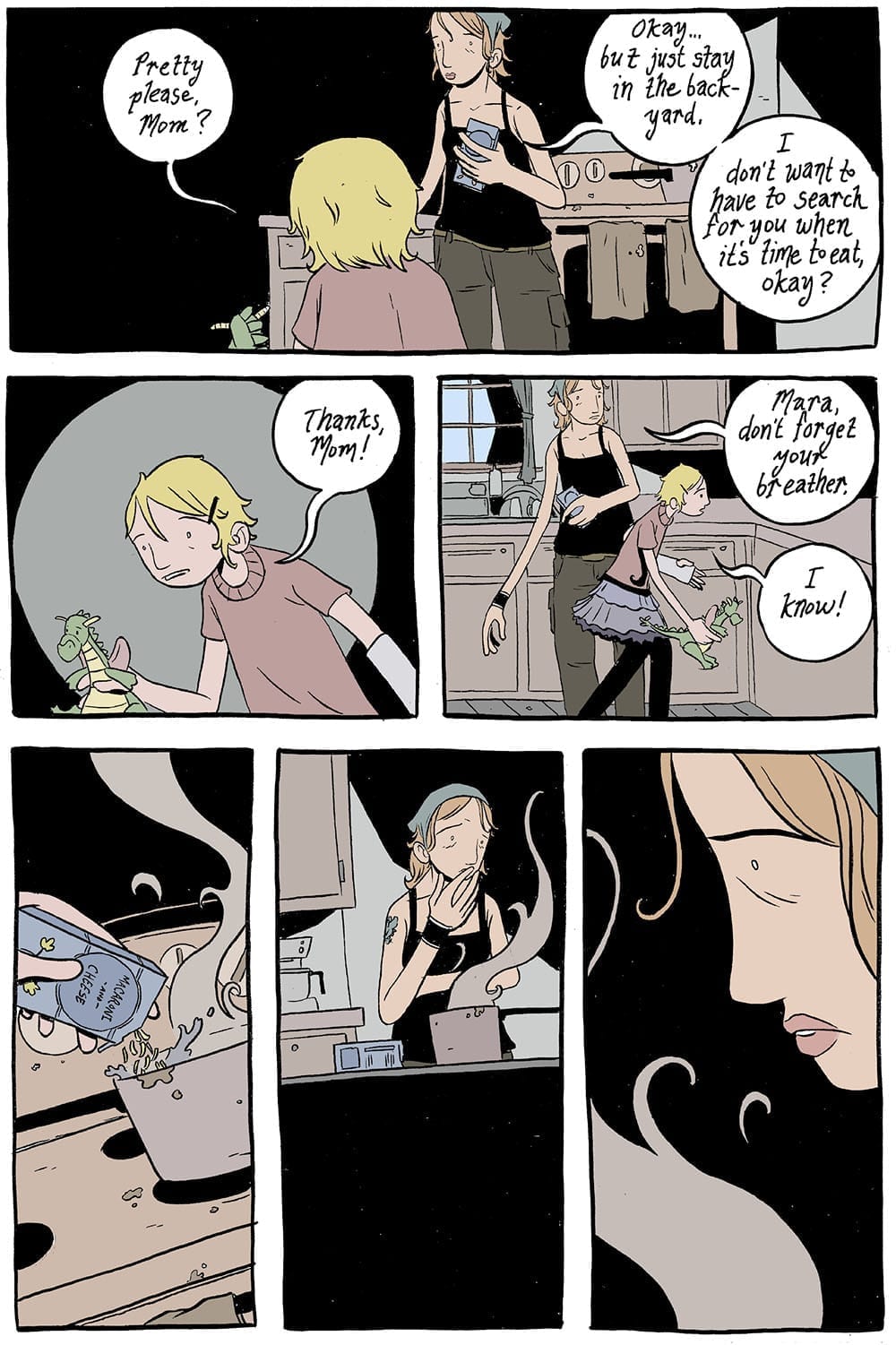 There’s a passage in Scott McCloud’s Understanding Comics about the relatability of characters with minimal features. The more simplistic the face, he says, the easier it is to apply to anyone, whereas a character with more “realistic” features will start to look like a separate, therefore not relatable, person. Justin Madson’s character designs put this theory to the test and prove it exactly right. These characters, though distinct in their personalities, are fairly universal in their designs. They could be you or me, or even more terrifyingly, our loved ones. These character designs aren’t realistic: they’re real.

Oh, and have you seen the Jeff Lemire/Matt Kindt cover?? 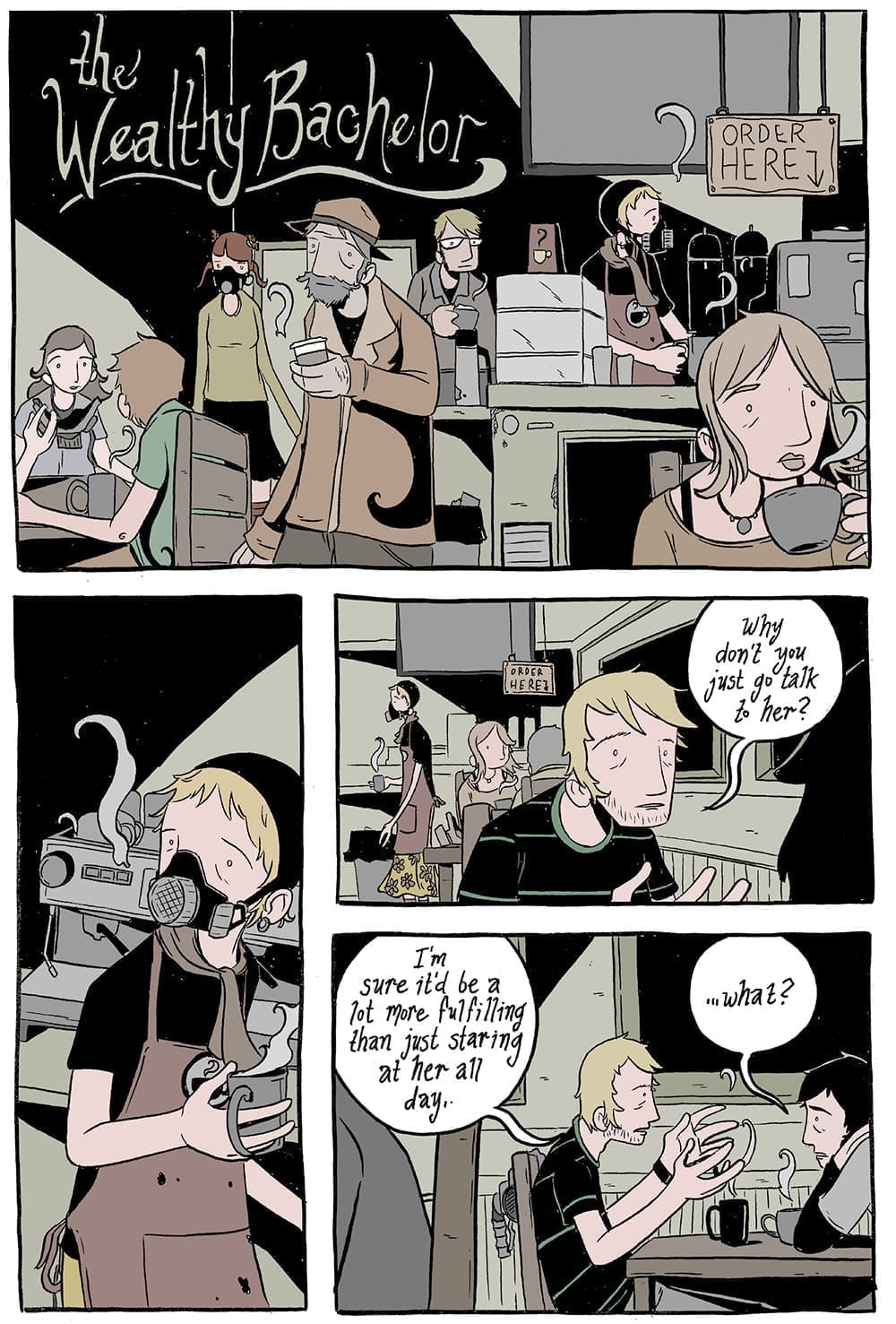 When Madson originally self-published Breathers, the comic was entirely in black and white. This probably lended itself to the grim state of the world, accentuating the hopelessness you see the characters going through. And if Justin Madson was a lesser comic creator, adding color to this book might have brightened that mood.

Simply put, it does not.

Madson’s bleak color pallet gives a reader the distinct message that the natural world is dying. Don’t get us wrong, it’s not quite apocalyptic, though it’s not far off. Madson has crafted a look that’s kind of a “nuclear fall,” toeing the line between our world and post-civilization, but not quite crossing it. This, more than anything else in the book, does the job of unsettling the reader. After all, it’s easy to separate yourself from a world in flames that looks nothing like your own. The creepiness of Madson’s earth is the familiarity it shares with our own. 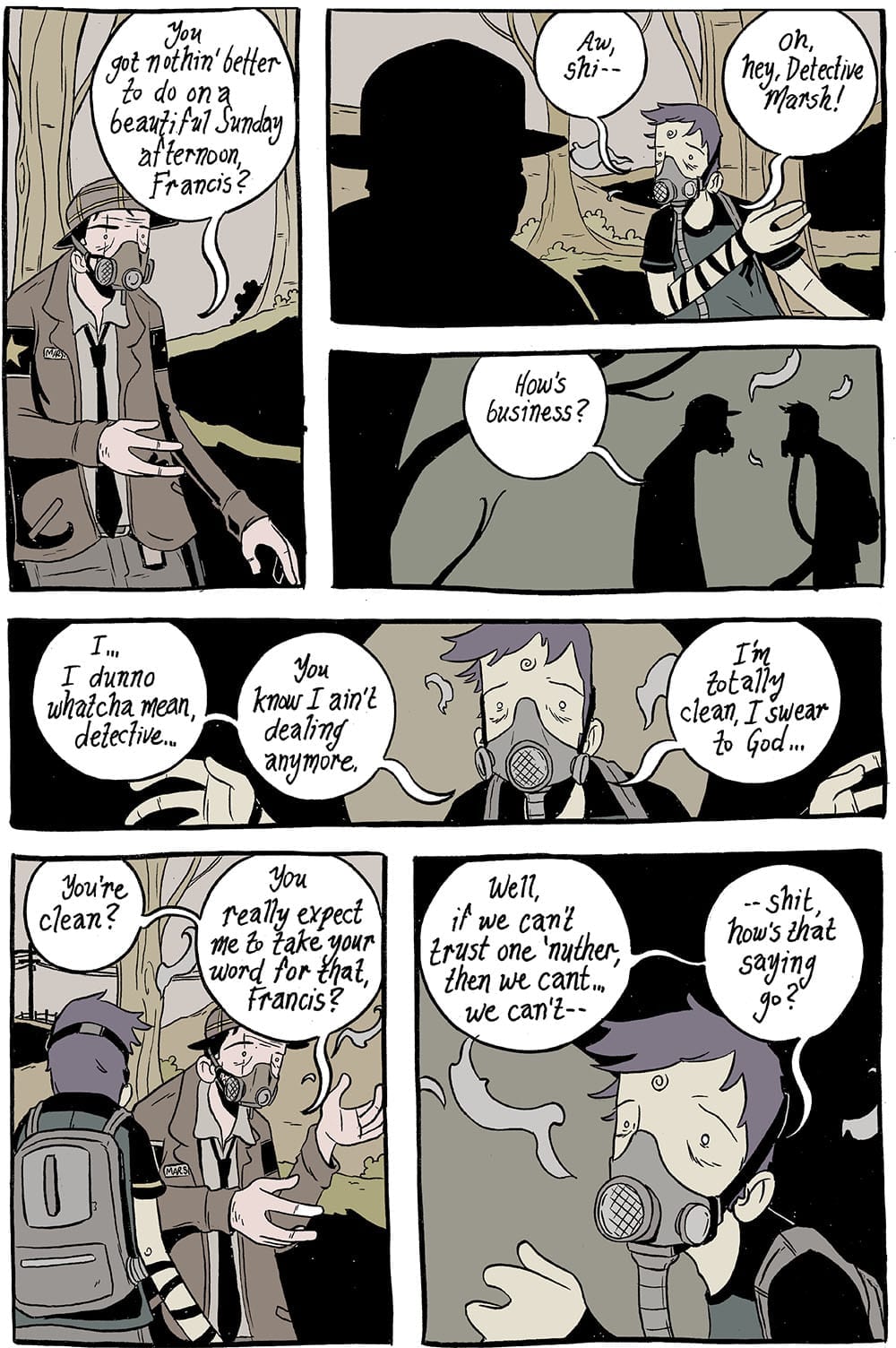 Breathers makes the best use of unconventional comic lettering since Richard Sala. Like Sala’s work, the speech bubbles and letters Madson uses are shaky and unsure. They’re completely different from the sturdy, determined speech captions of your average hero book. When you hear these characters’ voices in your head, they come out nervous, and you can’t help but feel the same way. Far from being just a n added touch to the already unsettling mood of this book, the lettering is one of its pillars, driving home the oncoming doom of its world in a concrete way that’s also entirely consistent with the book’s art. If you’re a comic reader that overlooks the lettering, Breathers is a great place to start paying attention. 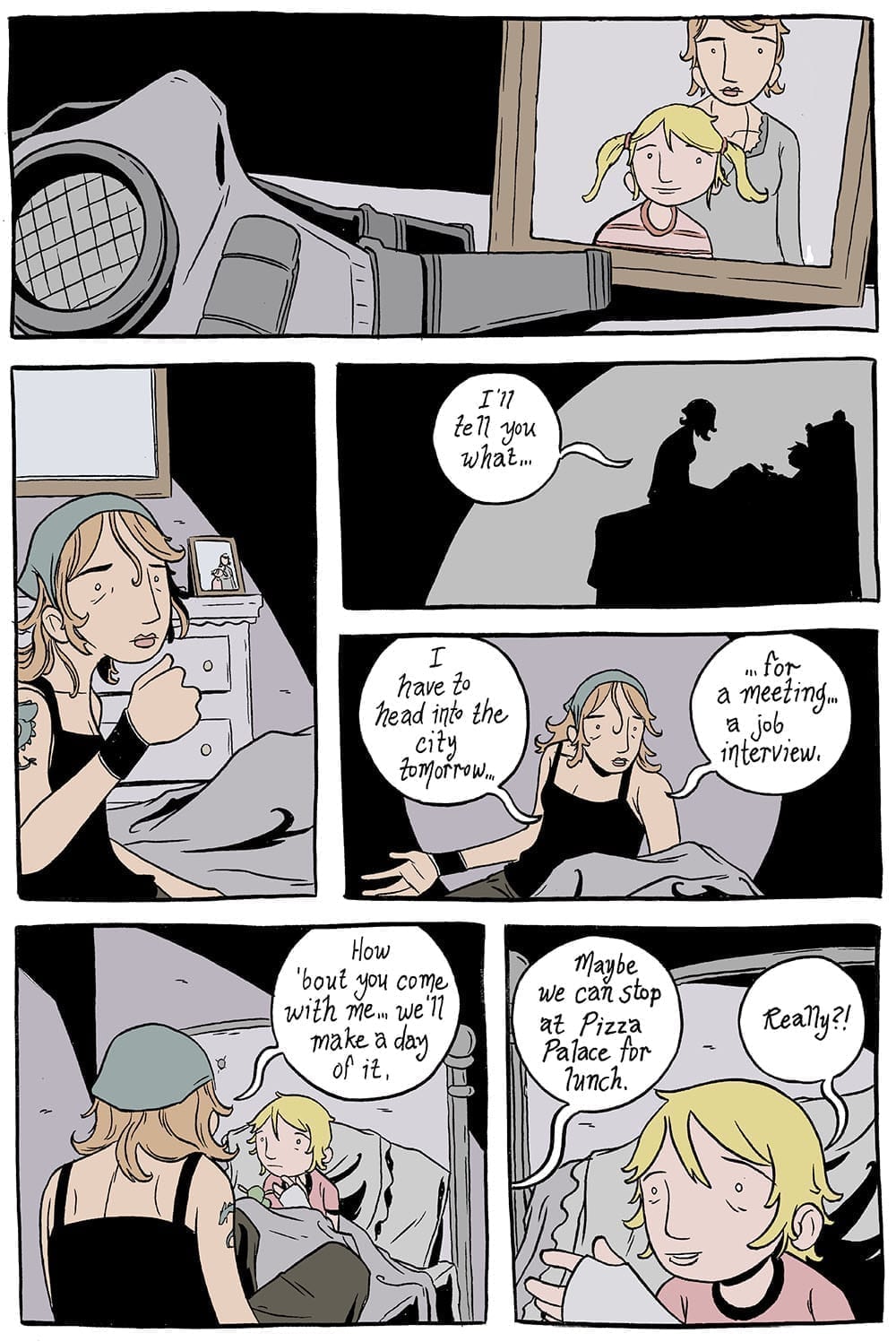 According to an interview with Newsarama, Justin Madson has been working on Breathers since the late-2000’s, when he hand-copied the pages of the book and distributed them himself. Years later, Breathers had culminated in an indie comics masterpiece, a story that is prescient but not preachy, full but not flashy. The only criticism of this book we can offer is that there could be a more diverse cast of characters. We get a great sense of the world of Breathers already, and telling the stories from a wider variety of viewpoints could flesh out that world even more, connecting it to even more readers.

Still, there are plenty of Breathers stories left to tell, plenty of opportunities for Madson to explore those viewpoints. Madson has set up a framework that could expand for years and never get boring, and if Breathers gets the attention it deserves, we’ll see those stories on shelves soon.  If you want to help get Breathers into the world, you can order a copy to your local comic book store, or over at It’s Alive’s website. Whether you’re interested in supporting indie books or just getting a fellow comic reader something great for the holidays, Breathers is worth every cent. 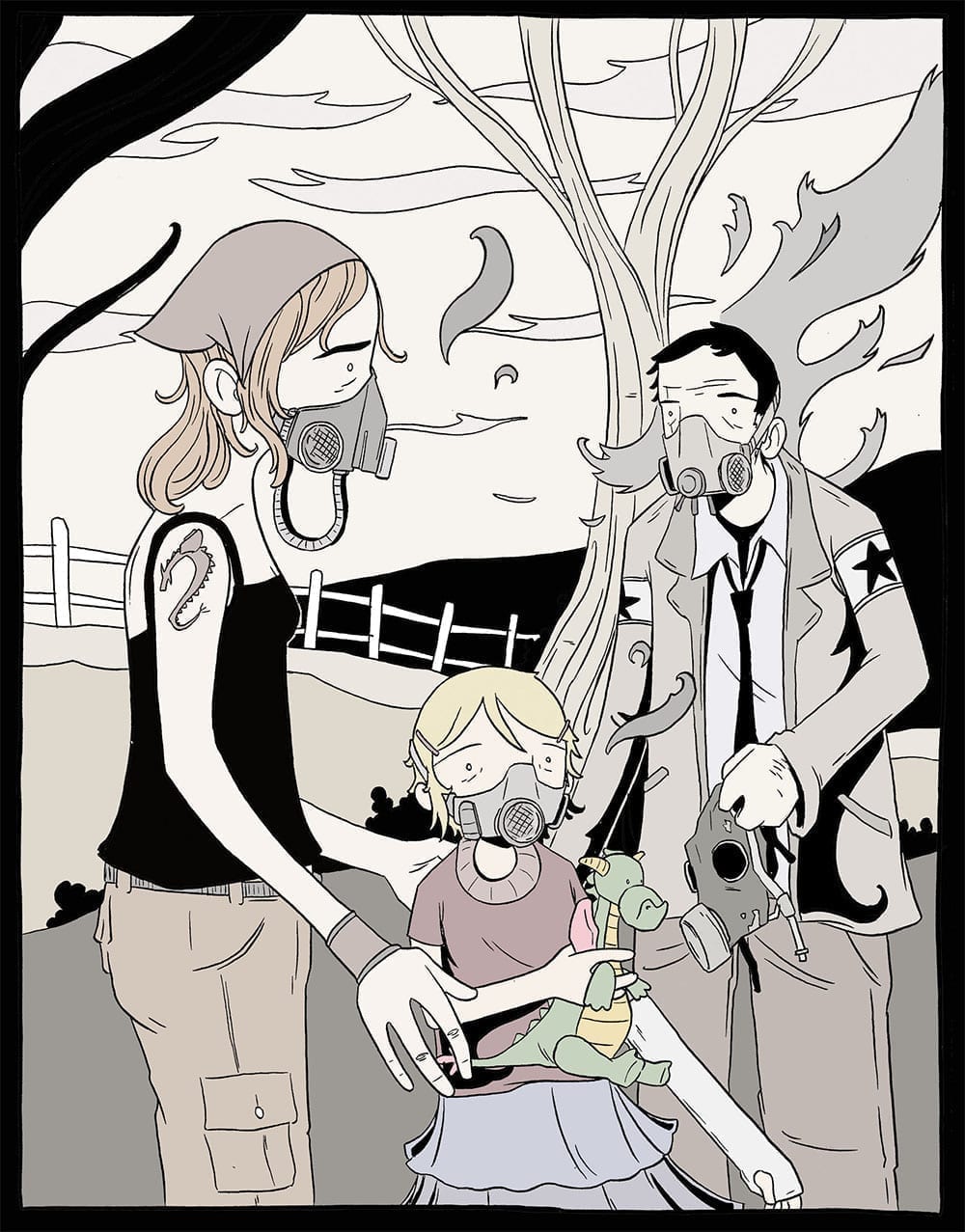 For more reviews like this one, follow us on Twitter. And for all the best comics discussion and interviews, keep an eye on Monkeys Fighting Robots.

BREATHERS, Justin Madson's tale of a world without fresh air, is prescient but not preachy, full but not flashy, a must for indie comic fans.[Review] Justin Madson's BREATHERS is an Indie Masterpiece