Review: JUSTICE LEAGUE #22 Goes Back to the First Crisis

Previously in Justice League, old man Superman was the World Forger in disguise, who revealed to the League the only way to create the utopian multiverse – which comes at a significant cost. Surprisingly, the team found themselves divided on the matter.

In Justice League #22, the prime Multiverse continues to descend into chaos, courtesy of Mr. Mxyzptlk. As the Legion of Doom swoops in to save the day, the story takes a brief tangent through the origin of Perpetua, her children, and the Multiverse. 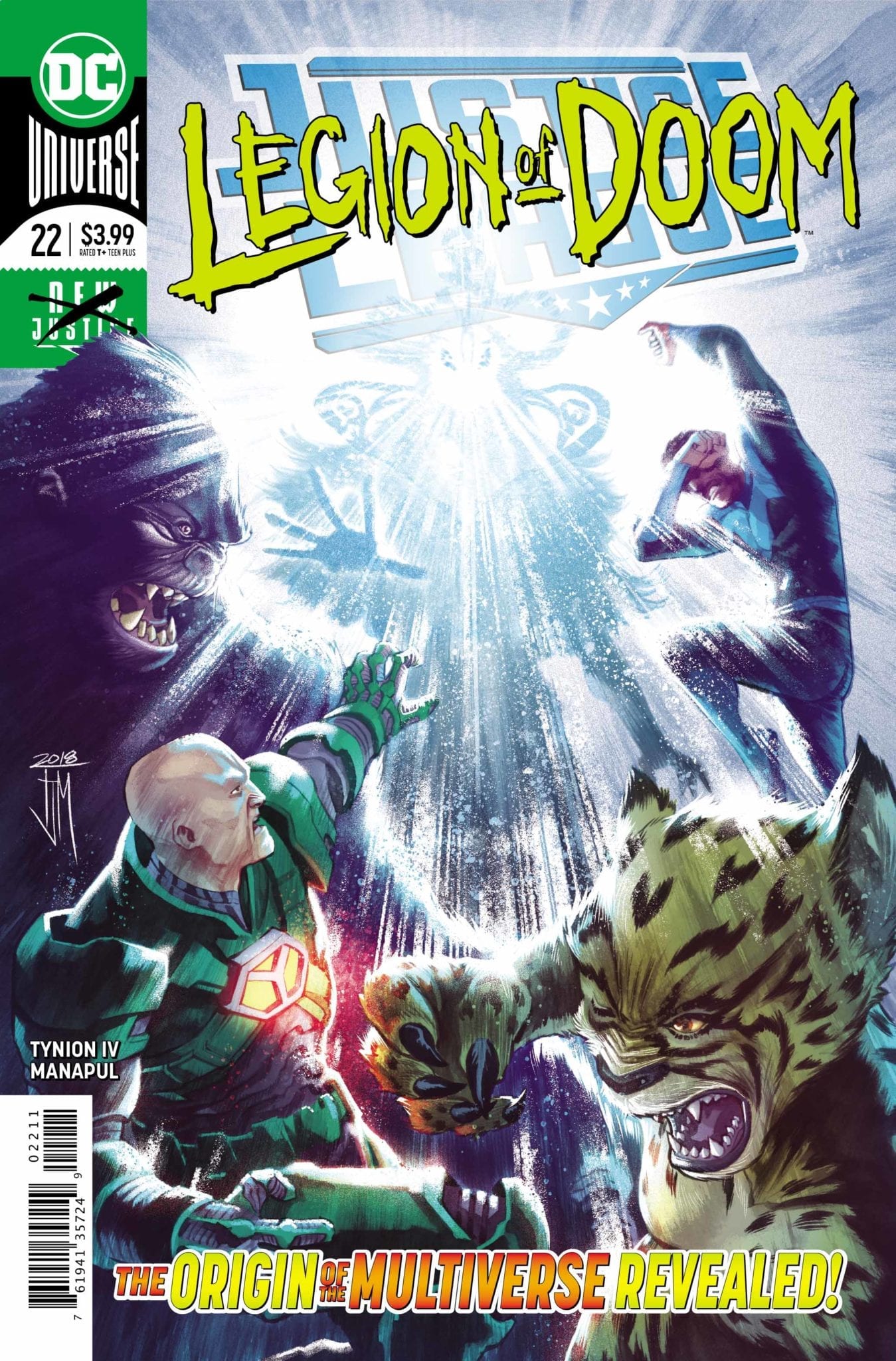 The Multiverse is teetering on the brink, and Lex Luthor’s Legion of Doom is poised for victory. But as the combined intellects of Brainiac and the world’s smartest man make their move toward conquering the keys to the sixth dimension, a much bigger power grows on the horizon. At last, the final form of Perpetua takes her shape, and the DCU will never be the same again!

James Tynion IV takes over writing for Scott Snyder in Justice League #22, and veers away from “Sixth Dimension” main narrative. Instead, he takes readers back 20 billion years to the creation of everything.

One of the reasons the previous few issues of JL are so beloved is that, despite its incalculable scope, it is still a human story full of heart and humor. The members of the League are in awe as they discover this idyllic possibility of a future, and find themselves divided as they debate the ramifications if they pursue it.

With Justice League #22, Tynion pens a fable that, while missing the heart of the last three issues, is still a worthy entry in this series. It is a bit jarring to have the story make a sudden stop and jettison backward, but Tynion makes up for it by scribing an intriguing creation myth for the DC Multiverse. He also reveals how Perpetua was imprisoned in the Source Wall to begin with, and why Earth is such an important piece of the Multiverse.

The standout story-line in this issue of Justice League is in its first few pages, with Mera, Starman and Jarro attempting to tame the out-of-control Mr. Mxyzptlk. The Legion of Doom arrives just in the nick of time with an inter-dimensional secret weapon – Bat-Mite. The reality warping altercation between these two will hopefully make for fun story and artwork in the coming issues. 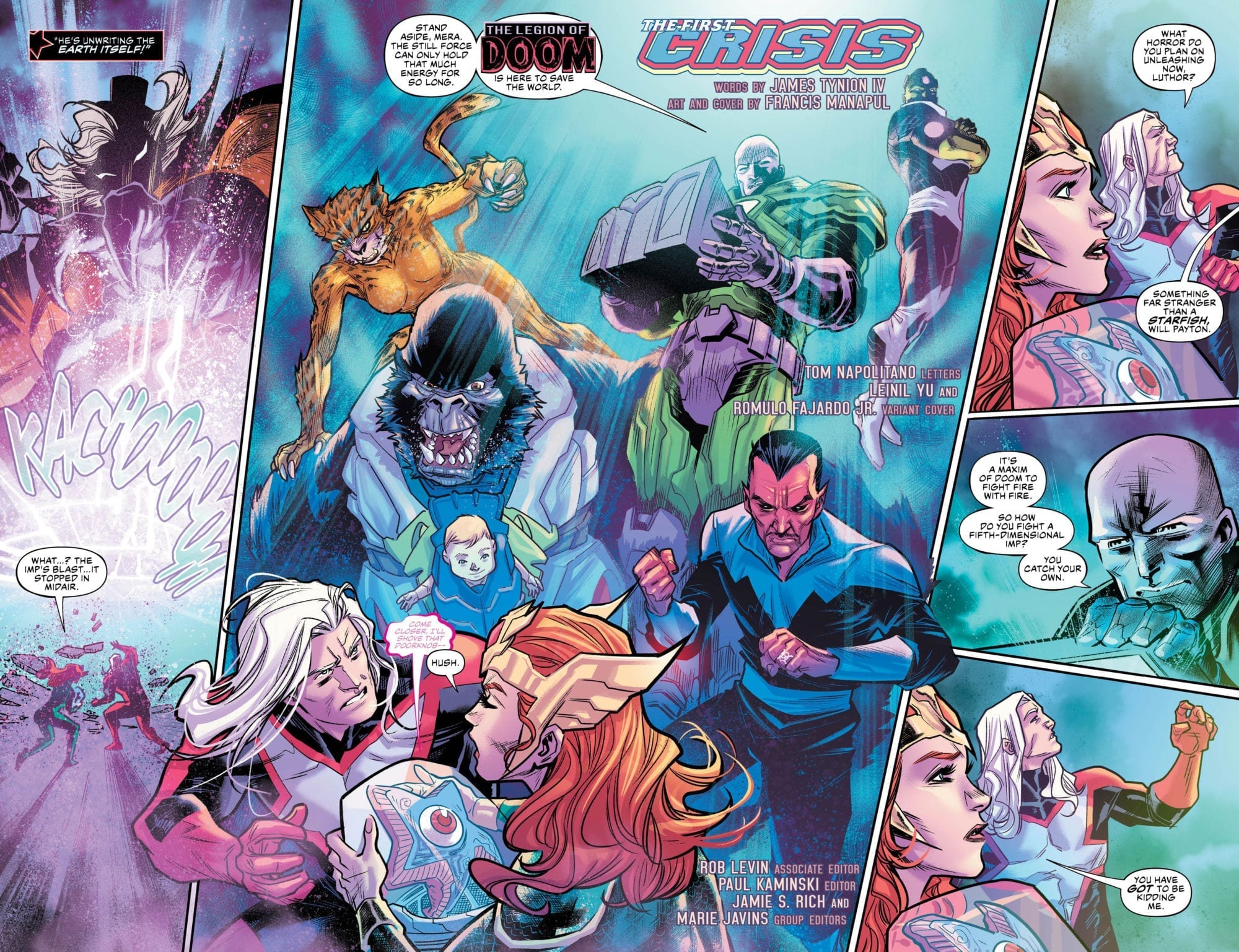 Francis Manapul’s art is as epic as the story. If anything, readers should pick up the book to take a look at the artwork. His line-work is bold and rigid, crafting statuesque characters. These cosmic gods are intimidating, yet wondrous. Much like Jorge Jimenez, Manapul easily conveys Justice League‘s scope and magnitude.

Manapul’s use of color is much less vivid than Jimenez’s work in the previous issues of Justice League. His use of a hazy, cloudy overlay in each panel makes his work otherworldly, and dreamlike.

Justice League #22 is pure exposition, as if this story really needed any more. It’s a worthwhile read with interesting dollops of world-building. However, the series works better when it is moving forward, and sticks with its main characters.

What did you think of Justice League #22? Let us know in the comments!

If you were looking for more exposition in this series which is overflowing with world-building and mythology, Justice League #22 is for you. Review: JUSTICE LEAGUE #22 Goes Back to the First Crisis