Hexagon #1 is the start of a new series by publisher Impact Theory. After something like Neon Future however, Impact is going to need something big. Don Diablo‘s Hexagon does just that by playing with trends. Taking place in the 80s, the series uses tropes like those from Stranger Things and Paper Girls. From arcade machines to kids on bikes, there are plenty of nostalgic moments. However, Hexagon takes steps to stand out from its contemporaries.

Protagonist Don Van Vliet just wants to join his friends in playing a popular arcade game, Crucible. His dad, however, won’t let him. Most gamers are familiar with the public debate of video games in the 80s, especially in how they might affect children’s minds. Surprisingly though, Mr. Van Vliet is a Yoda imitator and builds Gundam models. Nerd culture was kind of looked down upon in this time, so to see an adult okay with fandoms but not with arcade games is kind of interesting. Prior to meeting Mr. Van Vliet, however, readers see a player experience a devastating loss at Crucible. By the end of Hexagon #1, that opening scene serves as foreshadowing for the series’ plot.

Don is a good kid who wants to make the best of both worlds with his dad and friends. He and his dad also come very close to that intersection in some pages. Mr. Van Vliet wants him and Don to bond over a different hobby, but Don only does it to please his dad. While Don loves his dad, that doesn’t mean he has to put up his dad’s excuses. It’s an expertly crafted dynamic by writer Michael Moreci. So it’s only natural that Don decides to sneak out to play and impress his crush. Don even seems to get what he wants when he wins Crucible on his first try. But all forms of wish fulfillment come with a price near the end of the issue when news of Don’s achievement reaches far, far way. It’s a carefully crafted narrative by producers Tom Bilyeu, Don Diablo, and Moreci that hits just the right beats for readers, thanks largely to the worldbuilding we get throughout the first issue.

With so many artists putting their energy into this comic, it’s hard not to feel their passions. The penciling by Jheremy Raapack puts forward some simple but very effective designs. For example, the ship designs reflect how they would look in a 16-bit game, whereas the human characters have simple designs that allow for a variety of expressive faces, allowing readers to feel the effect Crucible has on the gamers’ minds. The inks meanwhile keep the reader focused by making the main subjects’ outlines bold. Everything else has softer lines. That doesn’t mean that these background elements don’t serve a higher purpose, like Don’s Star Wars memorabilia. It tells you everything you need to know about the characters and setting along with the main story.

Assisting in those areas are the coloring by art director Abraham Lee as well as David Kim, Nuo Xu, and Marc Conroy. In the fantasy sequences, everything looks bright and vibrant, standing out against the setting. The real world meanwhile is just a colorful but there are more times when everything blends into the background. Even the characters with softer lines but contrasting colors serve the purpose of raising the conflicts. But perhaps the biggest contributions come from the illumination effects. Each ray of light that touches someone is a sign of what serves the overall plot. Whether it’s reflecting against a character’s hair or just shining a lamp, light acts as someone’s guide. 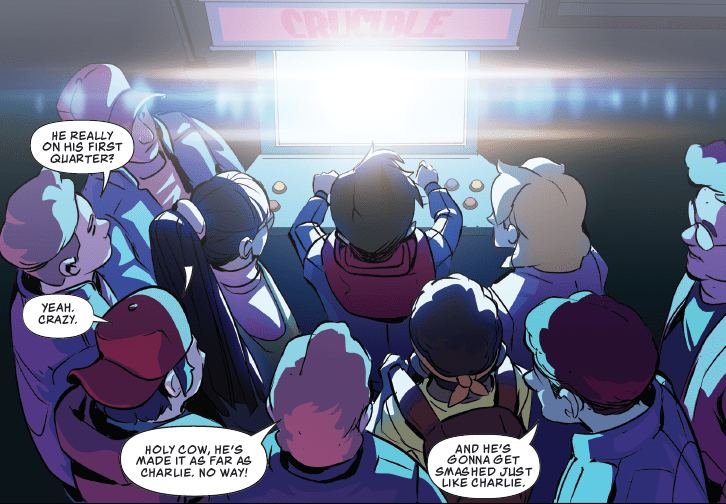 The letterers (composed of “A Larger World Studios”, Farhad Heydarian, and Lee) probably have the most underrated job in Hexagon #1. Anyone worth their salt arranges word bubbles and captions in a way that doesn’t disorient readers. However, the arcade machines don’t seem to have the fonts that would typically appear on their screens. No pixels or tech fonts; it kind of breaks the immersion. A number of onomatopoeias however perfectly fit their effects. The most mesmerizing one comes from the boss character in the game as the onomatopoeia materializes with it. 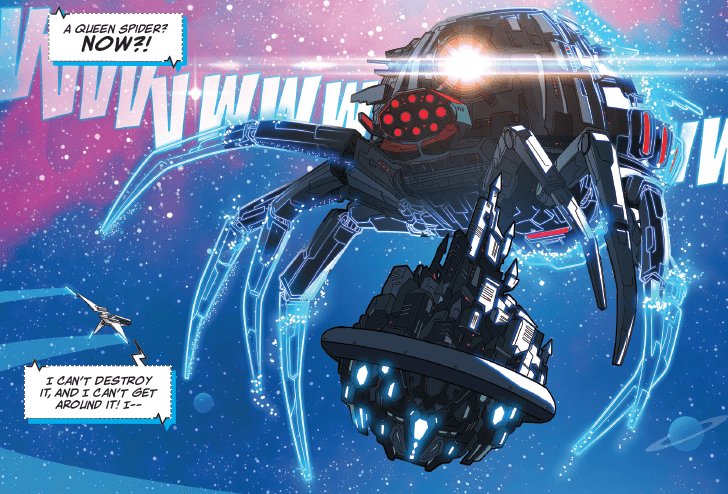 I don’t know how many musicians can collaborate with such skilled creatives for work that can give people so many sensations. But Don Diablo and his crew have done just that. So get ready for a series that will make your 80s nostalgia sense explode, because there’s a whole lot more coming. What do you all think? Leave your thoughts in the comments.

Review: HEXAGON #1 - 80s Nostalgia For A New CrowdPut aside Stranger Things for a bit and reexamine the emotional beginning of the 80s in this sci-fi tribute.