Working in an office is a hell that most people can relate to. The 9 to 5 hours feel like an eternity. The cubicle feels like a coffin. The boss is a micromanaging demon. That’s exactly what cartoonist Jeff Martin is poking fun at in Hell, Inc., the weekly webcomic currently fundraising its way to print via Kickstarter.

Hell, Inc. is an office comedy set in Hell – think The Office meets Dante’s Inferno. It is the story of Doug, a lowly office drone desperately trying to wring any bit of happiness he can out of his soul-crushing existence.

Though Martin compares Hell, Inc. to a show like The Office, it reads much more like the Dilbert comic strip by Scott Adams. Both are satires about office politics, relationships, and overall calamity. Both comics deal with a Kafkaesque bureaucratic office, and the hapless desk jockey at the center of it all. But where Dilbert’s comedy is often highbrow, Hell, Inc. digs low to the Ninth Circle, complete with corny puns (“What the here?”) and cartoon humor.

Martin writes Doug as a wholly ordinary demon trapped in both a proverbial and literal hell of heightened situations and supporting characters. We’ve seen this kind of humor time and time before in workplace comedies (see: Superstore, Office Space). However, it’s these all too relatable jokes and situations, coupled with the overabundance of hellish puns and references, which makes the book all the more enjoyable to digest. 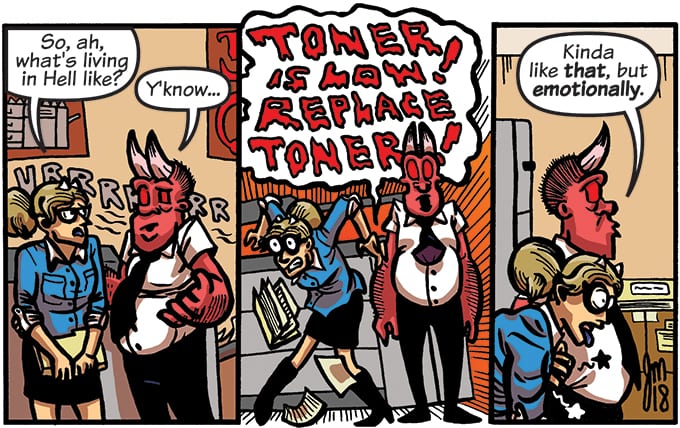 The artwork of Hell, Inc. has a surreal quality to it, which just adds more flavor to the elevated writing. Martin overstuffs each panel, leaving little breathing room, conveying the claustrophobic qualities of an office environment. The character work is fairly tame, albeit cartoony. It’s substances like blood, acid, fire, and ink toner that are bombastic, and bleed through from panel to panel.

You can pick up a print copy of Hell, Inc. by supporting it on Kickstarter. You can also read the webcomic from the very beginning right here. Jeff Martin also has a Patreon page with early and exclusive content. And be sure to follow Martin and Heat Comics on Facebook, Twitter and Instagram for updates on Hell, Inc. and his other projects.

Is your office like Hell, Inc.? Let us know why in the comments.

1649
Find out how to get the
Monkeys Fighting Robots magazine!

An Origin in STRANGER THINGS AND DUNGEONS & DRAGONS #1

Stranger Things and Dungeons & Dragons #1 is the beginning of a new adventure, as four boys discover the wonder of tabletop RPGs.
Read more
Comic Book Reviews

How He Flies Solo in STRANGER THINGS: SCIENCE CAMP #2

Stranger Things: Science Camp #2 tells a different story of what happened that one time at science camp, with a few horror twists thrown into the mix.
Read more
Comic Book Reviews

Review: BATMAN #101 Prepares For The Future in a Dull Way

Batman Picks Up The Pieces... The Joker War is over, and all that’s left is the ashes. While Batman faced Joker, armed with a high...
Read more