In Step By Bloody Step #3, we follow our protagonists into a city. Until now, this series has seen our characters through a harsh wilderness, as they trek onward to some unknown goal. This chapter shows a stark contrast, not only to the issues that came before, but to life outside the city walls. Writer Si Spurrier, artist Matias Bergara, and colorist Matheus Lopes lure us into a haven that’s surrounded by a battlefield.

Spurrier has been setting up the themes that are at play in this issue for a while. All through the series, whenever the young girl wants to stop and enjoy herself, the armored giant insists they keep going. Step By Bloody Step #3 sees the girl finally win out in this argument. She ignores her giant companion’s silent warnings and enters a party in the city. Spurrier quickly makes it clear that there’s something off about this celebration. Whenever we’re not seeing the lavishly dressed guests talking over their glasses of fine liquor, we’re seeing the poor, war-torn landscape outside. Spurrier clues us in that this city is one that has been built through conquest. And its residents have deliberately insulated themselves from the joyless realities of life beyond their wealth. 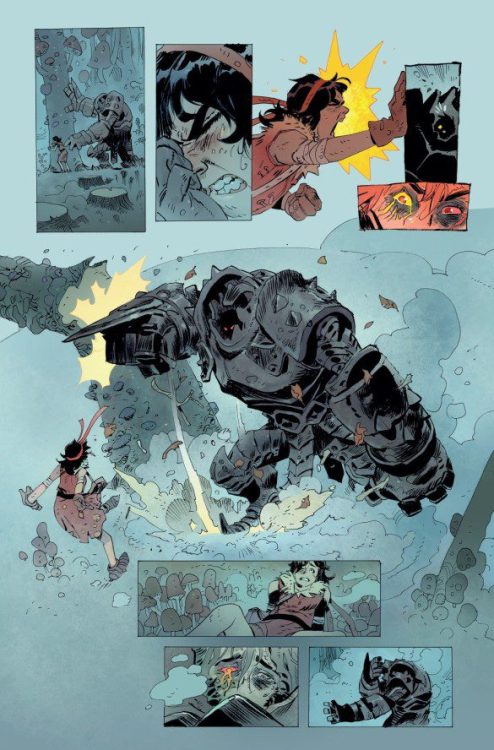 Bergara and Lopes work beautifully in tandem to bring this contrast to life. But they also play with some of the similarities between the evil “city people” and the little girl’s life thus far. Right before they’re met by an ambassador for the city, the girl and her armored giant protector get into a fight. The giant seems to lose its temper, stomping on the ground and creating large clouds of dust behind it. The next page shows the ambassador flying into the scene on the back of a large bird. Bergara and Lopes present these moments as mirror images of each other. The giant’s tantrum and the bird take up the same space and placement on each page, and the pages are both colored in greys, whites and muted blues. The little girl looks at her protector with an unconvinced eye from then on. It’s as though she’s saying “You’re trying to shield me from these people, but what makes you better than them?”

When the girl meets the city leader, the page bursts with color. In the center of the page, Bergara places a platter covered in delicious foods, colored vibrantly by Lopes. The food is in the foreground and we see the girl in the background looking at it. She looks small and pale compared to it. The temptation is just too big for her. From then on, we see scenes that take place in the city or just outside of it. The most effective moments occur when we see a little of both at the same time. The little girl walks through a luxurious garden, painted in stunning greens, set against the backdrop of violent skirmishes outside that show up in deep browns and twisting greys. Bergara and Lopes will not only show you the differences between the city dwellers and the poor who fight outside, but they’ll make you understand why someone could get lost in the vibrant riches of the city and forget that anything else ever existed. 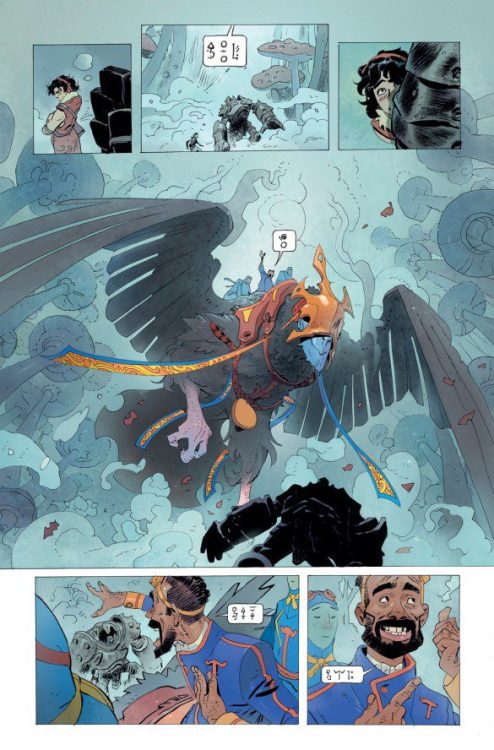 Step By Bloody Step is a gorgeous series. It patiently teases out themes and ideas over the course of several issues at a time. It’s drenched in subtlety yet it’s also full of action and dynamism. Pick up Step By Bloody Step #3, out from Image Comics now, at a comic shop near you!

STEP BY BLOODY STEP is a gorgeous series. It patiently teases out themes and ideas over the course of several issues at a time. It's drenched in subtlety yet it's also full action and dynamism.Review: Glamour and Gore in STEP BY BLOODY STEP #3