N.K. Jemisin and Jamal Campbell’s “Far Sector” has improved upon every facet from its first issue by taking more intimate time with its wide cast of characters and delivering considerably more breathtaking artistic scenes. The mystery and world-building at the series’ core is given life through its characters, and it will make the wait for the next issue all the more stressful.

After watching her first murder suspect (and the first murder suspect on The City Enduring in 500 years) get killed in the interrogation room, new Green Lantern Sojourner Mullein has to dig even deeper to find the history and conflicts of this planet’s people. As it turns out, the three civilizations living together in emotionless harmony each have more complex and clandestine pasts than Mullein could have imagined. Now, she’ll have to be wary of drug abusing aliens, possibly being eaten, and apparently even romantic advances if she’s going to solve this planet-scale murder case. 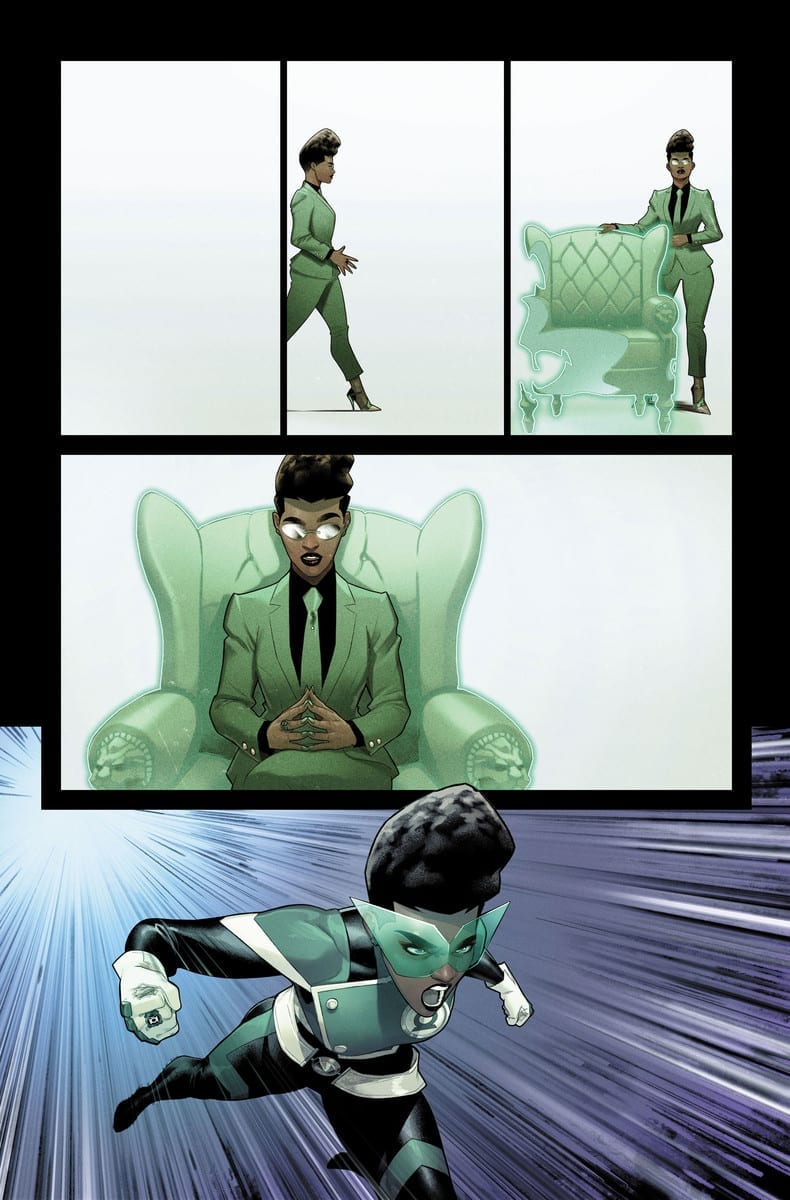 Acclaimed novelist N.K. Jemisin really comes into her own as a comic writer on this second issue of “Far Sector.” While the first issue spent a lot of time dumping exposition via narration to acquaint the reader with this new world, this follow-up exposes the plot’s complexities through meaningful and intimate character interactions. The characters are all so interesting to read here. There are three distinct interactions with different supporting characters that each have their own different tones and they are all so compelling to read. Mullein herself as a character is strengthened through these interactions, as well as made more multi-dimensional through her newly explored flaws. At this rate, she could easily make for one of the best new additions in DC’s roster. The chunks of expository narration are replaced by internal reflection from Mullein, as well as more of the comic-specific style of letting the art do the talking. The pacing from the opening chase sequence to the conversational scenes is fantastic and never feels slow. The dialogue itself is naturalistic and varied among the cast. Overall Jemisin knocks it out of the park on this issue, and it’ll be interesting to see if she can maintain this style in her scripts. 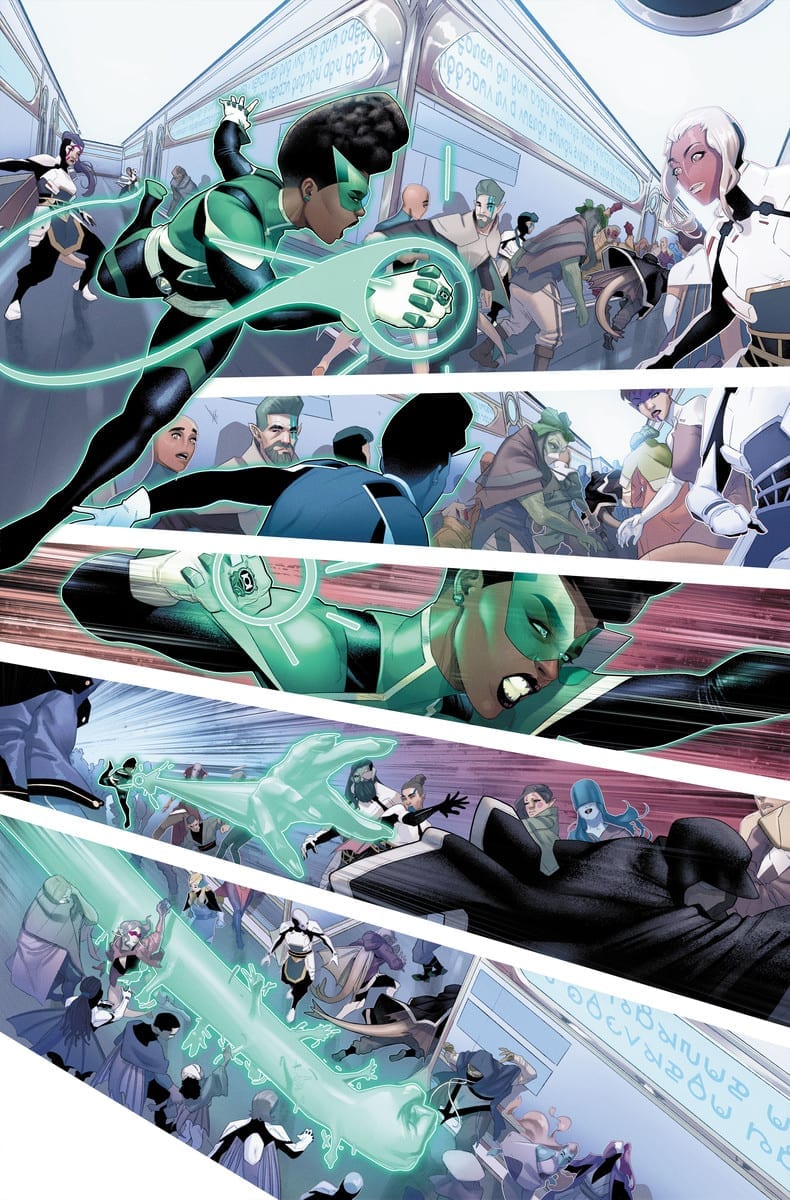 As impressive as Jamal Campbell‘s art was in “Far Sector” #1, it appears that he’s been given considerably more to work with in this second issue. As amazing as his alien city-scapes and sci-fi character renderings are, he really gets to shine through the quieter moments of conversation this issue has. The one thing about his art that was wanting in the previous issue was the characters’ lack of individual expression. This problem is completely removed here. The incredible moments of interaction inter-cut with massive Bladerunner style metropolitan views and quick action make for some of the most wildly impressive art in comics this year. His massive range of digital neon colors breathes a sea of life into the panels, and gives a feast for the eyes on every turn of the page. Absolutely stunning work from one of the best recent artists to enter the industry. 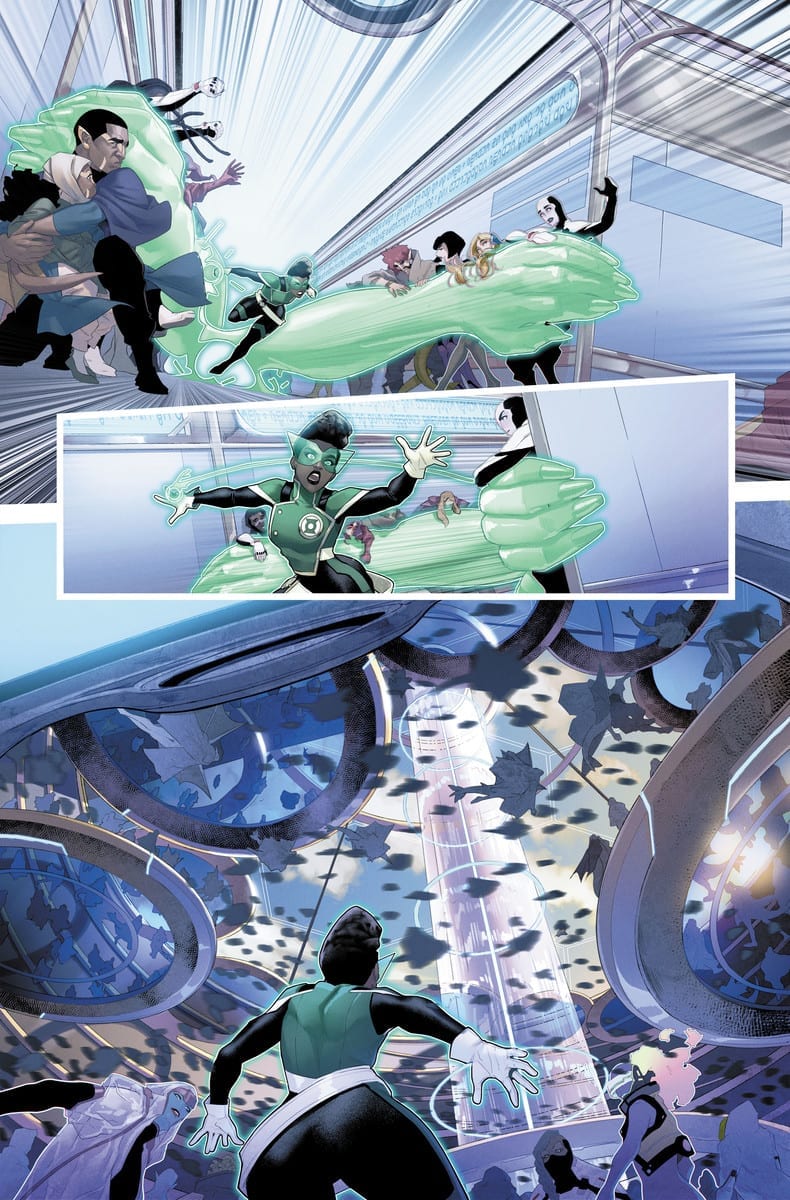 “Far Sector” #2 is as excellent a follow-up issue as any comic could hope to have. It properly improves upon every creative element of the previous issue while also improving on the storytelling itself. N.K. Jemisin’s script fleshes out characters in intimate moments of conversation that also reveal more about the plot itself. Jamal Campbell’s artwork is given even more of a chance to shine with his stellar work on the quieter moments between the characters. Regardless of what your opinions may have been about the first issue, this follow-up showcases the possibilities of this new series. Be sure to pick it up at your local comic shop on 12/11.

Review: FAR SECTOR #2 Brings Drugs, Murder and Alien LoveA stellar follow-up issue that ups the intrigue and settles into its own story.