The Hellboy universe is driven by such consistent quality that the unusually “meh” debut issue of “Witchfinder: Reign of Darkness” was seen as an anomaly. Unfortunately, not much has improved here in the second issue. “Reign of Darkness” #2 is a directionless chapter. The “mystery” is explained in blobs of dialogue, and the pacing is distractingly cluttered. The character art is once again strangely off-putting. The momentum that was built on the final pages of issue #1 goes to waste in this follow-up.

Sir Edward Grey (a.k.a. The Witchfinder) continues his tumultuous investigation into the identity of Jack the Ripper. As soon as his most likely suspect is just out of reach, he receives an unlikely suggestion from an outside source. An American woman by the name of Sarah Jewell believes she knows the true culprit. Grey will have to withstand criticism from the law, the covering of the truth, and even desperate brigands to track down this monstrous villain. 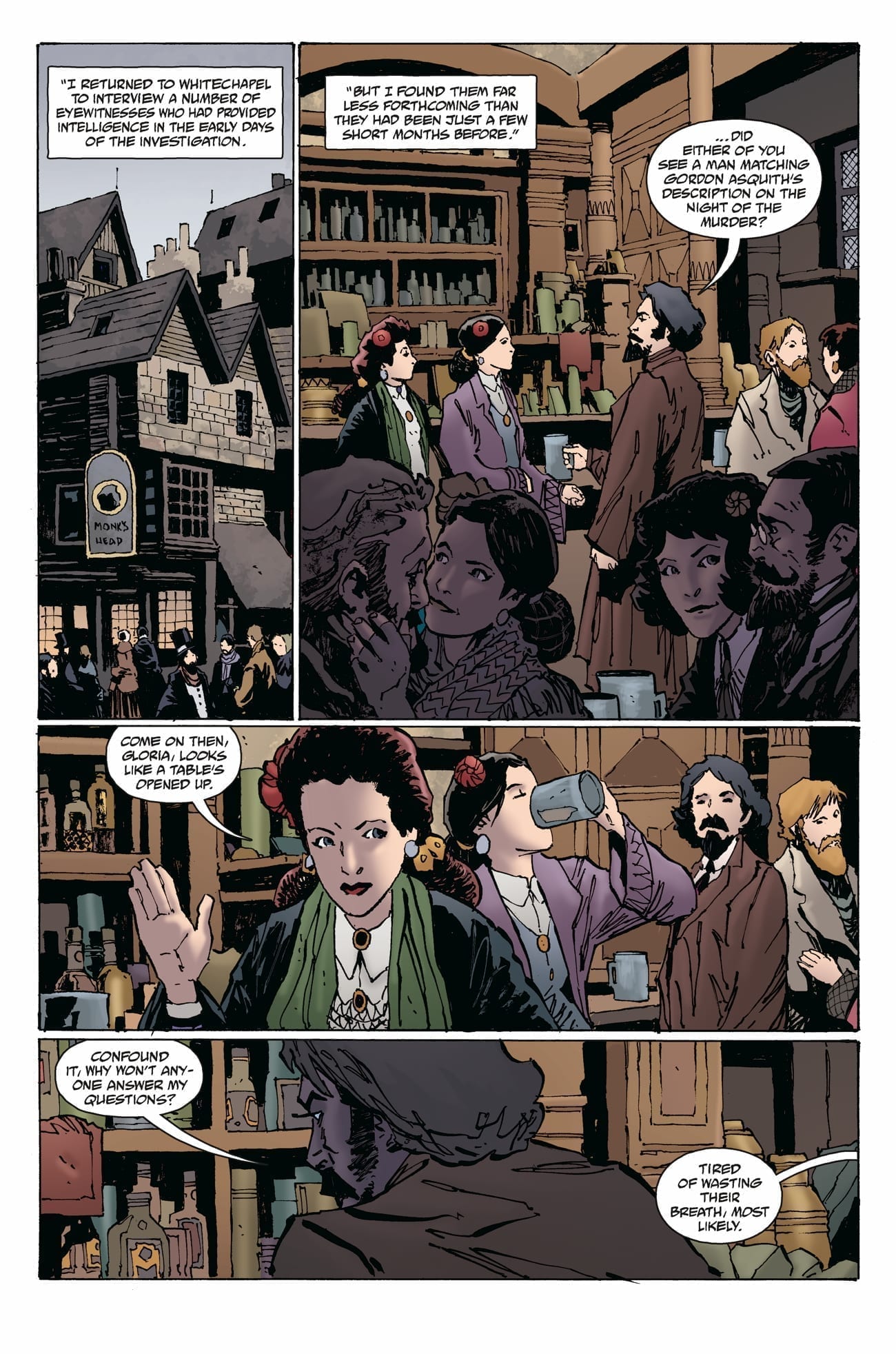 One of the most effective aspects of Mignola’s work and the Hellboy universe as a whole is the use of art to tell a story. Dialogue and narrative are obviously key, but letting the panels talk bolsters the atmosphere. Moments of introspection and suspense are created in these quiet moments. Unfortunately, this book offers none of those strengths. While some solid dialogue is to be had, the writing here is bloated with needless exposition. Any and all “investigation” is given away by characters just reciting facts or speculation. There is no investigating to be had. While the dialogue exchanges are well-written from a language standpoint, they too are often a bloated bore to read.

The appearance of a key Hellboy universe character (no spoilers) is a treat, but it isn’t enough to offset the strange pacing this comic has. It doesn’t feel like a steady flow of events leading to a climactic conclusion. It just feels like a series of scattered related occurrences. The first issue had similar problems, but it at least had a definite direction and a promising final page. This issue neither capitalizes on the prior nor builds toward the next in any exciting way. There’s a fight scene that occurs roughly midway through the issue that feels very much out of place. The scene itself is cool in that is demonstrates some of Grey’s paranormal knowledge, but it doesn’t do anything for the plot. Hopefully this actually proves to be more important in forthcoming issues. With two issues down in this five-issue mini-series, it’s more than a little worrying that the writing feels so cobbled together. 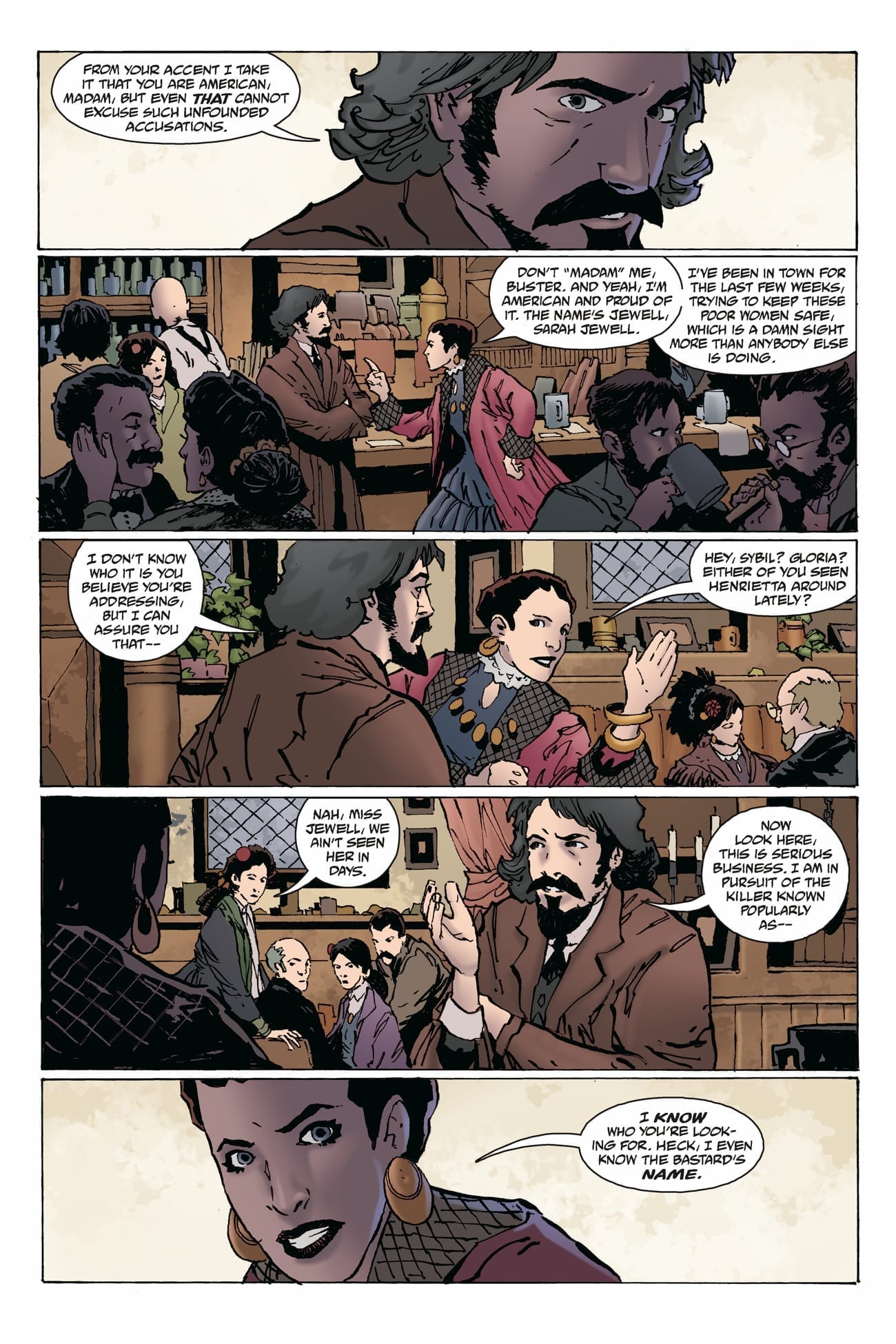 The pencils and inks on this Witchfinder series thus far have been a mixed bag. The environmental details of 19th century London are well-executed and properly atmospheric. The brick buildings and dingy crime scenes in “Reign of Darkness” make for a stellar setting for a paranormal Jack The Ripper tale. If only the character art could match the quality of the setting. Once again, the work on the characters themselves looks as if it’s unfinished. There’s still this partially-rendered look to their facial features and clothing. It’s reminiscent of when a game engine is still loading all the textures, so the character faces are blurry and featureless. It’s a shame that this still isn’t working, especially in a series that’s part of a universe full of wonderfully unsettling horror artwork.

The colors are mostly a bit of a saving grace. The grayed palette is reminiscent of foggy industrial England and adds considerably to the authenticity of the era being replicated. However, they also come in a little underwhelming on close-up detail work. The entirety of a piece of clothing, for example, will sometimes be colored in a single shade regardless of the lighting from the environment. This may sound like an absurd nitpick, but when in tandem with the pencils and inks, it becomes a noticeable distraction. 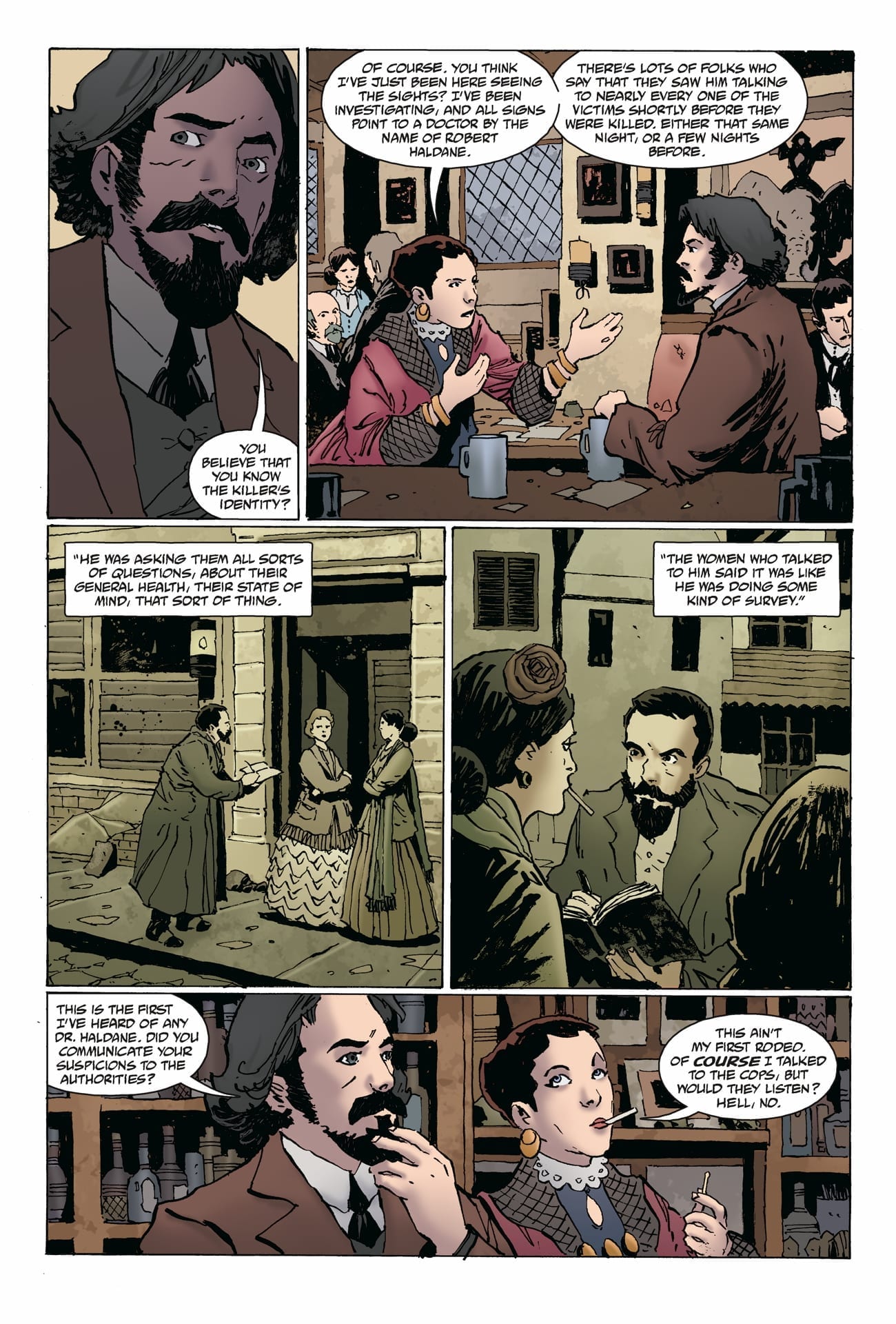 “Witchfinder: Reign of Darkness” #2 is an even more disappointing follow-up to an already lukewarm debut issue. Blocky exposition and a poorly paced plot overtake any clever dialogue that is there to be had. The art direction looks as if it were unfinished and is mostly distracting in a series that needs to be engrossing. Any elements of mystery and suspense are squashed by loads of explanations in dialogue. With this being the second of only a five-issue mini-series, it’s a bit disconcerting that this comic has failed to impress thus far.

Review: Extreme Malpractice in WITCHFINDER: REIGN OF DARKNESS #2Edward Grey once again finds himself in a lackluster issue with messy pacing and lackluster character art.