Review: The Hellboy Universe Meets Jack the Ripper in WITCHFINDER: REIGN OF DARKNESS #1

Even with the promising concept of taking a supernatural jab at Jack the Ripper in the Hellboy universe, “Witchfinder: Reign of Darkness #1” doesn’t do much to bolster that premise. Even with some sharp dialogue and a witty protagonist to back it up, this debut issue is plagued with a humdrum series of events and bland visuals.

In 1888, renowned occult investigator and adviser to the Queen Sir Edward Grey is put on the case to hunt down the serial murderer plaguing English alleys known as Jack the Ripper. Despite Grey’s intuitions about this killer being tied to occult agendas, British investigators dismiss his claims. What none of them realize however is just how powerful the forces behind these murders are. Hellboy creator Mike Mignola teams with writer Chris Robeson and artist Christopher Mitten to create a new Hellboy Universe story that’s been years in the making. 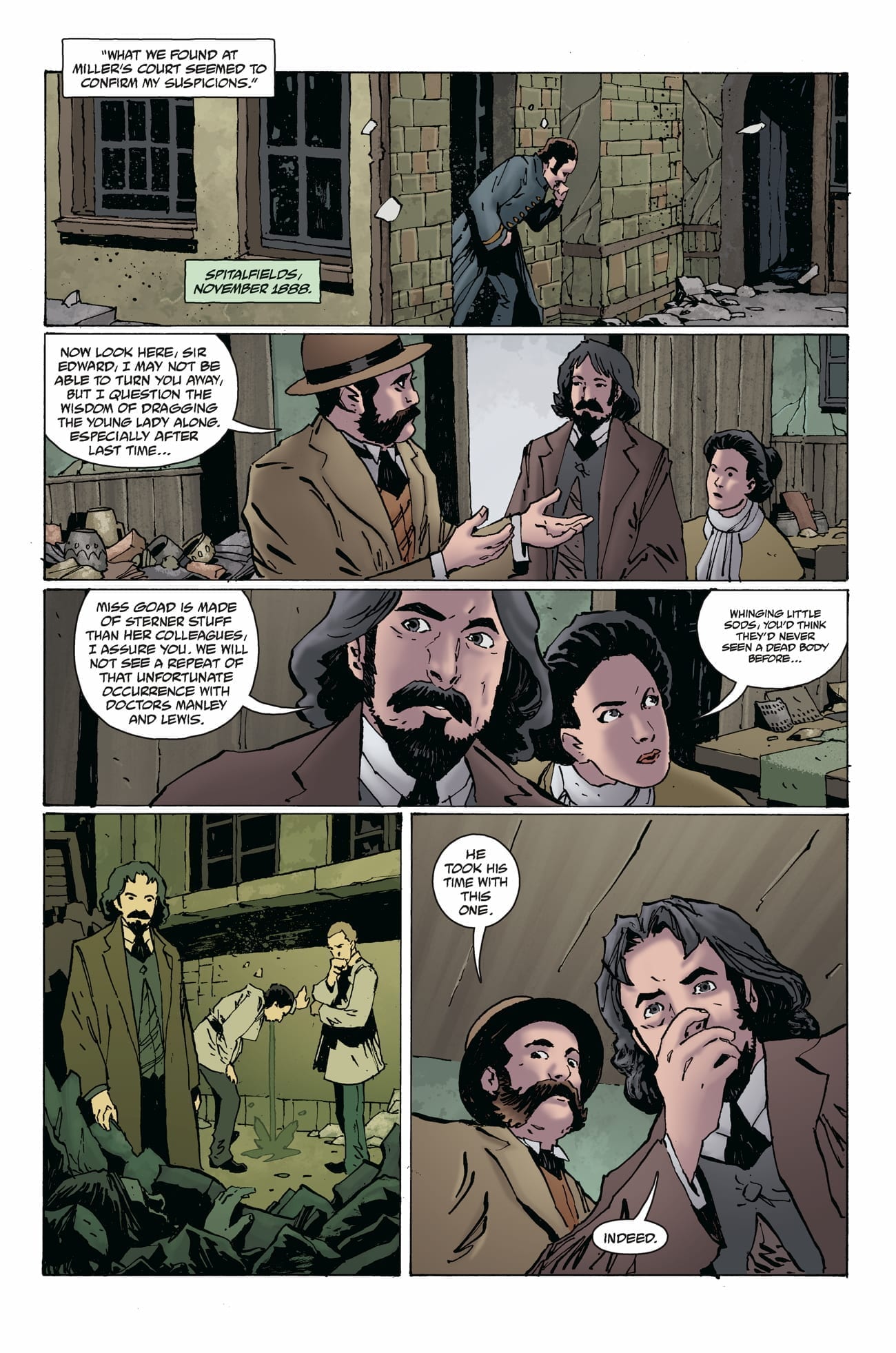 Sir Edward Grey, a.k.a. “the Witchfinder” and his associations were introduced into the Hellboy universe years ago during the “Wild Hunt” story line. Since then, the royal supernatural investigator has been an important supporting character and star of his own solid series. The “From the Pages of Hellboy” stamp is essentially a symbol of assured quality in comics, which is why it’s such a shame that this first issue of “Witchfinder: Reign of Darkness” is so bland. The novel (if not a bit overplayed) pitch of implementing Jack the Ripper in this universe is undersold by this issue’s lack of revelations or intriguing events. This issue follows Grey and his assistant Miss Goad as they follow a series of hunches and discover random MacGuffins to further the investigation. There’s an obvious bit of tension between Grey and the police, as well as a promising ending that will hopefully lead to more exciting and terrifying pastures. The Witchfinder series has been known to be a bit on the slow burn side of comic storytelling. However, this issue doesn’t offer the steady series of discoveries and intrigues to start off a compelling plot. There just isn’t much besides Grey’s likability as a protagonist, snappy naturalistic dialogue, and the premise itself to make the plot very engaging. 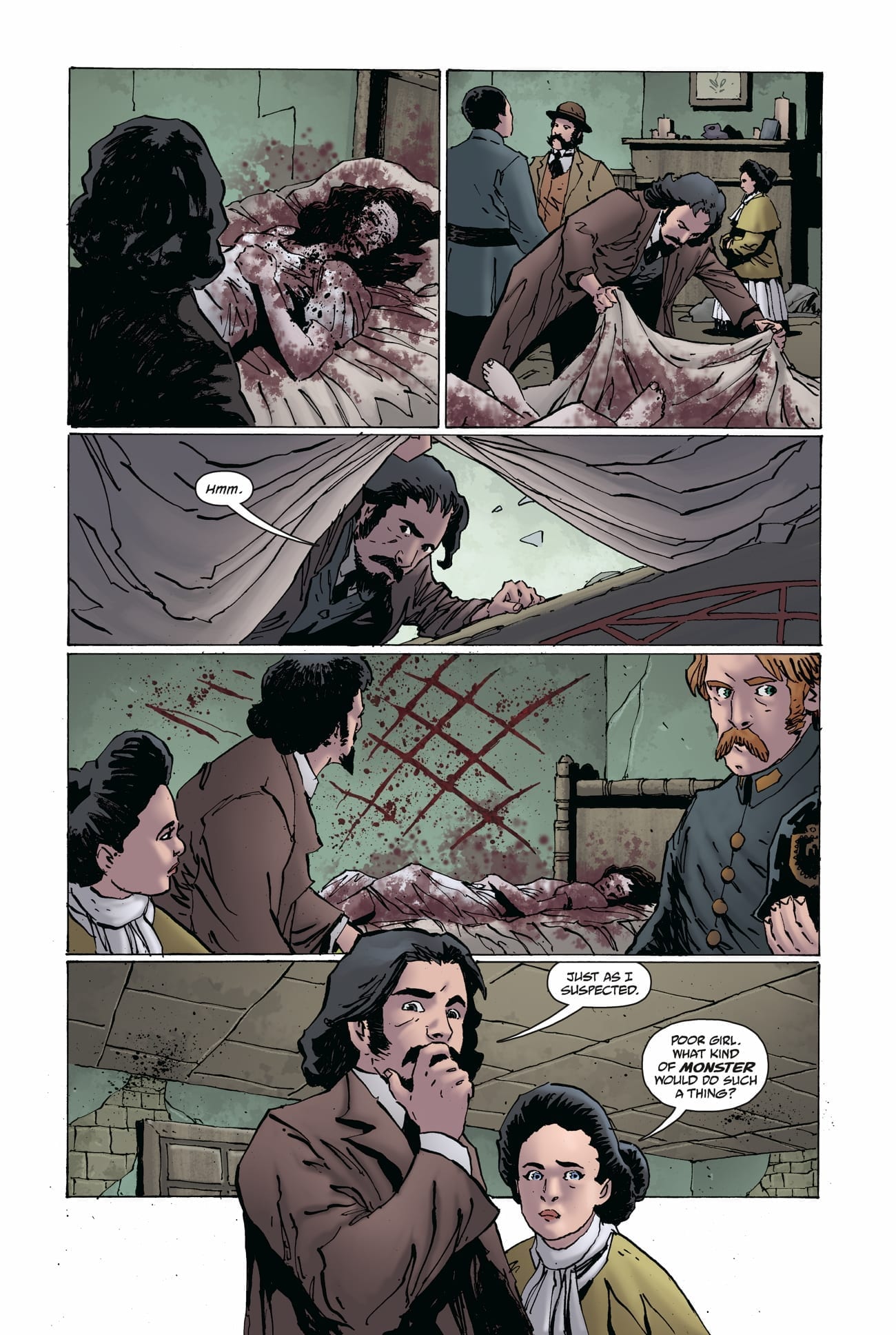 Perhaps the most iconic element of the Hellboy universe is its’ unique Gothic-horror aesthetic. Mignola has always found artists that reflect his own iconic styling, but manage to also have their own individual artistic looks. One such artist is Christopher Mitten, who has worked on various Hellboy and B.P.R.D. stories in the past and done so to great effect. It’s strange then how the art in this issue is so hit-and-miss. The environmental detail is excellent, and it brings late 19th-century London to life in all its hazy Gothic glory. There are specific trademark “Hellboy-ish’ moments (no spoilers) that are enticing and haunting, as they should be. It’s the character art itself that doesn’t fit. The human character look as if they were superimposed over a pre-drawn background. They look like still-rendering digitizations. This is brought about by what almost looks like a lack of inking on the characters themselves. Facial features are penciled well enough to be able to tell who is who, as well as their facial expressions, but the drawings have no dimension. The color-work on the characters as well is strangely flat. Again, the environments and specific supernatural elements look stellar, but the character art itself is off-putting. 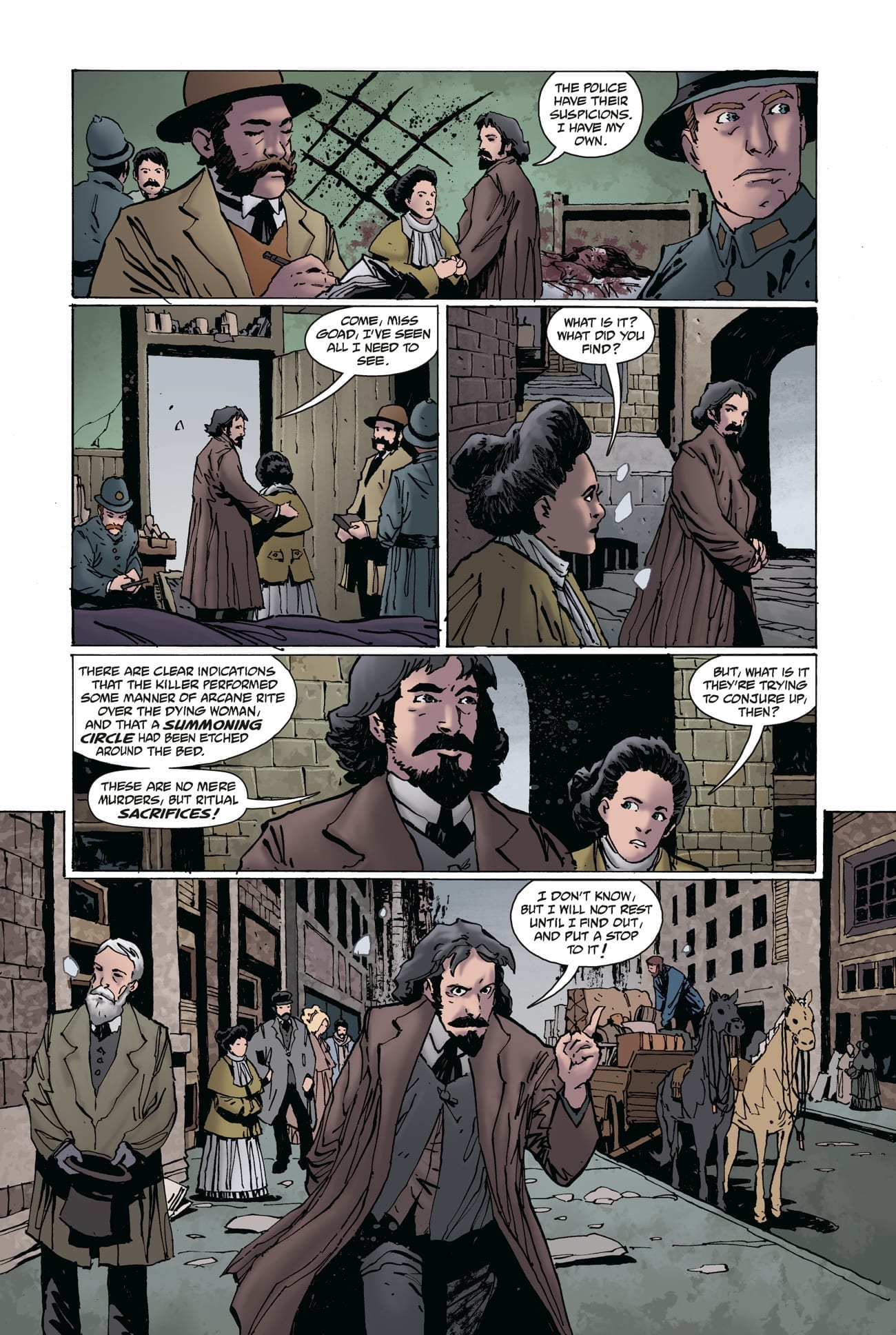 “Witchfinder: Reign of Darkness #1” is a bit of a rocky start for a highly-anticipated new series that details one of the more intriguing anecdotes from Hellboy universe past. The premise is good fun and there is a definite shot at the end that details much more is to come, but the writing and revelations in this first issue aren’t particularly interesting. It’s also plagued by a strange choice of character art that is in stark contrast with the great environmental art and the Hellboy universe as a whole. The final pages of this issue promise that there is much more terror in store for these characters, so here’s hoping the creative team can capitalize on that promise after a lackluster first issue.

Review: The Hellboy Universe Meets Jack the Ripper in WITCHFINDER: REIGN OF DARKNESS #1Despite an intriguing premise and solid dialogue writing, this debut issue of a new Witchfinder series suffers from an unoriginal chain of events and lackluster art.