Over the last several decades of comics continuity, Mr. Freeze’s primary motivation has been to revive his wife Nora, seemingly at any cost. In Detective Comics #1013, out this week from DC Comics, we get a taste of the real, horrific ramifications of that conviction.

Freeze is on the verge of achieving his grand goal. However, Batman is bearing down on him, threatening to interrupt his plans. The result is a somewhat macabre spectacle, leading to a desperate chase to catch the frozen mad scientist. 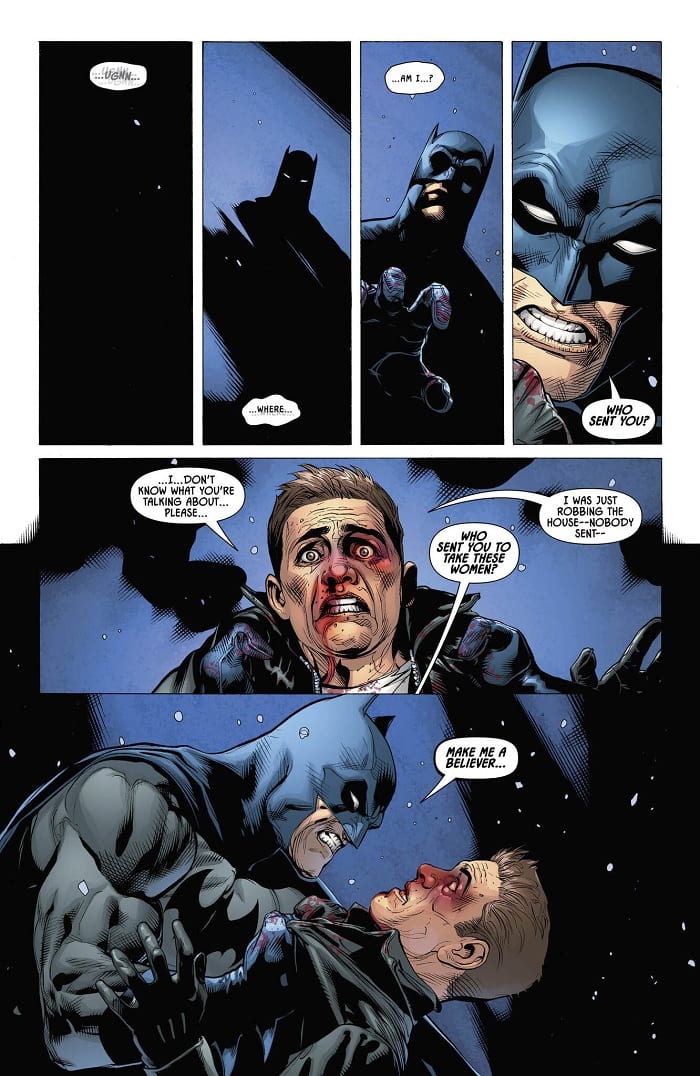 Detective Comics #1013 begins with Bruce and Alfred staging a light farce to coax answers out of one of Freeze’s henchmen. Bruce opts for his classic move of dangling the criminal off a building, while Alfred gets to showcase more of the acting chops he displayed in Detective Comics Annual #2. The tone shifts quickly from comedy to horror, though, when Bruce arrives at Freeze’s hideout.

Without giving away spoilers, suffice to say Freeze recruits some of “failed experiments” in the fight against Batman. Writer Peter J. Tomasi  gives the issue a notably darker, more substantive feel than much of his run so far, but it doesn’t come entirely out of left field, either. He manages to keep the lighter and darker themes balanced throughout the book.

Detective Comics #1013 has some minor inconsistencies. For instance, Batman alludes to a number of mysteries like disappearing people and animals at one point. However, these matters haven’t been fully fleshed out in the story thus far, though, so it’s essentially payoff without the planting. Also, Batman’s inner monologue is introduced halfway through the book, narrating the story in real time, only to drop back out a few pages later. These are just minor quibbles, though. On the whole, the writing ranks among Tomasi’s best issues of Detective Comics thus far.

The story is compelling and well-paced. The strongest point is how the book manages to traverse a wide emotional range without giving the reader tonal whiplash. 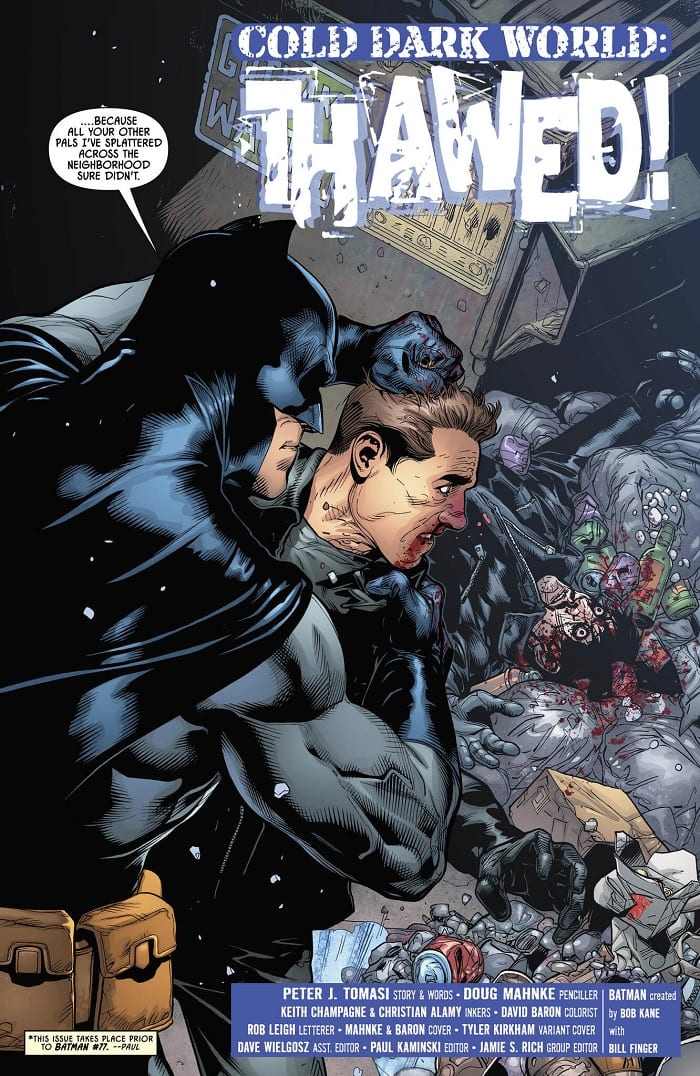 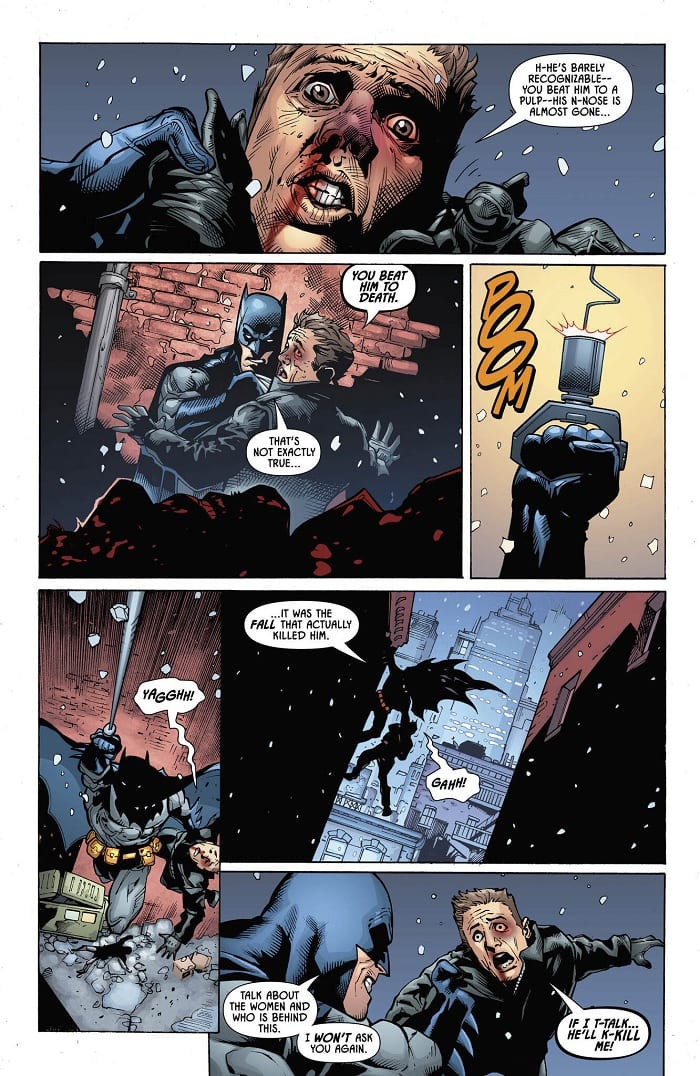 The manner in which artist Doug Mahnke breaks up the action hits the story beats perfectly, matching the narrative pace from panel to panel. He breaks up the action into closely-cropped sequences of panels at points, isolating each line of dialogue to heighten the tension before opening up into a large, impactful image.

The character illustrations in Detective Comics #1013 are highly dynamic. Figures convey a sense of momentum, bringing a great deal of life to the book. Despite what we see in the preview pages, though, little attention paid to background as the book progresses. Through much of it, we see characters speak and act against little more than a bluish void. As a result, the final product feels a bit sketchy and underdeveloped.

While the lack of backgrounds doesn’t give colorist David Baron as much room to play, he manages to provide some eye-catching work regardless. Batman’s sleek, black-and-red cold weather suit contrasts with the icy blues of Freeze’s creatures and the monochrome background, making the colors of the suit pop. The light from Batman’s flamethrower possess an almost unearthly glow. It’s great technical work, with occasional pops of brilliance. 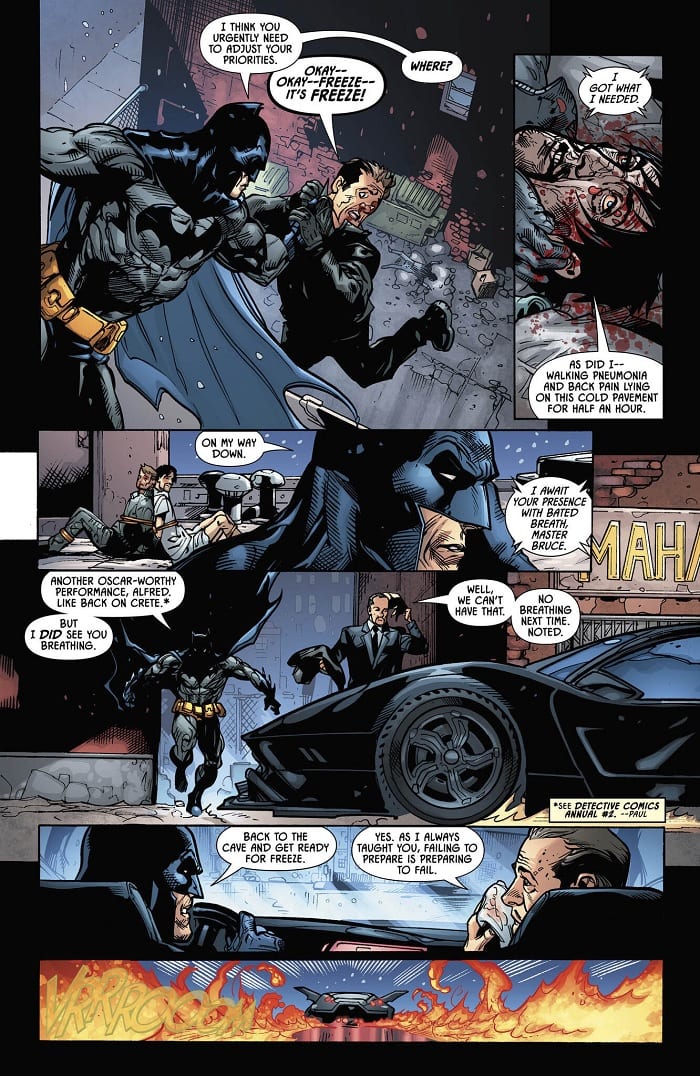 Detective Comics #1013 is one of the more interesting and engaging chapters yet in Tomasi’s run on the series. If you haven’t been following along, it’s worth going back to grab the last few issues to keep up with this story.