The Arkham Knight ramps-up the crusade against Batman in Detective Comics #1002. After a showdown in the park, the Knight manages to get his hands on someone very close to Bruce, attempting to turn a member of the Bat Family against him.

Of course, the big questions are the Arkham Knight’s identity, and why he wants to dispose of Batman. While we don’t get the answers to those questions, there’s plenty of intrigue to be had in Detective Comics #1002. 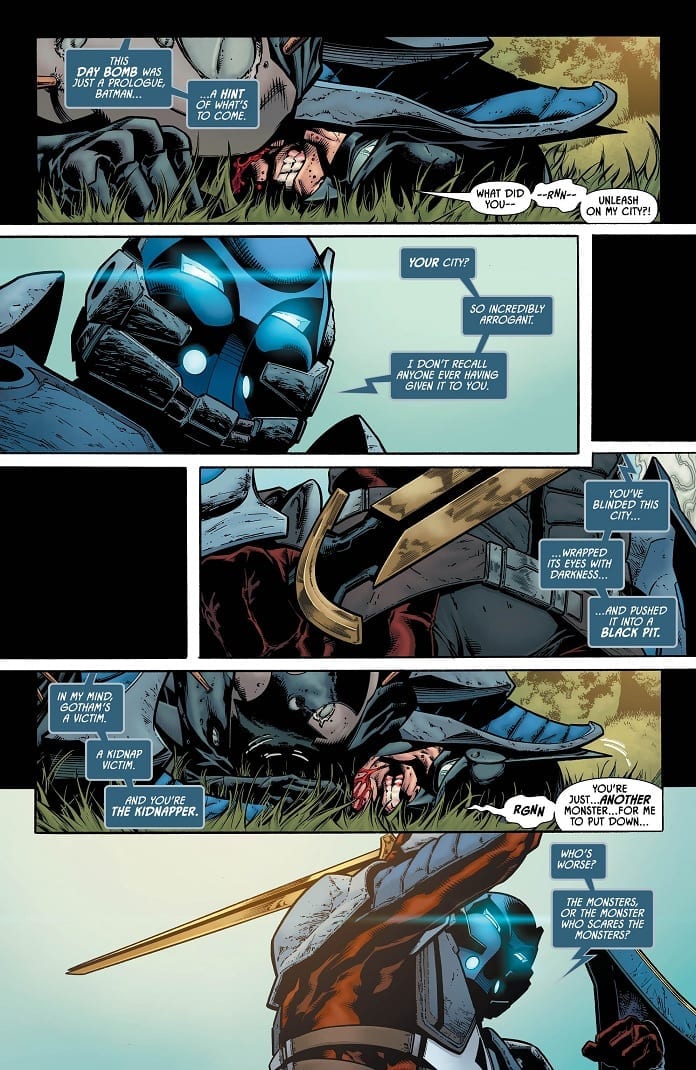 The knights’ arrows are made of the same material as Batman’s armor, enabling them to pierce his suit. Plus, when one member of Bruce’s circle learns Arkham Knight’s identity, their exchange suggests the two are familiar. Tomasi does an excellent job of building tension throughout the book, clearly implying the Arkham Knight is someone well-known to Bruce, thus promising some great conflict in future issues.

Speaking of tension, the storytelling in Detective Comics #1002 has a great sense of dynamism. We build to multiple standoffs, but never lose momentum after one resolves. Instead, the tension lingers, adding additional layers to the story.

What makes the Arkham Knight a great antagonist is that the character is a physical embodiment of questions that have haunted Batman’s legacy for decades. Is what he does moral? Is his war on crime doing more harm than good? Readers can form an opinion, but it’s difficult to form an objective impression.

The action is well-paced throughout, but it’s in the book’s first half where we can really appreciate the choreographed look. Andrew Hennessy provides the inks, which mesh well with Walker’s art style.

Nathan Fairbairn is on color duty again, offering an unusually-light palette for a Batman title. It’s an unconventional look, but it works well alongside the lines.

DETECTIVE COMICS #1002 deepens an intriguing story, suggesting questions that can shake Batman's legitimacy to his core. The storytelling is sharp, the artwork is crisp, and readers are sure to come away from this issue eager for the next installment.Review: Dark Knight vs. Arkham Knight in DETECTIVE COMICS #1002