Review: The End is Nigh in DCEASED #6

This is it. The fate of the Earth—and the universe at large—comes down to the actions of our heroes in DCeased #6, out this week from DC Comics.

The infected Clark lays waste to the planet, leaving the remaining Justice League members to plot how to take him down and rescue as many survivors as possible. Readers will be left guessing right up until the last page how humanity could even hope to survive this apocalypse. 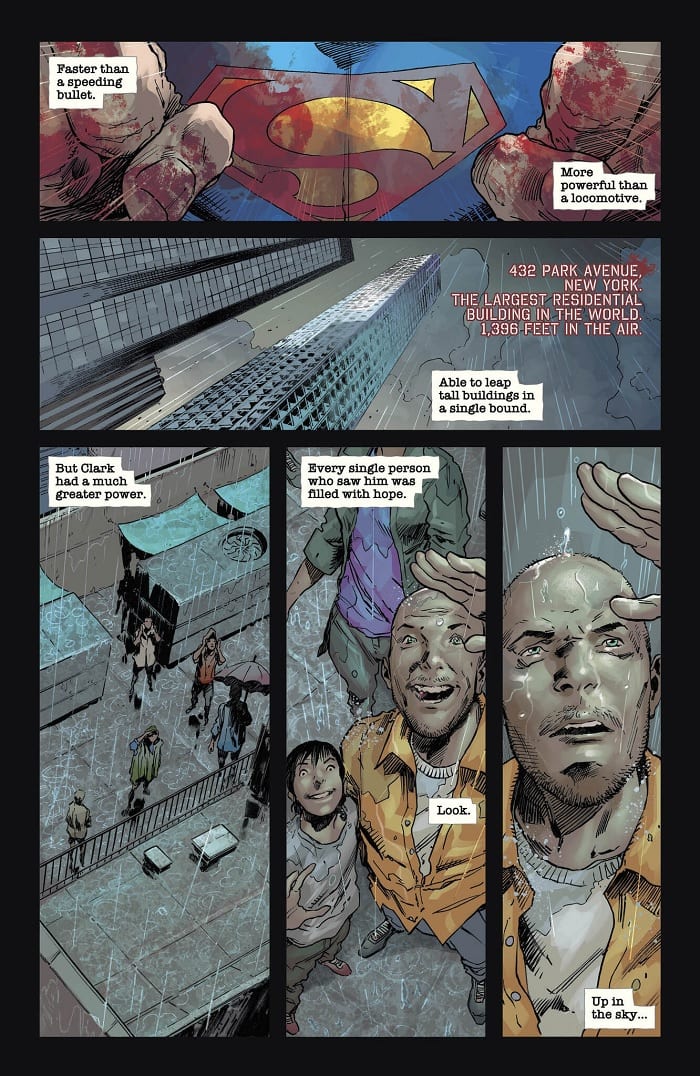 First, we have to note that when looking at the series in its entirety, we find that much of the storytelling throughout DCeased has been rather expository. Lois editorializes, while summarizing the action on the page to fit the story within a compact six issues.

At one point in DCeased #6, for instance, Lois says “We had to find a way to live with what we were doing. Or no one would live at all.” We don’t, however, see any of the heroes visibly struggle with that quandary. There’s little time spent in questioning their actions; everyone is all business, with no second guesses. While it makes for concise storytelling, it’s not exceptionally dynamic or complex. Some characters can feel rather flat as a result. That said, writer Tom Taylor managed to make this work through clever use of his framing device.

Telling the story primarily through Lois’s recollections was a gamble. However, the frame used throughout the book kept the reader grounded within one character’s point-of-view, allowing for reasonably intimate storytelling. It’s as if we’re reading the character’s diary, and that keeps us grounded in a story that could, otherwise, have felt overly-rushed and compacted.

That’s not to say that there aren’t moments where other characters get the chance to emote, though. DCeased #6 offers a good balance of emotional tones, spanning considerable distance without clashing. Goodbyes between characters who know they’ll never meet again feel suitably heavy. Yet even in the darkest of times, there’s still room for humor. Early in DCeased #6, for example, it’s revealed that Bruce left Damian with takedown plans for all the members of the Justice League, echoing the JLA: Tower of Babel storyline. One member, however, is conspicuously left out of Bruce’s playbook, leading to a funny exchange.

In all, it’s an excellent showcase from Taylor. Without giving anything away, it’s safe saying that Lois’s final monologue could be interpreted in multiple ways, given how that last panel is composed. How one chooses to read it determines whether the book ultimately has a positive or negative ending. 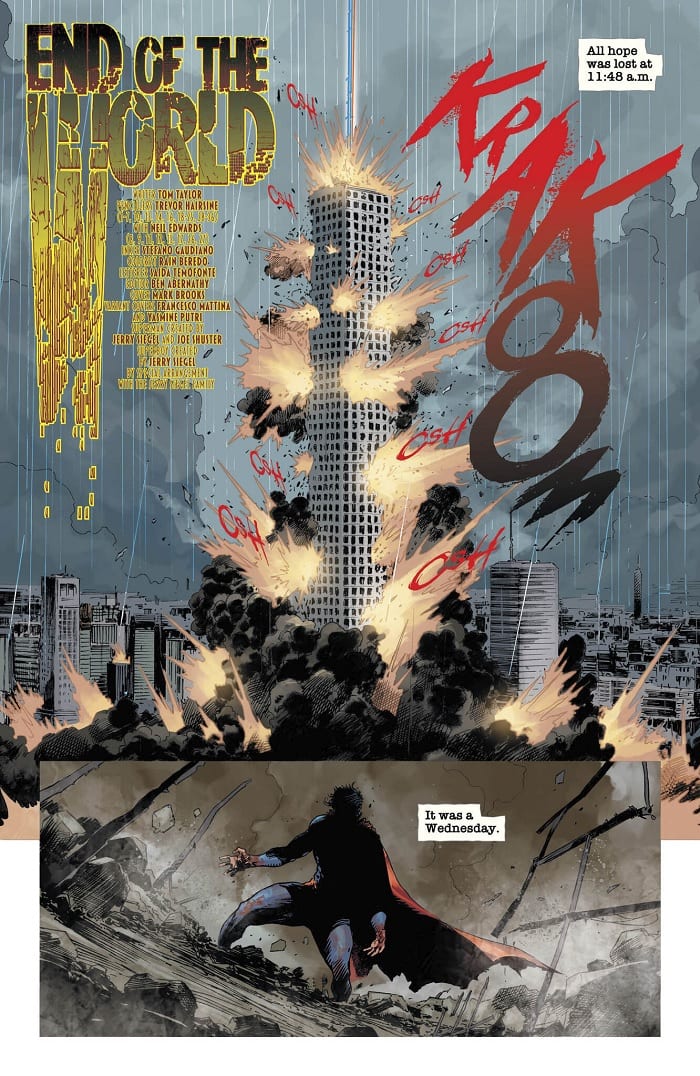 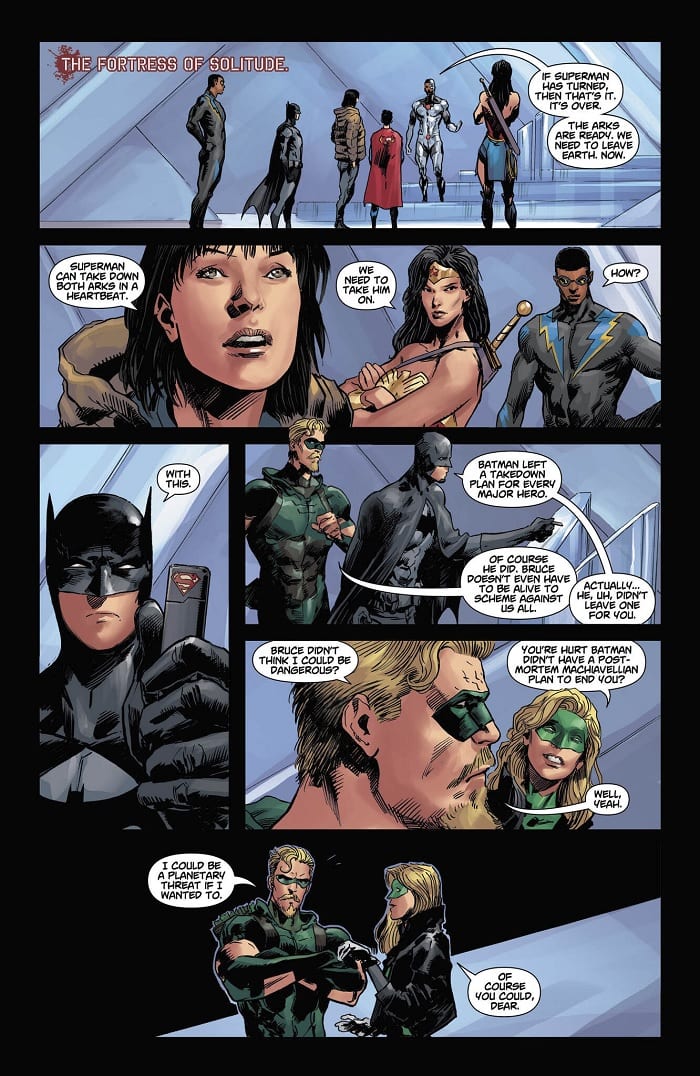 DCeased #6 features some truly breathtaking art courtesy of Trevor Hairsine, Neil Edwards, and Stefano Gaudiano. The work’s strongest asset is its incredible detail; the creators meticulously illustrate even the smallest elements, down to blades of grass and distant background structures. It’s clear that a lot of careful and caring attention went into each page of this book.

For all the richness of the artwork, though, the images are not always the most cohesive from panel to panel. While pages hit the story beats well, the art can be almost overwhelming, leaving the eye unsure of where to focus.

To compensate, Hairsine and Edwards infuse each panel of DCeased #6 with as much energy as possible. Figures and objects jump off the page, while faces and body language are incredibly lively. As a whole, it’s some of the most dynamic visual storytelling of the year, propelling the reader through the book.

Colorist Rain Beredo had his work cut out with this incredible level of detail. However, the artist doesn’t back down from the challenge. The colors are crisp and varied, while matching the level of care present in the linework. 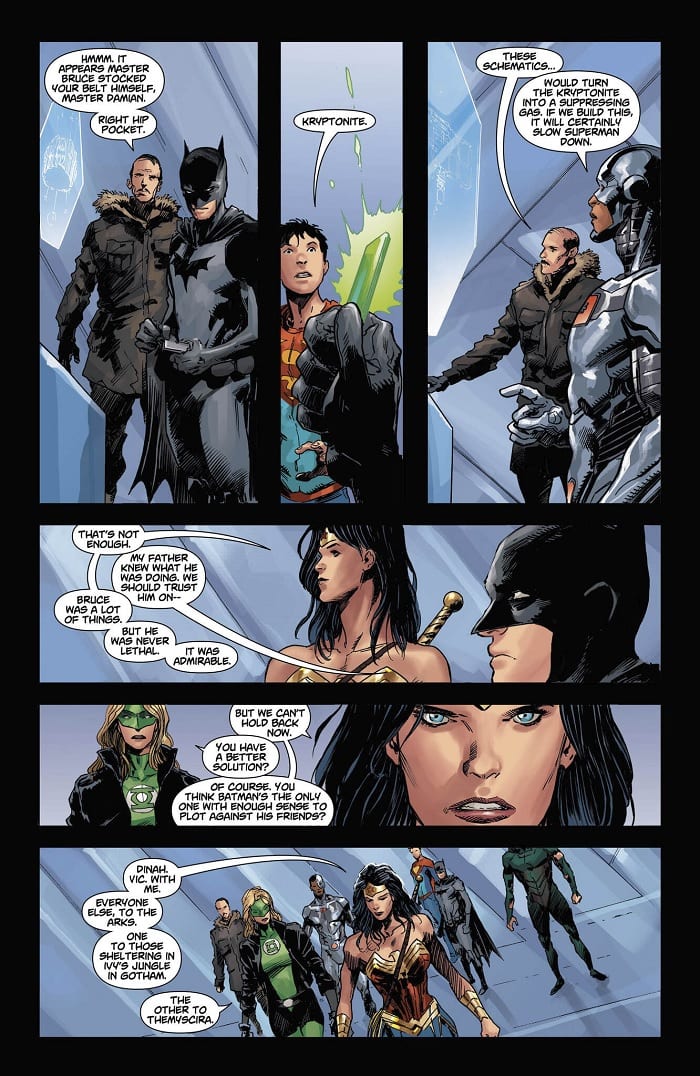 I was somewhat skeptical of DCeased when I first heard about it. However, it’s proved to be one of the most surprisingly-engaging DC stories of the year, and DCeased #6 ends the run on a high note. Definitely recommended.

Review: The End is Nigh in DCEASED #6DCEASED #6 is a gripping conclusion to an intensely captivating run. Fans of action and horror comics won’t be let down by this emotionally-dynamic read.