As Frank and Matt make their way through the death permeating Hell’s Kitchen, and Frank dishing out more than his fair share, we get closer to uncovering the mystery of The Blacksmith. Matt tracks down Madame Gao, another returning villain from Season 1 while Frank has a sit-down with Karen, who can’t seem to help getting herself wrapped into the world of danger.

Overall, this is an episode of people finding answers to their big problems. While we don’t yet know who this Blacksmith is, we get more insight, as Matt sits down with Madame Gao, and Frank tracks down a prime suspect onto a boat. Foggy, hospitalized after the fake Punisher shooting, had thought his law career might be over, but Marci – Foggy’s equivalent of Elektra – comes to tell him he may have a chance at lawyering in the big leagues. Claire gets her moment in the sun, shaming the other hospital workers who are covering up for The Hand’s attack, before resigning. This may be Netflix’s way of opening up Claire to taking on the Night Nurse mantle full-time, but for now, she’s no longer on call at Daredevil. Supposedly, anyways.

Speaking of supposed farewells, the episode ended with a Stick-Elektra standoff, where only one is likely to walk away, and the possible death of Punisher. Now for a character that’s been hyped up as much as Frank Castle has been, it seems unlikely that he’s gone for good, but it is a real possibility. Frank uses his freedom to do something most doomed characters on TV shows do – dispense advice to as many main characters as possible. He advises Karen to keep after Matt because the ones that hurt you the most are the people that care the most. Then, when on the boat hunting down The Blacksmith, Frank warns Daredevil not to go down his same route, claiming that “You cross over to my side of the line, you don’t get to come back from that.” Unlike his Episode 3 tirade, Frank seems to respect Matt’s moral code – that, or he just doesn’t care, now that he may have brought down the man responsible for his family’s murder. 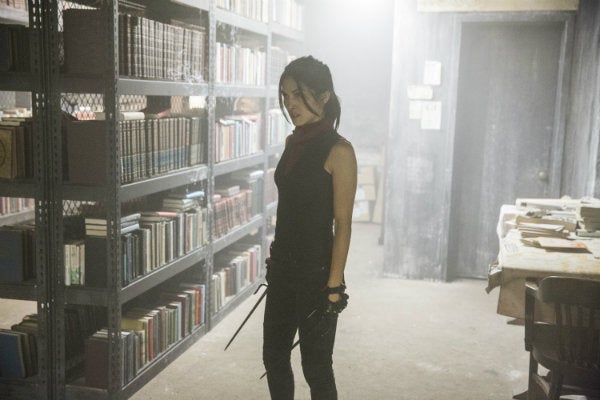 As far as what comes next for the series, it’s hard to say. Karen seems to have a propensity for getting herself in danger, and she spends the majority of this episode crying over events. That being said, now that she’s seen the brutal nature of Frank’s actions first-hand, it’s possible she’ll make more of an effort to separate herself from the carnage. Kingpin may not be done exercising his power from prison so he may have a hand in the final conflict. Whether or not Elektra and Stick’s fight goes to the death, it’ll likely have some effect on their larger conflict against The Hand. Speaking of which, who knows what the deal with the bleeding Children of the Corn is, but there’s no way it bodes well for our heroes. But as Matt stares out the window, taking in the sounds of violence and danger, there’s no doubt that Daredevil has not seen the end of its carnage, despite losing Punisher, its greatest harbinger. We’ll have to see whether he comes back, or if Frank Castle died in a viking funeral blaze of glory.