Review: the Sins of the Father & the Son in BATMAN #84

Thomas Wayne has masterminded all the misfortunes and tragedies to befall his son over the last three-and-a-half years of Batman comics. What, precisely, was his motivation, though? Was it all, as he claims in Batman #84, out this week from DC Comics, to try and save Bruce? Was he attempting to spare his son the misery and loneliness he knows? Or was there something else driving his mission? 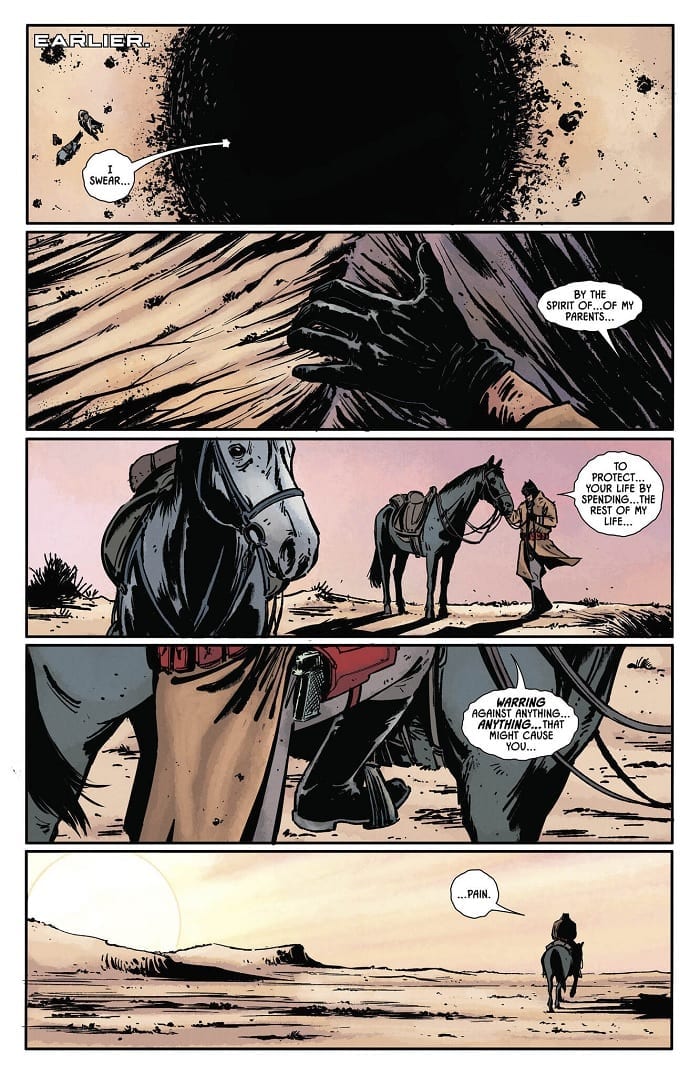 Most of the issue is, in effect, merely a recap of the events that led Thomas Wayne to this point. Batman #84 begins with him crawling out of the pit after defeating Bruce back in Batman #73. As he does, he utters an inverse, parodic version of Bruce’s own now-famous vow.

From there, we move scene by scene, all the way back to Bruce’s childhood. In the process, we watch as Thomas endures tragedy after tragedy. Bruce, Alfred, Selina, Martha…one before another, he loses them. True, this issue slices through the tension of the book’s climax to provide exposition. However, it’s a welcome interjection, given the context it provides.

Batman #84 is a dissection of how Thomas became the twisted and vengeful crime fighter he is now. More precisely, though, it’s about why he takes the actions he does. When he asks whether it’s possible “to be happy and be Batman,” the answer he unequivocally finds is “no.” To him, the Batman’s war on crime brings only pain and suffering. Hence, why he’s made it his mission to stop Bruce from being Batman at any cost. We’re left to question, though, his true motivations behind that seemingly-altruistic sentiment.

Thomas claims he’s only trying to protect Bruce. He wants his son to avoid his own fate; as he puts it, “Take off the mask. Marry the girl. Settle into a life of warmth and peace.” In effect, though, it could be as much about control as it is about genuine concern. Thomas’s pain at learning what his son becomes is too much for him, and so he sets out to stop Bruce from becoming Batman for his own sake, not for Bruce’s.

Based on what we see in Batman #84, one could argue that it wasn’t being Batman that brought Thomas Wayne misery; he was already consumed by misery long before he donned the cape and cowl. Thomas Wayne’s experience of being Batman is pain and unhappiness, and so he believes that to be Batman is pain and unhappiness. Bruce presents the antithesis: that one can be Batman and still find happiness despite the trauma and pain that it entails. 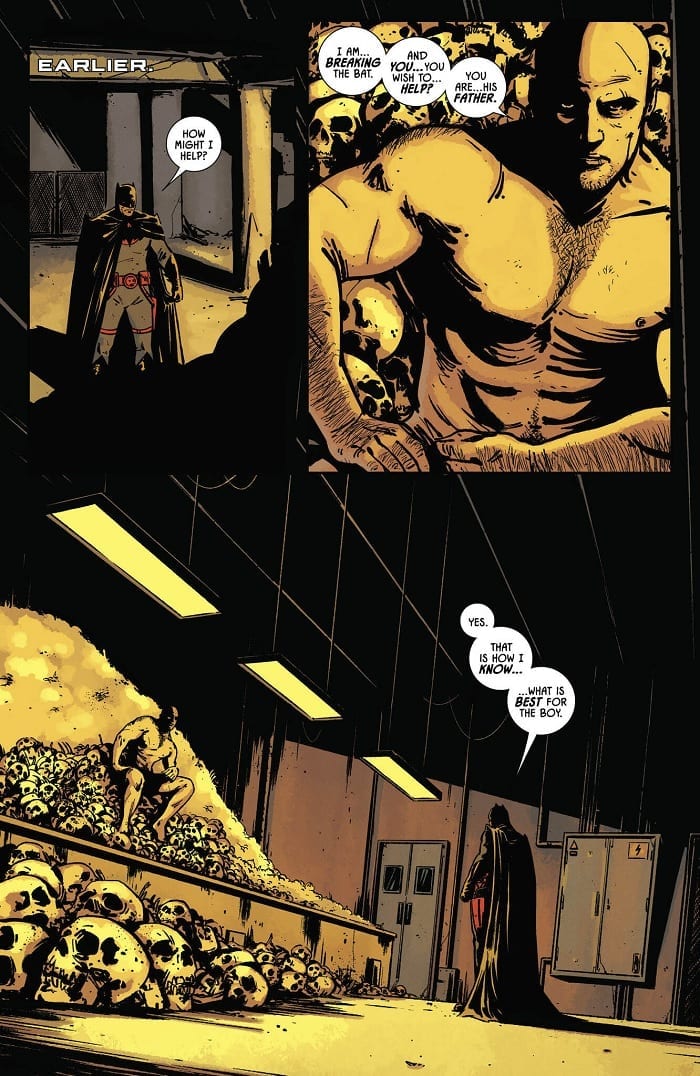 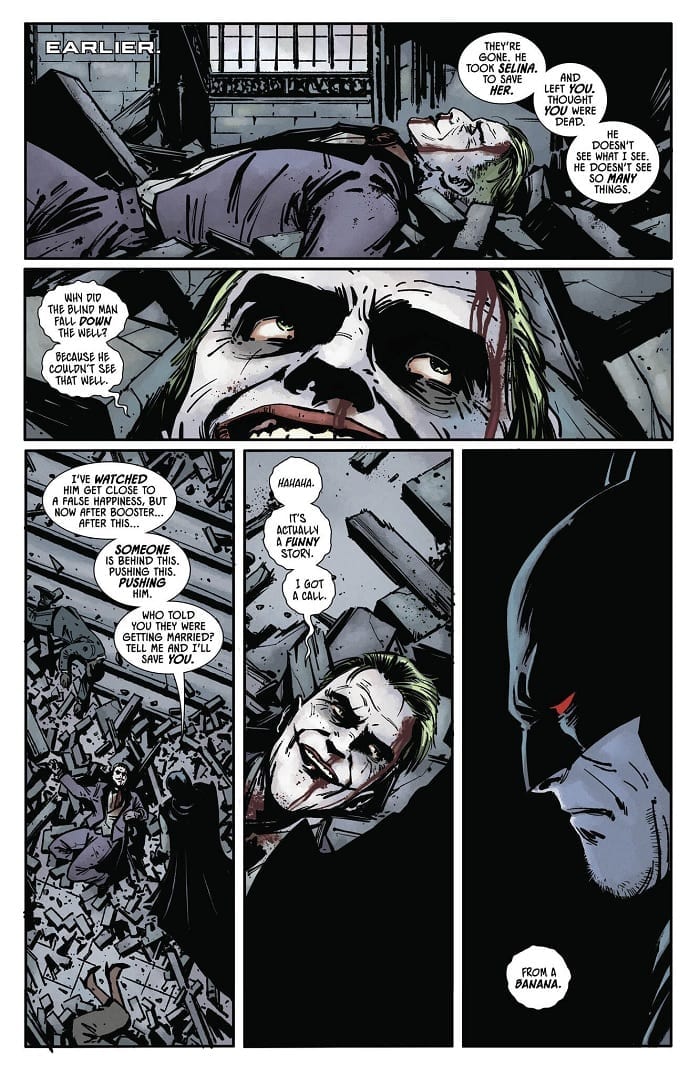 The artwork by Jorge Fornes is nice and stylish. Although the book is, in essence, a clip show that traverses an expansive number of locations and settings, the artwork manages to maintain a sense of tonal consistency.

There’s plenty of dynamism in how Fornes frames the figures in Batman #84. We have close-ups honed on the characters’ faces, interspersed with wide, dramatic shots that feel pulled right from the pages of a dark western book. All throughout, though, the images rely on that theme of repetition that’s been a hallmark of the book over these last 84 issues, which keeps things cohesive.

The line work is bold and thick, yet not overbearing. Despite the heavier lines, the inks in Batman #84 still retain a sense of crispness, which compliments the skill of the artists. We see it especially in the intense detailing in the backgrounds, which really ground the reader in the world of the book.

The colors by artist Jordie Bellaire are similarly impressive. Despite crossing numerous palettes for the different moments in the book, the work retains a consistently shadowy, moody feel. This serves to highlight the dark tone of the tragedy unfolding on the page. 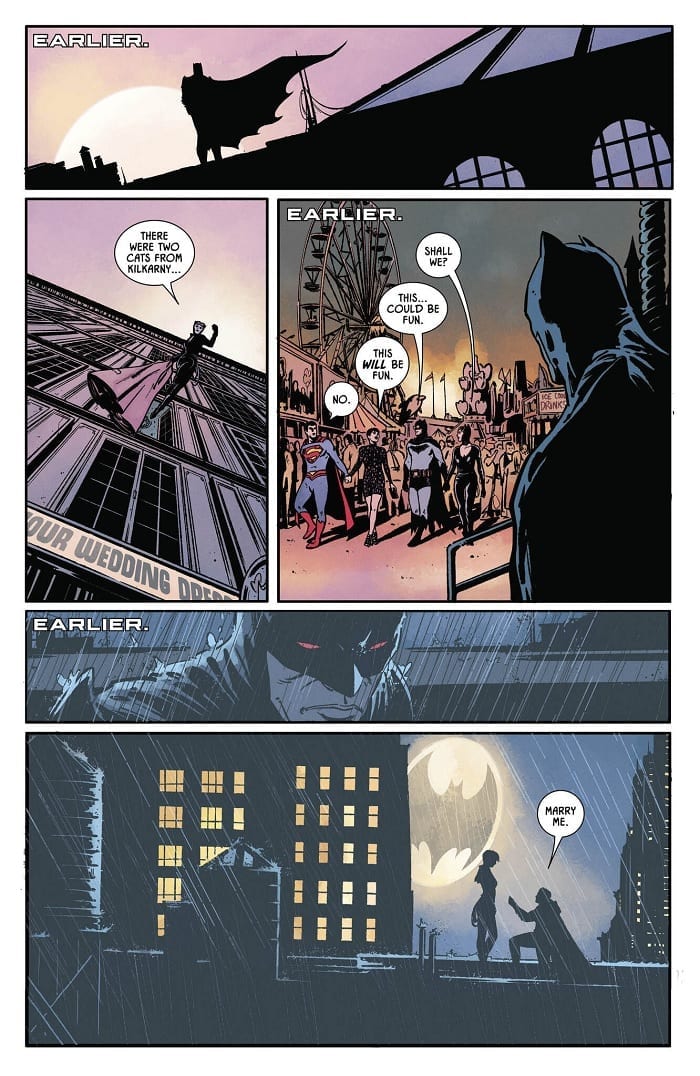 One could see Batman #84 being a controversial choice for the penultimate issue of a long-running story. That said, the book very effectively frames the underlying theme of writer Tom King’s run. It has a cinematic flair to it, and it’s great stuff, overall.

Review: the Sins of the Father & the Son in BATMAN #84In the penultimate issue of his run on the series, writer Tom King uses an extended series of flashbacks to lay out the tragedy of Thomas Wayne's life and his motivations. It points to the central question of his run: "can Batman be happy?" While not the most action-packed issue, BATMAN #84 is a fascinating character study.