Review: Sending a Message to Bane in BATMAN #79

Bruce and Selina’s beach vacation continues in Batman #79, out this week from DC Comics. Occurring before the events of Batman #77, we see the pair continuing to prep for their assault on occupied Gotham, while also plotting to interrupt a shipment of Venom being moved by Magpie. 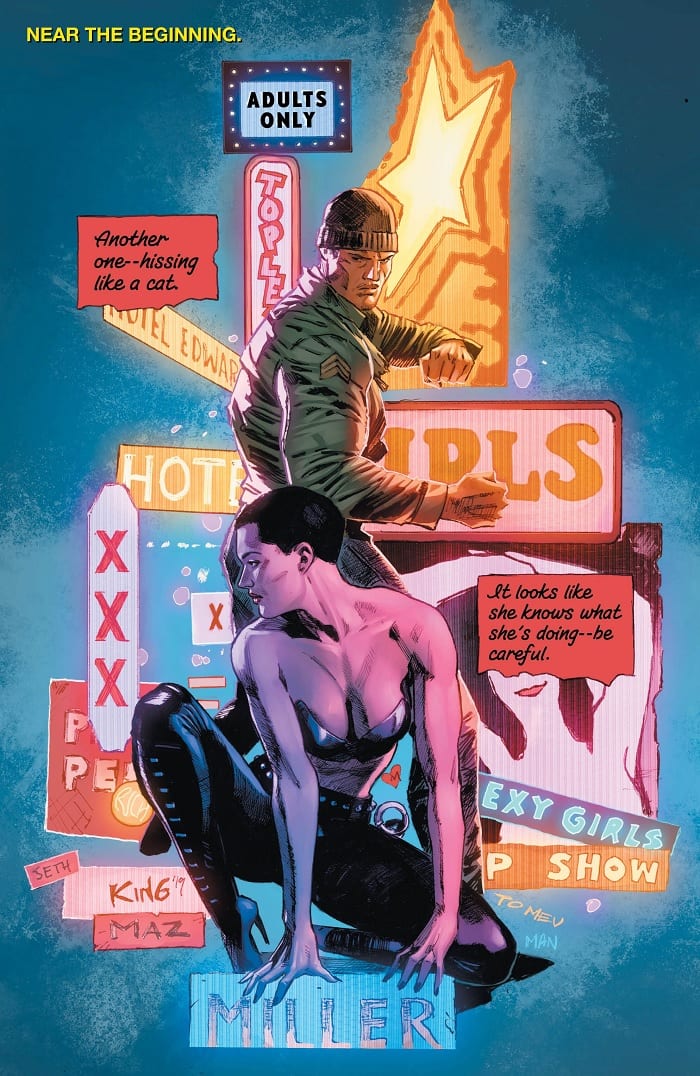 Batman #79 is, admittedly, not the most exciting chapter in the story. Action and narrative direction still largely take a backseat, as they did in our last issue. Even the Venom bust is largely treated as an afterthought, only worthy of a couple of pages. Instead, writer Tom King elects to focus on continuing to rebuild Bruce and Selina’s relationship.

Throughout the issue, the pair bickers back and forth about where they first met. Was it on the streets, as portrayed in Frank Miller’s Batman: Year One? Or, was it on a ship, à la Catwoman’s Golden Age introduction in the pages of an early Batman issue?

The conversation at first feels somewhat banal throughout Batman #79. By the end of the book, though, it begins taking on more significance and poignancy. Bruce and Selina first met before he donned the cowl, made his vow, and truly became The Batman. Bruce’s relationship with Selina predates his relationship with his own iconic persona. Given that, perhaps it’s possible for Bruce to reconcile his vow and his love for her.

The thesis motivating King’s entire run on this series comes down to a singular question: “can a character who’s motivated by trauma actually heal and find happiness?” This doesn’t come from nowhere; in fact, it’s a long-debated topic among fans. While the last several issues have seemed to suggest the author’s answer, Batman #79 codifies it in certain terms. This book, more than most in King’s run, tackles this question head-on. Thus, while not the most engrossing chapter in the story, this issue does carry narrative weight. With Batman #79, it feels like we’re clearly advancing the story, and the concept that motivates it. 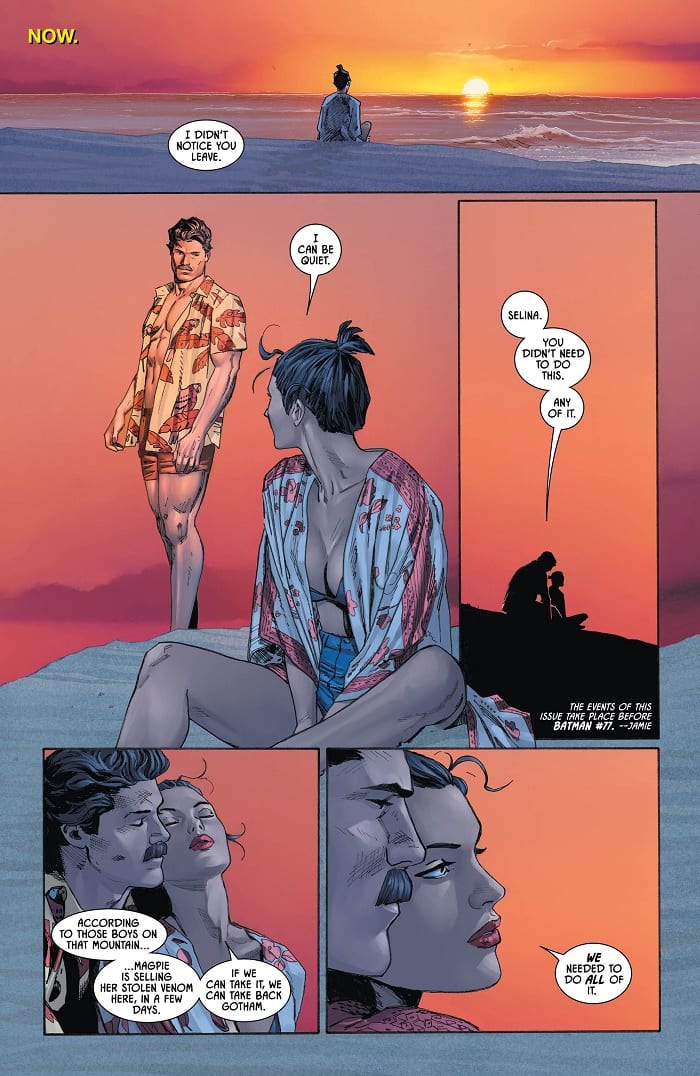 Clay Mann is back on art duties for Batman #79. He approaches the work in a similar manner as our last issue; we see a lot of use of repetition with subtle variation to advance the story while maintaining cohesion.

Even when the artist breaks with the repetition, there are visual motifs throughout. We see a lot of wide-shot panels in which the figures displayed are centered within the image. Of course, these are often interspersed with extended segments of close-cropped panels in which we may only see part of an object or a character’s face repeated. As with our last issue, the manner in which Mann approaches the book lends it a very cinematic feel.

Tomeu Morey is on colors in Batman #79, bringing much of the same bright palette as we saw in our last issue. More of this book takes place at dusk and night, though, allowing Mann to play with a wider range of tones. He captures these moments in rather stunning lighting; it fits tonally, while remaining vibrant and eye-catching. Excellent work overall.

Batman #79 is an interesting chapter in the story. While still keeping our focus away from the crux of the action, it is entertaining and thematically-packed, making it an essential chapter in Tom King’s narrative.

BATMAN #79 cuts to the thematic core of Tom King's multi-year story. While still diverting from the main action, it lays out vital context and sets us up for the climactic showdown. It's an essential issue.Review: Sending a Message to Bane in BATMAN #79