Review: ASCENDER #7 Retells the Story of Jonah and the Whale

ASCENDER #7, available in stores on Wednesday, November 27th, is unique in this series in that it features the story of Telsa, one of the main characters from the DESCENDER series. Mila and Andy recently ran into her at the Sampson docks and asked her to help them escape from Mother’s vampiric forces. The former solider refused to help, hoping to escape the demons of the past. But an attack on their ship propels her into the bay, leaving her at the mercy of the ocean, and what lies within its water depths.

Telsa, starring into the eye of a giant whale, loses all hope of escape. A horde of vampiric shark creatures flank her sides, leaving her exposed to the larger being’s gaping mouth, which engulfs her.

With her first mate Helda left above water on the ship, Telsa faces her deepest regrets in the form of flashbacks, which take place during the 10-year gap between DESCENDER and ASCENDER. We see how the hero struggled to fulfill her duty as a soldier despite the utter hopeless left in the aftermath of the machine wars. 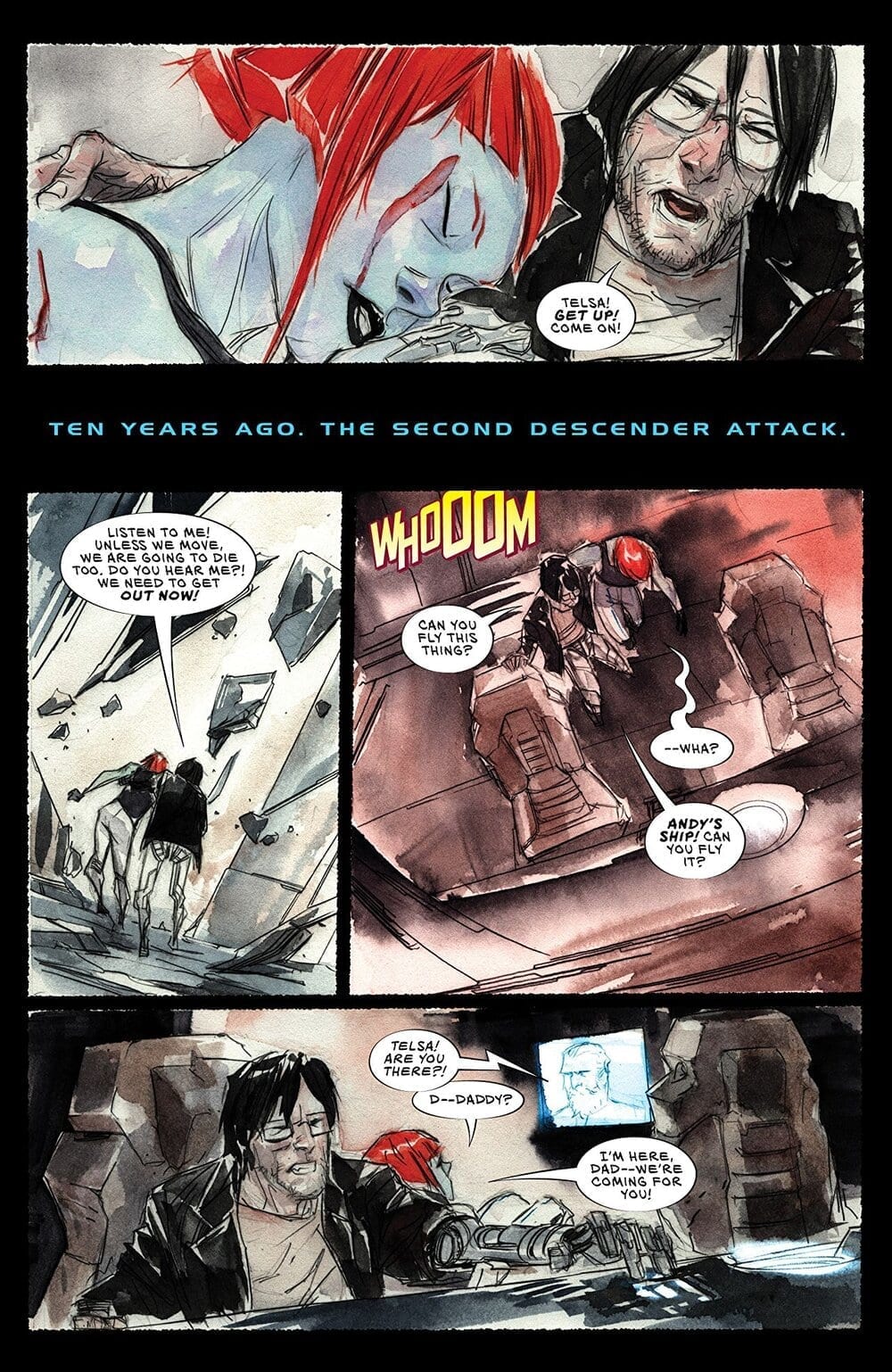 Writer Jeff Lemire brilliantly retells the story of Jonah through the medium of Telsa and her predicament. Much like the biblical figure, Telsa finds herself in the belly of an aquatic creature after refusing to partake in the destiny laid out before her. Our hero spends this time reliving her past regrets and finds the courage to be the person she was meant to be. What’s more, we learn of her initial encounter with Mother’s vampiric creatures and how she escaped from them.

The artwork within ASCENDER #7 sets a dreary, dystopic tone fitting of the narrative. Dustin Nguyen’s unique penciling, ink work, and coloring offers a bleak yet emotive expressionism that’s hard to find in comics today. His relatively simple drawing style create highly expressive faces that allow us to actually feel the regret, fear, and rage of Telsa and Helda. There’s also a clever juxtaposition between the dull shades of the undead word of Niyrata and the brighter colors of the living.

Steve Wands’ lettering offered a few cool features as well. One such feature is the use of a font style reminiscent of Star Wars to represent time jumps, which helps readers relive Telsa’s memories as those it were read from a storybook.

Nguyen’s cover artwork features Telsa plummeting to depths of the ocean, all the while watched by the eye of what looks to be an enormous whale. We feel her utter helplessness as she faces forces beyond her control.

ASCENDER #7 frames its story with the Jonah’s narrative, yet moves past the original by showing the people around Telsa who encouraged her to become the hero she is today. Readers will be anxious to see if she escapes her prison in the watery depths and continues the fight.

What other questions does this issue bring up regarding Telsa’s past? Let us know in the comments below!

Review: ASCENDER #7 Retells the Story of Jonah and the WhaleWriter brilliantly Jeff Lemire retells the story of Jonah through the medium of Telsa and her predicament. Much like the biblical figure, Telsa finds herself in the belly of an aquatic creature after refusing to partake in the destiny laid out before her.