An homage to turf war films like The Warriors and The Outsiders, 20 Fists #1 is written by Frankee White, with art by Kat Baumann, and lettering by DC Hopkins. The first issue is currently crowdsourcing on Kickstarter. 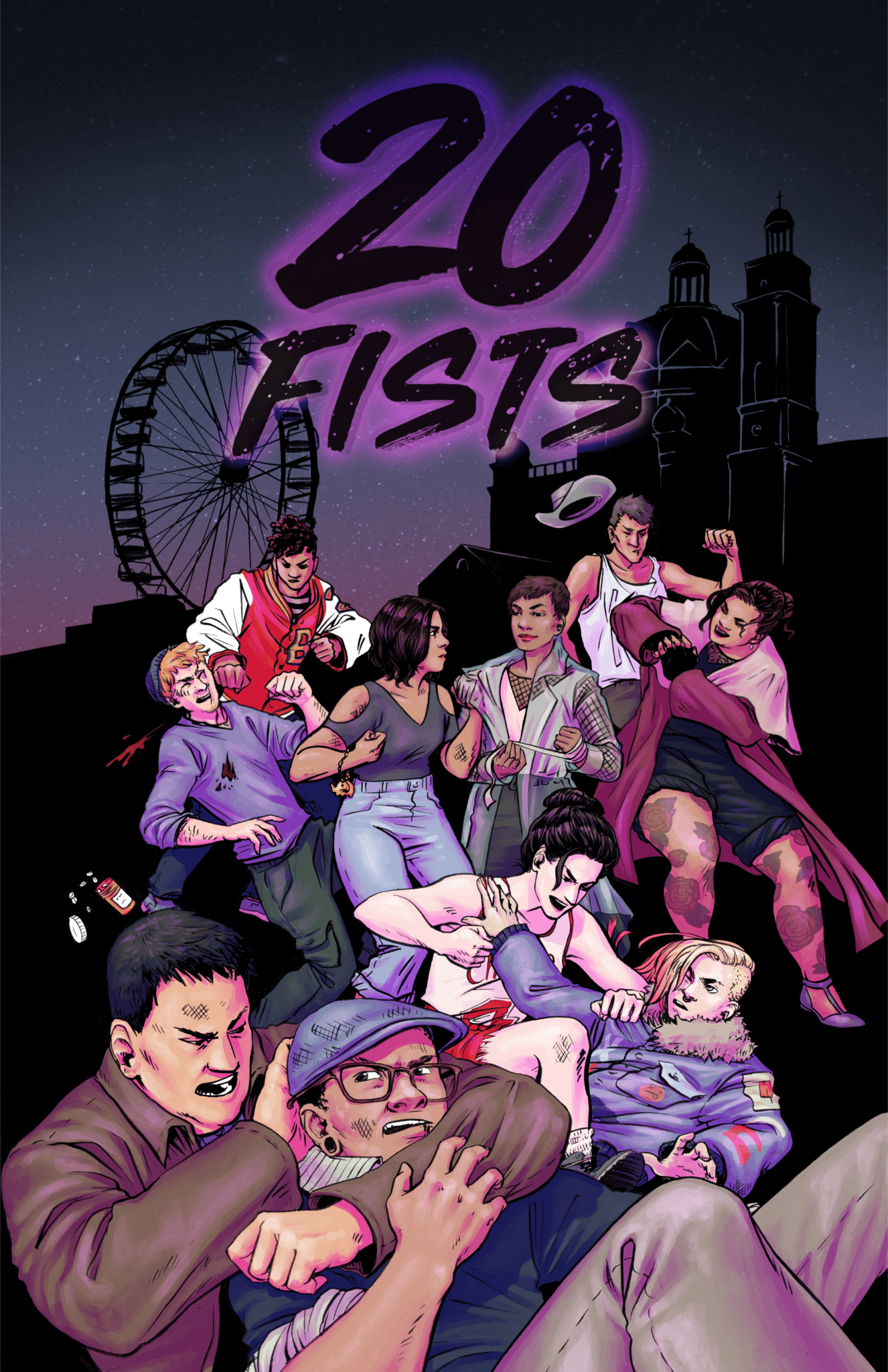 20 FISTS is a queer Romeo & Juliet during a break-up meets The Warriors.  It’s a tale as old as time. Two women, who met on the battleground, find themselves sorting through the rubble of their relationship in the illegal and unlicensed fight league that runs rampant throughout their city. Issue #1 features two chapters: Round One is the first part of the fight between The No Names & The Big Jackets. Following Round One is a flashback that sets up the growing friction between Chel, Billie, and their crews.

In 20 Fists, writer Frankee White successfully manages to put the reader in the middle of the action right from the get go. There is little dialogue in the first half of this book, which adds to the tension within the pages. It forces the reader to question which one of the rival gangs will strike first, and when.  And just as the heated battle begins, it ends, and we are then thrust into the past, getting a glimpse as to why these rival street gangs decided to rumble. In the midst of the brewing feud, there is a romance in the vein of Romeo & Juliet. Here, White brings the much needed exposition, giving the reader a good sense of the individuals who make up these rival gangs.

Artist Kat Baumann crafts a grungy and broken world in 20 Fists #1. The very first page perfectly sets up the tone of the book. The buildings are cracked and dilapidated, with a steeple looming in the background. The sky is black and starless, as if a dark cloud hangs just above. Baumann also does commendable character work, helping distinguish the members of the rival gangs through their hairstyles and clothing.

The lettering by DC Hopkins stands out particularly well, with the clever additions of sound effects, using onomatopoeic words frequently for anything from loud music to glass clinking and cigarette inhalation.

You can pick up a copy of 20 Fists by supporting it on Kickstarter. For more information on this book, follow writer White on Twitter and Gumroad.

Do you have an independent or small press book crowdfunding on Kickstarter to review? Let us know!

20 Fists #1 has that 80s-inspired flavor of street-level brawls and over-the-top wardrobes. If you're a fan of movies like 'The Warriors' and 'The Outsiders' with a little forbidden love thrown in, this is the book for you.Review: 20 FISTS #1 Is An 80s-Centric Romantic Rumble