KING-SIZE CONAN: The Epic Nature Of The Cimmerian

King-Size Conan is Marvel Comics celebrating the 50th anniversary of its first Conan The Barbarian comic. Releasing on December 23, this anthology brings several notable creatives who have a history with Conan. These include writers Roy Thomas, Kurt Busiek, Chris Claremont, Kevin Eastman, and Steven S. DeKnight. The artists on the book are Steven McNiven, Pete Woods, Roberto de la Torre, Jesus Saiz, as well as colorists Ive Svorcina, Carlos Lopez, and Neeraj Menon illustrate each depiction. Wrapping them all up is letterer Travis Lanham, acting almost like a chronicler to Conan’s adventures. 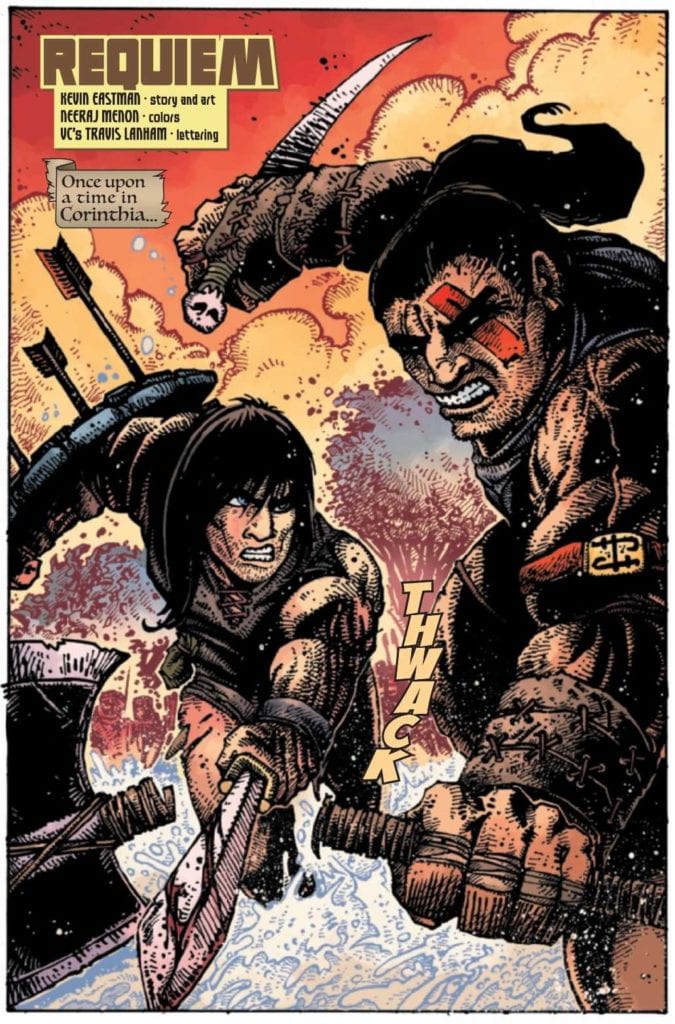 The nearly century-old character of Conan has many depictions, “Barbarian” just being one of several titles in King-Size Conan. Within Thomas’ “Aftermath–and a Beginning,” readers see the classic depiction of Conan’s struggle against civilization. One of Conan’s defining characteristics that many readers identify with is his search for an identity. Conan doesn’t feel at home with his fellow Cimmerians with many of his family and friends dead. This serves as a motivator for Conan to go out into the world. Some of these adventures and encounters make Conan less prone to suicidal risks. That being said, Busiek’s “In The City Of Thieves” displays Conan as a smarmy pickpocket who robs the careless out of hedonism. 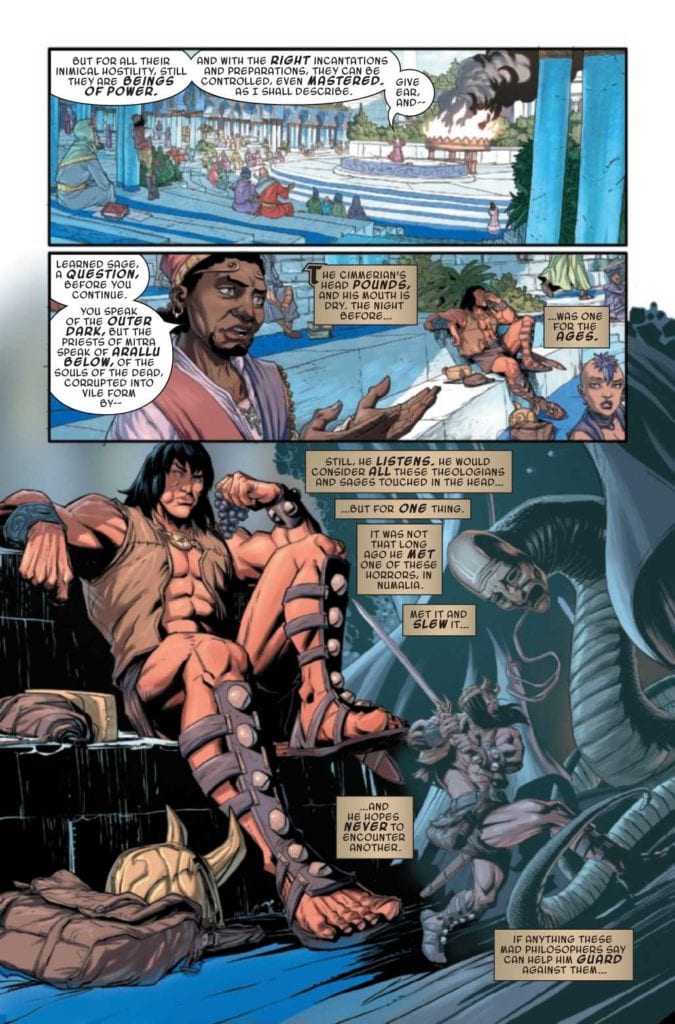 Let it be said that Conan is not without compassion; Claremont and Eastman write their segments of King-Size Conan to show the Cimmerian as less of a conqueror. “Die By The Sword” has Conan comforting the mourning daughter of a woman he slew. “Requiem” in the meantime shows the Cimmerian doing whatever is necessary to pay debts. These display warmth in a cold, cruel world where “might often makes right” and how Conan appreciates small moments of kindness. Because as DeKnight’s “Ship Of The Damned” showcases, these moments, while timeless, are fleeting like with his lost love Belit. Within the different segments, each artist in King-Size Conan showcases how they portray the legend of Conan. McNiven displays Conan’s pride in his Cimmerian heritage by adorning him in keepsakes of fallen loved ones. The coloring by Svorcina presents Conan and people like him standing out in fiery bright colors, unlike soldiers in armor. Woods demonstrates this further by how Conan stands out both in his simple attire within civilization and in bold line work. This is what makes de la Torre’s artwork of him practically blending into battle stand out; even Carlos Lopez’s coloring displays him in the same light as a soon to be dead character. Not only is Conan in his element, but he could very well die in such a place, something the Cimmerian admits is out of luck. 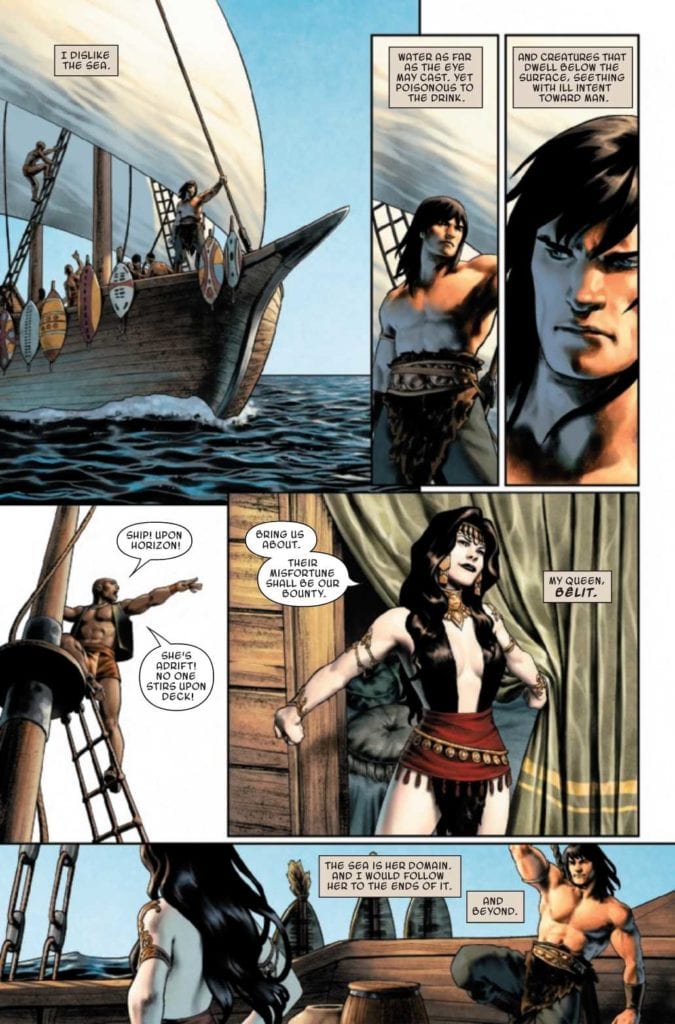 The rougher artwork by Eastman and coloring by Menon goes straight into the more action-oriented savagery. The detailing line work, actions in sequence, and color changes in reaction are an artform in symbology. Conan is a person of conflict, and it follows him wherever he goes. Finally, Saiz gives a photorealistic airbrush touch that displays the Cimmerian with someone his equal. Conan and Belit are larger-than-life characters who encounter the equally absurd. A ship made out of what looks like past victims is something that only Conan can survive. 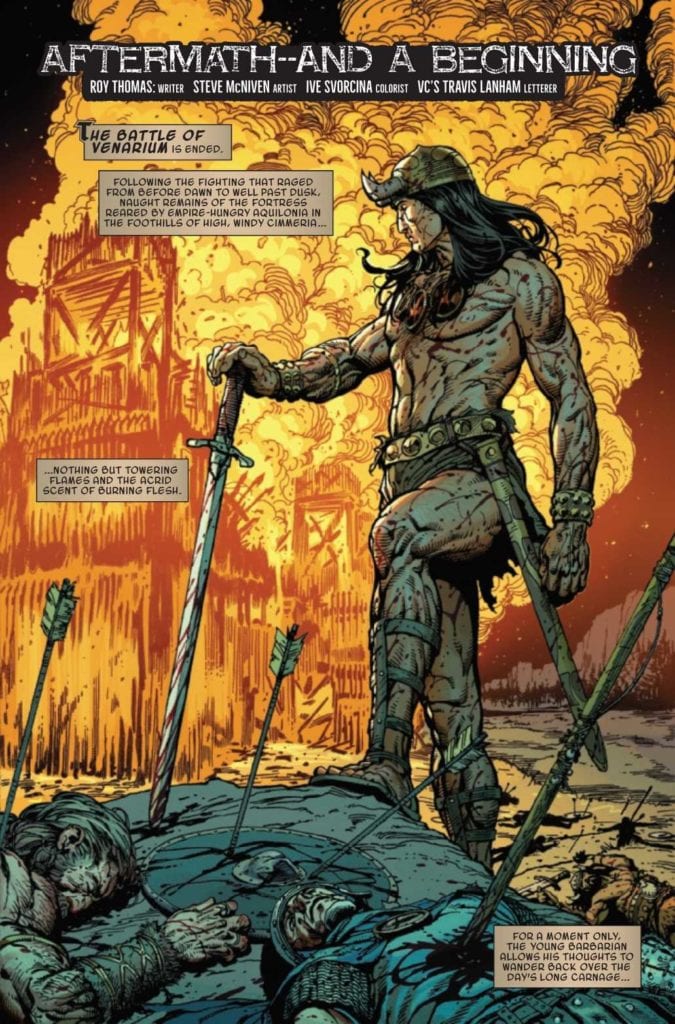 Anybody familiar with the line “Hither came Conan” seen in the beginning of King-Size Conan may likely equate VC’s Lanham with a Chronicler who tells Conan’s adventures. The captions help the reader appreciate the artwork for large scenes as moments frozen time. Unlike the short but sweet moments in action that hit hard and fast. Something that reappears in the last segment where Conan serves as narrator where his confines are simple and in the moment. Conan can certainly speak for himself when people gloss over or add parts to his story. The biggest takeaway comes in a papyrus-like caption at the end of the first story segment. It invites the readers to read Conan’s chronicles throughout Marvel’s run, for the story of Conan the Barbarian is ever-changing and revised.

King-Size Conan Is For Everyone

After getting back Conan, Marvel really goes out of its way to showcase its love for the Cimmerian. With so many at the pen, it’s nice to see how they interpret such a cultural icon. “Ship of the Damned” stands out over the other stories by displaying Conan’s beliefs at their utmost limit: live in the moment because you never know when you could lose them and the people you love… especially when you become a little more aware of yours and others fate. It’s what helps people like myself deal with an absurd world.

King-Size Conan is a celebration of Marvel's first issue with the Cimmerian. With notable creators showcasing the different sides of him and how they make up Conan, it's a must for diehard and newcomers alike.KING-SIZE CONAN: The Epic Nature Of The Cimmerian