Review: KING IN BLACK: PLANET OF THE SYMBIOTES #2 and Nostalgia

King In Black: Planet of the Symbiotes #2 features two C-List Marvel character stories, on February 17. Tying American Kaiju and Hornet together are two complementary stories about nostalgia. American Kaiju explores how the inspirations that propel people to action must come from an awareness of toxicity. Hornet meanwhile is about details how while inspirations have their downsides, they can still propel people to do good.

Opening with American Kaiju, writer Marc Bernardin dives right into the title of this section of Planet of the Symbiotes #2. The American Kaiju, Corporal Todd Ziller, lives the ultimate fantasy of a Marvel fan. The serum that makes him the American Kaiju is made up of several Marvel Universe elements like the Hulk, Ant-Man, and Captain America. Since a number of military soldiers, like Super Soldiers author Jason Inman are comic book fans, Ziller is able to connect with some real world fans more than others. Nothing beats actually sharing experiences with these heroes. 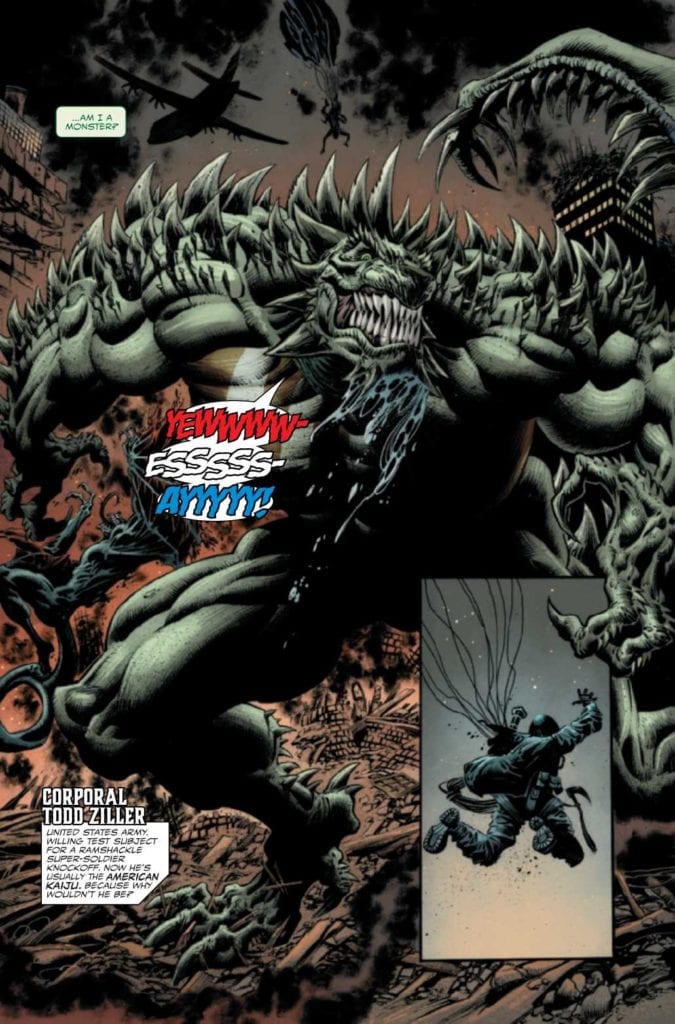 So what happens when fans, like Ziller, catch onto the downsides of superhero life when they live it? Artist Kyle Holtz and colorist Rachelle Rosenberg showcase a large grand design of American Kaiju, as a force of nature rampaging through the city. A buff giant green lizard with the American Flag on his chest practically screams Ziller’s sense of patriotism as much as his roaring of “USA!” But they also show in his fight with a giant symbiote dragon how he trashes the city, like using a public train as a weapon. Sure it looks cool but after this, the city folk will need some transportation when this is all over.

Meanwhile, in the other half of King In Black: Planet of the Symbiotes #2, there is a more positive story about nostalgia. Former Prowler Hobie Brown is called into action after leaving the superhero life behind. In contrast with the above story, writer Geoffry Thorne goes into the process of how nostalgia is still a process of inspiration. Hobie hasn’t quite given up the superhero attitude like the Prowler suit. Thing is, despite his girlfriend wanting Hobie out of that costume, she appreciates how he’s able to take charge in emergencies. 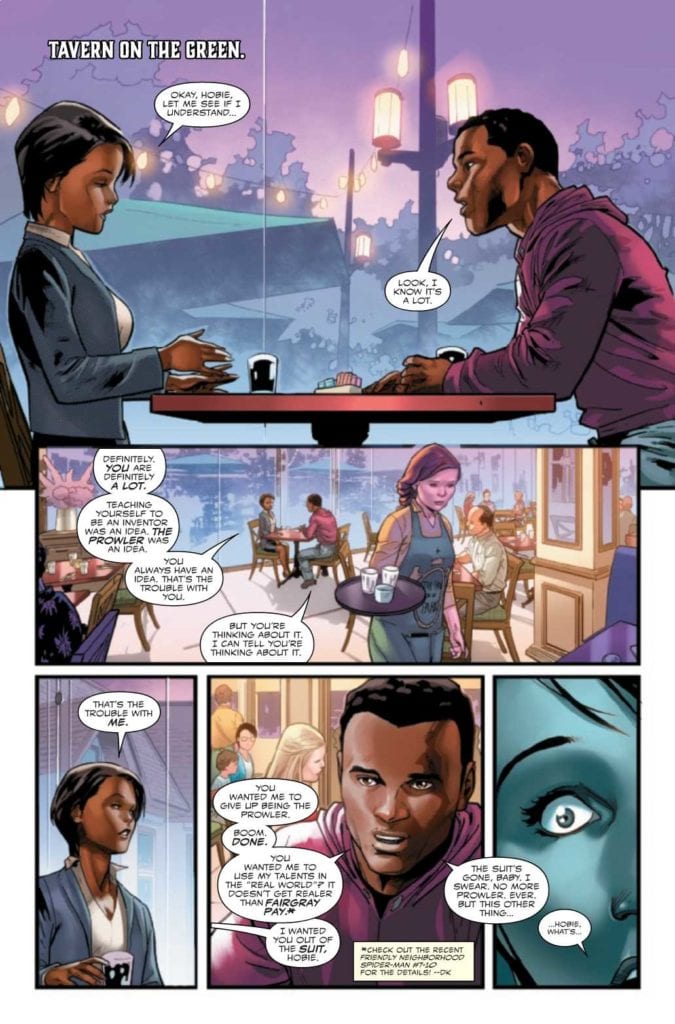 It’s this attachment to the past that can inspire people like Hobie to understand what they like and apply it in the rest of the world. It’s why artist Jan Bazada designs Hobie’s costume with the Prowler mask. Aside from good color balance provided by Rosenberg, it’s a period of transition that shows Hobie off with one last bit of glory. His technological expertise is on full display when he fights against the symbiotes, with cell phones no less! While Hobie is taking on one of Spider-Man’s other alter-egos, his actions here display how he earns the mantle of Hornet.

King In Black: Planet Of The Symbiotes #2 – Lettering

Tying King In Black: Planet of the Symbiotes #2 together is letterer Cory Petit of VC, giving characters distinctive voices. The limited speech of American Kaiju has its own coloration, coupled with loud SFX to evoke a sense of loud patriotism. That’s in juxtaposition to the green captions that express Ziller’s awareness of the situation and his own self-loathing.

The Hornet section, meanwhile, serves as a complete extension of Hobie in action. The word balloons help guide the reader throughout all the movements. The light purple SFX also tend to accompany every hit and tap on a phone. It’s what makes the reader naturally progress from action to reaction throughout the story.

Get King In Black: Planet Of The Symbiotes #2

King In Black: Planet of the Symbiotes #2 is an ideal tie-in for several reasons. By forgoing tying directly into the main plot of the crossover event and not interrupting currently running series, C and D-list characters get the chance to be seen. The efforts creators put into developing these characters internally and externally means more arcs need to follow. It’s what put this issue in the same ranks as the Black Knight tie-in.

King In Black #2 is a piece that gives C and D-Listers of Marvel with barely any ties to the main plot a chance to really shine for more developments.Review: KING IN BLACK: PLANET OF THE SYMBIOTES #2 and Nostalgia