Interview: Writer David Pepose Welcomes You Back to THE O.Z.

THE O.Z.‘s second Kickstarter launches today, and we spoke with writer David Pepose about the book, as well as his advice for aspiring comics creators. Plus: an exclusive reveal of Farid Karami’s epic variant cover!

What is THE O.Z.?
THE O.Z. is what you get when you mix The Wizard of Oz and The Hurt Locker. Years after Dorothy and her friends defeated the Wicked Witch of the West, Oz is in civil war. Dorothy’s granddaughter, a disillusioned Iraq War veteran, has to try and bring peace to the magical land.

About this issue:
Now leading the Resistance against the Scarecrow’s regime, Dorothy must join forces with the Tin Soldier, the Prince of Lions and Jack Pumpkinhead if she hopes to locate the all-powerful Silver Slippers and bring peace to the Occupied Zone… or as the locals call it, The O.Z.

The first issue of THE O.Z. was a brilliant re-introduction to Oz, full of familiar references and new, fresh emotional stakes. Issue #2 looks like it’s upping the ante on all counts. 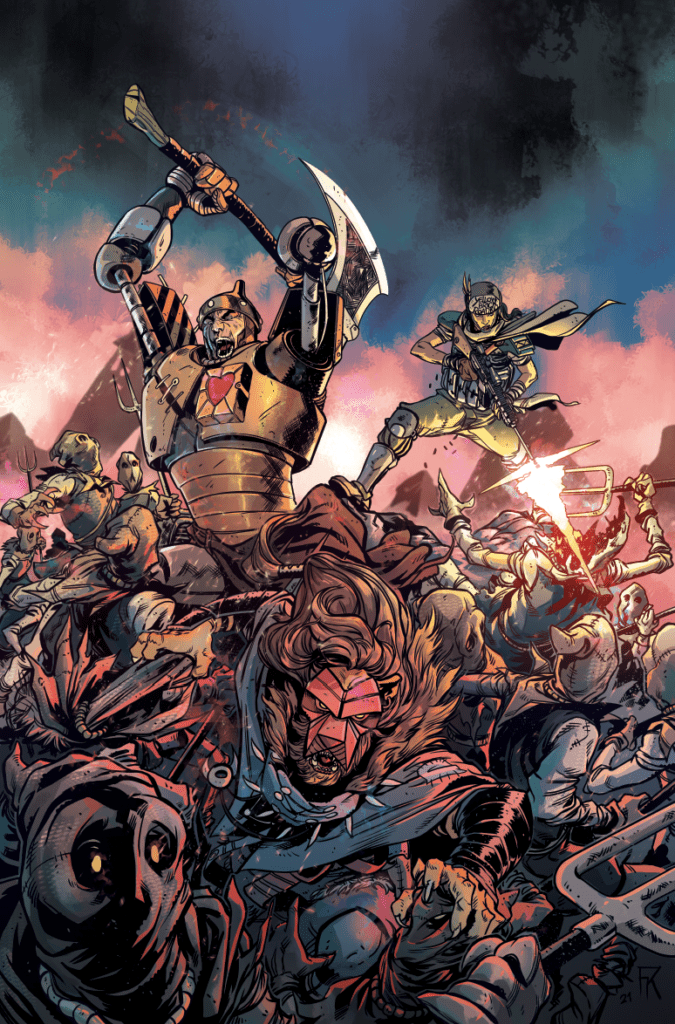 And read on for our full interview with Pepose:

Monkeys Fighting Robots: Issue #1 was a pretty explosive introduction to The O.Z. — how are you raising the stakes for issue #2?

David Pepose: Thank you! We’re raising the stakes in a big way in The O.Z. #2 — now that we’ve fully established Dorothy and a brief history of the Occupied Zone, we’re able to explore some dangerous new territory across the war-torn land of Oz. Dorothy’s managed to gain some ground for the Resistance, but as you’ll see in our Kickstarter preview, that reprieve is going to be short-lived — the location of the Silver Slippers has been revealed, and the Scarecrow aims to use them to invade the Multiverse. With Dorothy outnumbered and outgunned, she’s going to need reinforcements in a major way.

MFR: You’re adding some new players to the mix with this issue. What can you tell us about the Prince of Lions?

Pepose: I don’t want to spoil too much about him, but suffice to say, our take on the Courageous Lion is going to turn some heads. I’ll start by saying he’s Ruben’s favorite character to draw in the entire series, and will serve as sort of the rogue/stealth fighter of the book. For me, he was influenced a lot by Chadwick Boseman’s Black Panther, primarily in terms of the heaviness of the crown — it’s one thing to be brave when you’re fighting just for yourself. But how does the calculus of courage change when you’re the ruler of the Animal Kingdom? In that regard, I think the Lion and Dorothy have a lot in common — their stories are each about proving themselves in the face of an impossible legacy, which I think will make them click together nicely. 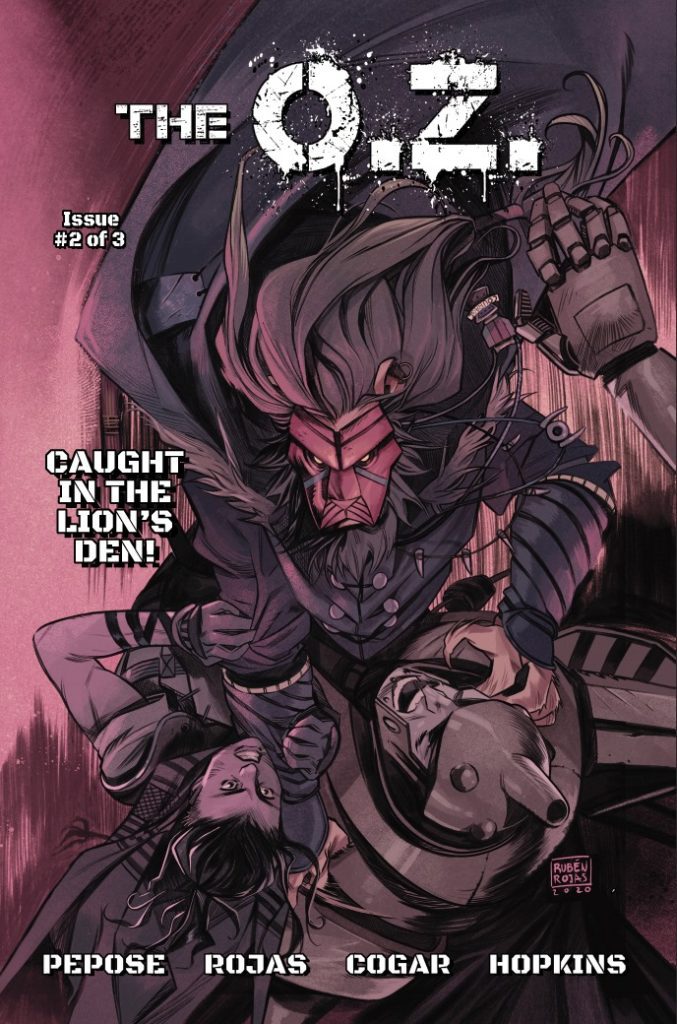 MFR: Are you and your collaborators going after a different tone with this issue compared to the first? Are you looking to make it darker, or scarier, anything like that?

Pepose: I’d say we’re aiming for more intensity for this second installment, for sure. The first issue was all about setting up Dorothy and the world around her, but now that we’ve wrapped up our exposition, we’re able to really put the pedal to the metal with our action. Dorothy scored some victories in our previous issue, but I wouldn’t count on her winning streak lasting forever — she’s going to sustain some losses in this issue that are going to really keep her on the backfoot. But when you’re as desperate for redemption as Dorothy is, a good offense might be the best defense…

MFR: What did you learn from your first Kickstarter that you’re carrying into your second?

Pepose: Getting a sense of scale. When I started my last Kickstarter, I had no idea we would fund as quickly as we did, and the rest of the campaign was me coming up with stretch goals on the fly to keep our readers invested and to bring new backers to the scene. While I’m not trying to bring any expectations to the table this go-round — after all, there’s a pandemic going on — we’ve been hard at work to prepare ourselves for good news as well as bad. If you liked any of our stickers, enamel pins, or prints from our last campaign, you’ll want to tell your friends to back and share our campaign.

MFR: Now that you’ve had experience with both Kickstarter and traditional publishers, would you guide up-and-coming creators to pursue one over the other to publish their first work?

Pepose: I don’t think there’s necessarily a wrong answer here — there are pros and cons for both approaches, but I think that it’s mainly what speaks to a creator more. Working with a publisher means you’ll get more infrastructure behind you — particularly with printing and distribution — but the finances will be much less lucrative, because you have to cut in your publisher, distributor, and retailers.

Conversely, if you do Kickstarter, you’ll be learning everything from the ground up. But without having to cut in other parties, you’ll likely make it back into the black faster… it just might take a little longer to build up a bigger readership if you don’t have any ties to the Direct Market. Honestly, I see the Direct Market and crowdfunding to be two sides of the same pendulum, the same way that people look at creator-owned books versus licensed books. It ultimately doesn’t matter which one you start out with, because you’ll eventually want to be doing all of it. 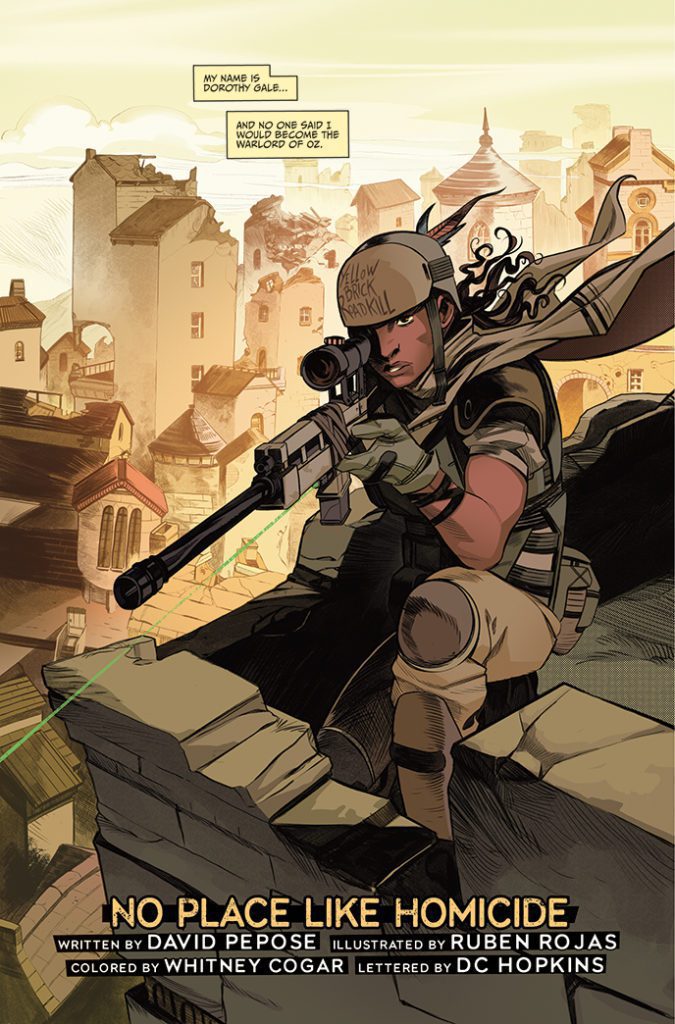 MFR: Do you have any advice for writers in regards to overcoming creative block? Asking for a friend (who is me).

Pepose: For creative block, I usually have three recommendations. The first is to skip whatever scenes are giving you hassle, and just write the scenes you’re interested in — it’s much less daunting to write out of order, because you won’t have the blank page staring at you. Alternatively, you can switch gears to writing something else, just to get the gears turning — it doesn’t even have to be an assignment, it can be a conversation between characters, or even fan fiction. Lastly, though, is just unplugging — sometimes it’s watching a good movie, or listening to some music, or going out for a walk, or taking a nap. If you can’t figure out how to change the writing, changing your location or mindset can be just as helpful.

MFR: Who of The O.Z. cast has been your favorite to write so far, and why?

Pepose: Dorothy is probably the cop-out answer, since her voice really anchors the entire series — I can’t help it, she’s really a spiritual cousin to Detective Locke from my breakout series Spencer & Locke, so it’s hard for me not to love her. But beyond Dorothy, I think it’s a tossup between Toto and Jack Pumpkinhead. Toto is just the funniest way to deliver exposition in a book like this, but his role also got expanded in honor of our terrier Holly, who passed away just before the pandemic shutdowns. Jack Pumpkinhead, meanwhile, reminds me a lot of the comics version of Taskmaster — he’s just a blue-collar mercenary with a sense of humor and a job to do. Even before artwork started coming in, Jack’s lines always popped off the pages in my scripts, so he’s been a lot of fun to tackle.

MFR: What have you been reading/watching lately that’s helped fuel your creative juices?

Pepose: Tons of stuff lately. I’ve been on an ’80s sci-fi kick lately, with Terminator, Robocop, Predator, Total Recall… I saw James Gunn’s Suicide Squad recently, and the stellar team dynamics on that movie have been lingering with me for the past few days. When I want to switch gears, I’ll pop in something from Will Ferrell or Seth Rogen, who I think each have very fine-tuned voices for their work.

For TV, I’ve been catching up on Motherland: Fort Salem and Ted Lasso. On the comics side, I’ve been reading anything that Hickman and Ewing are doing — they are so next-level, it’s both inspiring and infuriating. James Tynion’s been doing some super-cool stuff lately, too, between the experimentation of Department of Truth, the wild structure of Nice House on the Lake, and the sheer additive streak of his Batman run. I’ve also really been digging Mark Russell’s Fantastic Four: Life Story, and Ram V’s Many Deaths of Laila Starr is just a masterpiece and a half.

But beyond that, honestly, I’ve been going back and reading the ’90s-era Spawn, Spider-Man, and X-Men, just to remind myself of why I fell in love with this industry in the first place — it’s so easy to see the work you have in front of you, that you don’t appreciate just how far you’ve come. I’ve been really lucky to have books like The O.Z. succeed, and it’s nice to pay homage to the trailblazers who helped get us there.

Thanks as always to David Pepose. You can check out THE O.Z. #1-2 – A Fantasy Classic Reimagined on Kickstarter right here.