Award-winning composer Miles Hankins has created music for some of Hollywood’s biggest hits including A Quiet Place and Marvel’s Fantastic Four. He was recently nominated for a Sports Emmy for Best Music Direction on HBO’s documentary film Being Serena. His latest work appears in Long Shot the romantic-comedy starring Seth Rogen and Charlize Theron as an unlikely pair that finds love amidst American politics.

Long Shot is the story of Charlotte Field (Theron), the U.S. Secretary of State who decides to run for President. Rogen plays Fred Flarsky, a suddenly unemployed journalist. Long ago, Charlotte was Fred’s babysitter, and the pair recognize each other at a fundraiser. Following that night, Charlotte hires Fred as her speechwriter. From there on, love and wackiness ensue aplenty.

Miles was raised by artist parents, but, “None of them were particularly musical.” The composer is “…not quite sure where I got the bug.”

Early on, Miles sang in the choir and took violin lessons, which he credits as the start of his love for making music. “… that stuff all kind of started my curiosity in music.”

At nine years old, “We got a piano …” Miles took lessons. As he got older, the would-be composer “… studied jazz. I studied classical music. I also studied composition and music theory.”

Soon, Miles’ father presented the young musician with new tools made possible by technology. “My father bought me my first MIDI console and digital computer sequencer.” Today, that sort of tech is as common in film scoring as a microphone.

Film composers come from a broad spectrum of backgrounds. Many start off wanting to be rock stars who discover a skill at composition. For Miles, there was only one goal: “The first job I ever wanted to have was a film composer.”

Miles reflects. “I think the first time I said I wanted to be anything was ‘I want to write music for movies.’”

“Long before I had any idea what was going in those scores compositionally, I was moved by the music. The one specific one I remember was Lawrence of Arabia.”

Miles declares, “It’s one of my favorite film scores.”

He continues taking us through his musical evolution. “I think from that moment on I was a student of film. I used to make home movies and try to score them myself on my MIDI keyboard. Or I would try to take existing music and edit it to work for the movie I was making.”

“It was always this duality of film and music evolving at the same time for me.”

Rogen and Theron are big stars, and the premiere for Long Shot was equally big. “Boyz II Men sang live at the premiere.”

Miles adds, “It was a great time. The audience really enjoyed it.”

Long Shot is a rom-com, but something more. “It’s a movie that has a great balance of so many ingredients. It’s funny, it’s touching, there’s romance.”

When it came to the score, Miles and co-composer Marco Beltrami, “had a lot of fun…About half the music is songs and half is our score. It’s a pretty good balance.”

Long Shot is more diverse than the typical romantic comedy. “The music took a few different shapes. There’s a side to this movie that’s kind of an intimate, sweet love story, so we wrote a very simple theme that we played on acoustic guitar. Then there’s this whole other side to the story that’s about American politics and sort of traditional, cinematically, that we touched on. It allowed us to go big and broad, a lot of orchestral music, we had a 70-piece orchestra and some very beautiful, sweeping melodies, very patriotic. Then there’s also this hilarious sort of action scenes where we did more of an electronic hybrid score.”

About the process for Long Shot: “When you’re scoring a romantic comedy, you don’t think that you’re going to flex all these muscles. But Long Shot has those extra dimensions.” 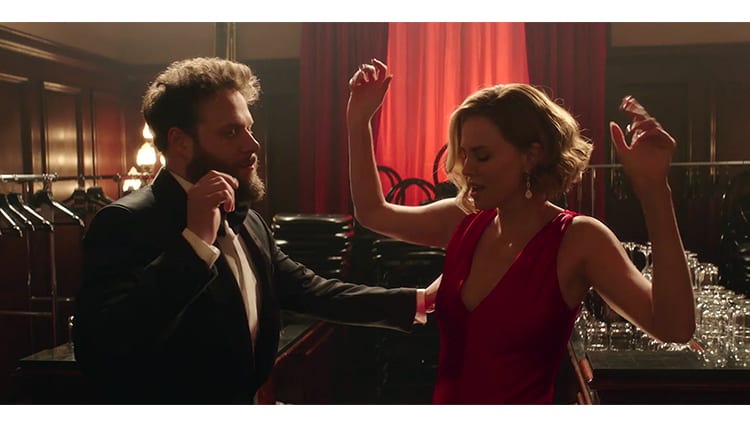 As a sucker for a good b-movie, it brought me joy to see a few on Miles’ filmography, including Monster Wolf. “When I first moved to L.A. I did a bunch of these b-movies for the SyFy Channel.” Indeed, Monster Wolf premiered as part of the network’s 31 Days of Halloween in 2010.

In the age of content, there are still cult classics that connect with people. “I did about five of those movies in a year. I still get emails from people telling me how much they love the scores. I think it’s so great those movies found an audience.”

About making scores for films like Monster Wolf or House of Bones: “There’s a lot of restrictions mostly because there’s no budget on a film like that.”

“I also worked on A Quiet Place with Marco, and the concept for that score is totally different from something like Long Shot or Being Serena.”

So, how does Miles begin the process of connecting with the material? “It comes down to what the film requires, which has a lot to do with the director’s vision.”

Miles jokingly adds, “I wish I could say that it gets easier the more you do it, but every project is almost like a completely new frontier. It’s always a challenge of trying to figure out this new puzzle.”

As a bit of advice for the up-and-coming composers, Miles thinks, “Endurance,” is key. “It can be a long process, and there are a lot of changes along the way. The edits can change so many times, and every time you have to re-conceptualize what you’ve done.”

Miles’ musical DNA, the subconscious flow of inspiration throughout his life, begins with jazz. “Most of my early musical heroes were all the great jazz artists like John Coltrane, Thelonious Monk, Miles Davis, and Bill Evans. Later, I fell in love with a lot of European and Russian composers.”

When it comes to film, Miles says, “… John Williams remains as one of the finest examples of what music can do in terms of enhancing the storytelling in a film. Everyone knows him for his iconic pieces, but what often gets overlooked is what he does under a dialogue scene or in an intimate, quiet moment. It’s astonishing.”

Miles’ road to the Long Shot intersected with that of John Williams. “I was fortunate to work with John. When I first came to L.A. I worked as a score reader for the Los Angeles Philharmonic, and so I got to work with him on some of his Hollywood Bowl concerts.”

What was that like? “I was a geek in a candy store.”

Miles is working on something new but, “I can’t talk about it, but it’s coming out later this year, and it’s a wild and crazy project.” He adds, “I’m in talks with HBO about another series. A lot of stuff in the pipeline.”

There’s a lot of content to score and for Miles, that means, “I haven’t had a day off in like three years so if I can squeeze a little vacation time in that’s not a bad thing.”

Thanks to Miles Hankins and Impact24 PR for making this interview possible.