To The Stars is a new film from director Martha Stephens and starring Malin Akerman that’s about a withdrawn farmer’s daughter who forges an intimate friendship with a reckless new girl in 1960s Oklahoma and designing the array of costumes from a bygone era is costume designer Kiersten Hargroder.

Kiersten Hargroder took some time out to speak to PopAxiom about her work on Supergirl, You on Netflix, and To The Stars.

Kiersten’s been making costumes for more than 10 years but where did it all begin? “I definitely grew up sewing and experimenting and cutting things up and putting them together in new ways.”

Being a costume designer still wasn’t on the radar but Kiersten “… Studied apparel design in college. I wasn’t really aware of the costume design route at the time.”

Early on, the super-stylist “… was working as a photographer and it just sort of started to meld together. The images, making things look good on camera.”

The superhero genre has seen it’s uglier days. But the modern comic book character looks great today. What changed? “Different types of fabrics and new technology. There’s so much we can do now.”

The versatility of technology opens the door to storytelling “It’s being able to shift sort of the little things that really add up to be that character.”

The amount of pre-production makes a difference too “We look at everything and see how costumes shift and move.”

Kiersten is responsible for many of the looks on Supergirl; specifically, she was responsible for bringing the iconic Superman suit to life. No pressure “You want to take into consideration the legacy of the character. I grew up with Christopher Reeve, and it’s an iconic character and look.”

However, this isn’t a show seeking to recreate a nostalgic look “…it was also important making it look right for our show. We kept the color family and merged it with the look of Supergirl.” 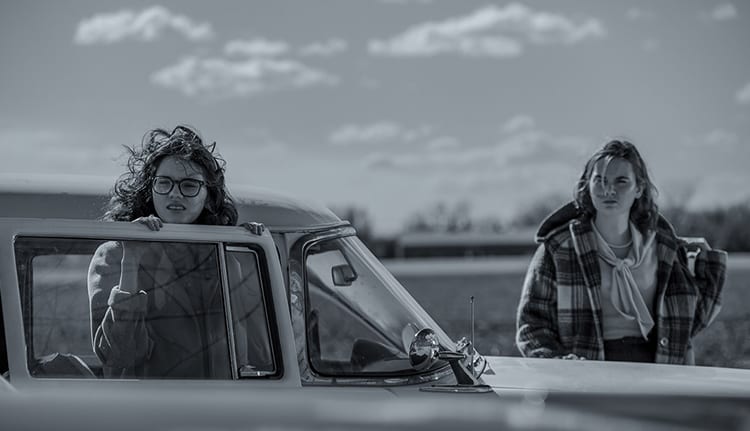 About To The Stars

From superheroes to the star. Kiersten comments on working on Supergirl versus To The Stars “Obviously, it’s a different kind of story. But in a lot of ways, it’s similar.”

Kiersten says “It’s about the coming of age of a girl. Supergirl is the same in that regard. But To The Stars, and the character of Iris, there’s a relate-ability to it. That age, junior high or trying to figure out yourself.”

In both cases, Kiersten’s goal is the same “It’s trying to do the story justice.”

The thought process for To The Stars involved getting into the character’s head “In To The Stars, we felt the main character doesn’t have a lot of money. So she’s finding ways to hide or express herself.”

Kiersten goes on to explain the connection between the character and the clothes “Her sleeves are long because she can curl up into it and sort of hide.”

Being A Costume Designer

For Kiersten, being a costume designer includes something essential “For me, it’s all additive growth, and you continue to learn and bring that to the next project.

It’s a balance of things “Of course, the end product matters. But the doing of the work and improving upon it every time and bringing new experience and gaining new experience. I love that.”

What sort of other details in clothing can bring out the psychology of the character? “It can be details like ‘this guy likes wearing a white undershirt all the time because he’s OCD and likes having this sort of piece between his other shirt and the outer world. Sort of like mental armor.’”

Kiersten continues to explain what many viewers may only experience subconsciously “It’s … almost unnoticeable and maybe you don’t put much meaning to it as a viewer, but it’s underlying in the character and starts to have some consistency with their behavior.”

On Supergirl, there was a conscious effort to affect the viewer “When I was on Supergirl, I tried not to have red anywhere on the show. I wanted the power of her cape to be subconsciously important.”

Kiersten shares her thoughts on the people in her industry who influence her as a creative “Oh goodness, there are so many costume designers doing amazing, beautiful work. I would say Colleen Atwood is someone I admired before getting into the business and getting to work with her was unbelievable. Her attention to detail really taught me a lot.”

Kiersten adds a few more to the impromptu listicle “Mary Zophres who does all the Coen Brother movies is great. Jenny Eagen who did Maniac and so many amazing movies are incredible. Trish Summerville who worked on Hunger Games, I’m in awe of her talent.”

The costume designer shares a little love with someone close to her “A good friend of mine is Jennifer Starzyk who does the Mindhunter series, she’s simply amazing.”

What’s next? “I’m working with the Berlanti Group on a TV show called You. The first season is on Netflix, and I’m working on season two. We start shooting soon.”

To The Stars made its world premiere at Sundance on January 25th, 2019
and hits theaters soon!

Thanks to Kiersten Hargroder and Impact24 PR for
making this interview possible.