Thomas Parish is a German-born composer living in Los Angeles and making music for TV, film, and video games including the new moody, puzzle game Iris.Fall. The composer spoke with PopAxiom about making music for the strange, surreal game alongside composer Edwin Wendler, and the musical contraption they invented to get the job done.

Where did the road to becoming a composer start? “Wow, that’s really the top.”

Who doesn’t love an origin story? Thomas begins “I was kind of forced into recorder lessons at a young age. But I took a liking to it. I got a [music] bug when I heard the oboe. That’s when I started to take music serious, at around 11 or 12.”

The connection to music grew “I got into playing one instrument and that lead to other instruments and eventually the piano.”

Like falling in love, that one instrument changed everything ”Once I played the piano I started improvising and really trying to find out what fascinated me about music.”

Thomas experimented “I started to figure things out and making things. I think that’s when composing started.”

Meanwhile at school, the young composer-to-be “… studied oboe as an instrument but also music theory.”

Slowly but surely “The composing and theory part kind of took over and I couldn’t just play one instrument anymore.”

Like a superhero discovering his sonic abilities, Thomas also had a calling “At the same time I had this love for film music. My background is classical, but I always had this interest in music for storytelling.”

Crossing the great pond that is the Atlantic “I went to Boston and Berklee and explored film music and jazz.” The journey continued to the mystical lands known as Los Angeles where Thomas “… ended up … doing a graduate degree at USC.” 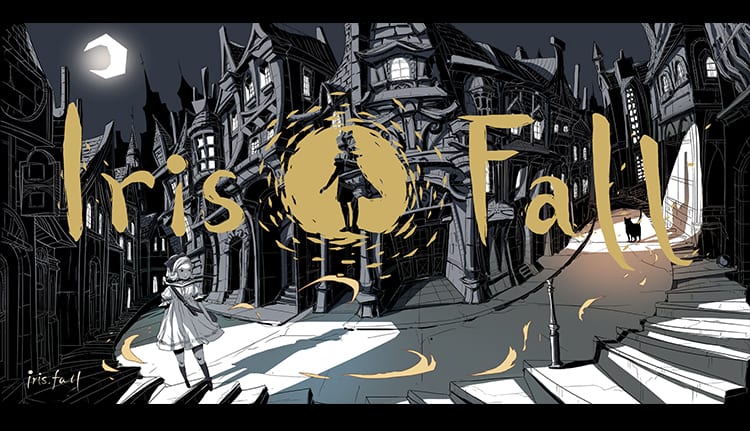 Thomas began working on films like The Iceman, Whiteout, and Legion as an orchestrator. Other films as a musician and now as a composer for TV series like Doc Martin. Along the way came video game projects like Resident Evil 6 (2012). And now, the composer scored Iris.Fall, a moody, puzzle video game created by NEXT Studio. “

Using videos, stills, and scenes Thomas created the sound-world for Iris.Fall “We had a lot of discussion about the soundtrack.”

And where did those discussions and Thomas’ creativity lead? “We wanted to come up with something that was very idiosyncratic and unique.” Play the game for just a minute, and you’ll see how accurately they hit that nail on the head.

Iris.Fall takes place in a strange, surreal world. The creators of the game “… Liked experimental sounds and these ‘orchestrions’ and player-pianos, toy pianos, or show-tunes. We wanted to bring this musty theater full of nostalgia back to life. These old tunes and weird instruments.”

The score evolved to service the story “Then we started to get away from ‘clean’ sounds. There might be some notes out of tune or scratchy.”

Typically, a score is made from samples or new orchestrations. However, the sounds they wanted posed a problem “ … a lot of these instruments you can’t even find a sample for. Recording them is hard. Where do you find them and who knows how to play them?”

The solution? “We built our own weird instrument. I have a friend who is a musician and also an inventor. In the end, we built this … thing.” Thomas describes a sustain pedal, sitar, dog hands, warped violins and more. We’ll just go with ‘thing.’

The new thing was exciting “So, it was cool, we had this new instrument of sorts that we invented …” It solved one problem but created a new one “… we had to learn how to play it which was a bit annoying.”

Creating this ‘ugly’ music might sound easy, but it’s a great challenge “You want to bring the music out of balance to suit the mood but also not to a point where you disturb the melody.”

The music for Iris.Fall, like the game itself, was seeking a balance between being fun and challenging “Even when it’s a simple melody there’s something underneath the surface that makes you want to go on.”

Your Dog Is An Alien?

Iris.Fall is available on all game platforms such as the XBOX, PS4, and PC. Before we let Thomas go, I have to talk about a curious item on his IMDB page called My Dog Is An Alien. Before answering, Thomas laughs a bit “It’s a little short film. You know, when you don’t have work, and you’re coming out of school, one thing to do is short films.”

Work is work, right? But there’s more to it “And you never know. Many aspects of this industry are a lottery. You never know what happens, this little guy making a short film could end up making a Marvel film five years later.”

In the end, working on the alien dog is a win-win “It provides experience and some money in the pocket too.”

For a moment, we talk about the way composers do things today versus how it was done before and one name comes up “John Williams is really one of the few people who really does a lot by himself. Most big composers have huge teams. John Williams is so old-school. His sketches are so detailed. He has help of course, but he’s part of a dying breed.”

The conversation spiral shifts to the ubiquitous use of technology. Computers have become part of nearly every industry and with good reason “It’s so much faster.”

But is that a good or a bad thing? The old man screaming on a lawn says it’s bad. For Thomas “There’s some beauty to handwriting and scoring on paper.” But like energy, which is never destroyed and only changes form, so does the way we do things. The paper might be gone, but the music thrives “Absolutely.”

What composers working today does Thomas admire? “Alberto Iglesias or [Alexandre] Desplat. What I like about them is they’re subtle.”

Thomas is working on other games such as Moonlight Blade and Honor of Kings. Is there anything else in the works? Unsure of whether or not he’s legally allowed to mention specifics, we end on a bit of a mystery “I’m working on a new game for NEXT, another interesting one. And also a new Tencent Studios game.”

Thanks to Thomas Parisch and Impact24 PR for making this interview possible.