The Cool Kids is an old-school, multi-camera sitcom on FOX and co-created by Charlie Day (It’s Always Sunny In Philadelphia) about four seniors living at a retirement home who act more like high schoolers than wizened elder folk and lacing the hilarity with the right music is composer, Cormac Bluestone.

The Cool Kids stars comedy legends David Alan Grier (The Big Sick), Martin Mull (A Futile and Stupid Gesture), Leslie Jordan (American Horror Story: Roanoke), and Vicki Lawrence (Hollywood Squares) who all live at Shady Meadows Retirement Community. Grier is Hank Henderson, the de facto leader of a group of four, however, when one of their clique passes on, a new member fills the slot whether Hank likes it or not. That new member is Margaret Flynn played by Vicki Lawrence who is a firebrand of a woman that ruffles feathers but is clearly meant to be part of this quartet.

PopAxiom had the chance to talk to Cormac Bluestone and pick his brain about making music for The Cool Kids, It’s Always Sunny In Philadelphia and the power of workflow.

Growing Up With Music

Cormac started playing the violin at three, switched to the piano at twelve, then guitar all the way through college “As long as I can remember I’ve been playing music.”

Movies are ubiquitous “I always had a love for music in film and television, so I was fortunate to end up in a place I wanted to be.”

Growing up in the 80s Cormac was exposed to electronic music early on by a sixth-grade teacher “I was writing music in DOS.” Cormac adds “I love tech.”

Cormac is a composer but don’t be fooled, perusing his IMDB will reveal credits as an actor, producer, and cinematographer “I really wanted to be a part of this industry somehow. But editing, camera work, all that stuff, it all kind of adds up to the same idea in today’s digital age and the way things work.” 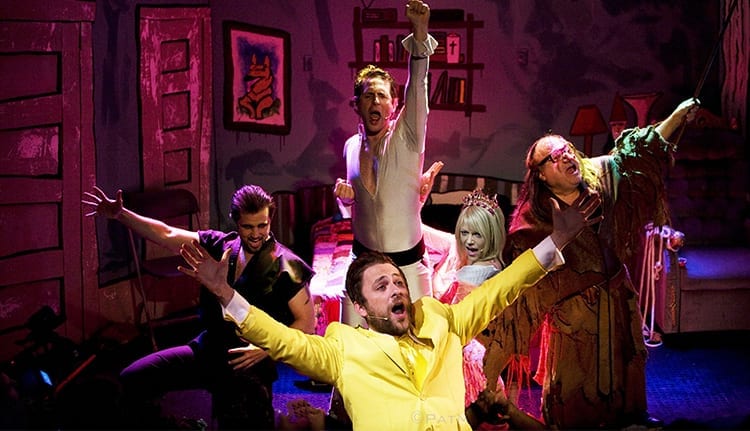 Cormac’s journey to The Cool Kids started with a beloved FX comedy “I have to say my first real break was It’s Always Sunny In Philadelphia and working on ‘The Nightman Cometh.’”

Cormac continues “That was my first real big TV job. I had been writing musical short one-acts for years in New York City. Me and my friends who had a theatre company would perform them in bars.”

The composer continues “The more we did, the more I thought, ‘how do we make a bigger show?’” And then came a move out west and one important Day “In L.A., we staged the ‘best-of-the-best’ and Charlie Day came to see it.”

What was Cormac’s first reaction to reading the script for The Cool Kids? “I loved it. I grew up in the 80s with multi-cam sitcoms, so I was so excited to get to work on a show like that. And then, you have the cast, plus guests like Jamie Farr (MASH).”

The Cool Kids is co-created by Charlie Day who shows up in a cameo in the pilot. Was it Cormac’s connection to Day that got him the gig? “Absolutely.”

Time is a significant factor in life, and when it comes to network sitcoms, there is a wildly varying amount of it “The turnaround really depends. Sometimes I get as long as a week to do an episode and sometimes it’s under 24 hours.”

But Cormac admits “Personally, I welcome the short deadlines. I’m about workflow.”

From the onset “Charlie and Paul Fruchbom who created the show, they were very clear on what they wanted. I think that’s what our audience has responded to. They know what they are going to get, but also know they’re going to be surprised.”

You cannot do an interview with Cormac and ignore an interesting list on his credits — Assassin’s Creed: The Musical “That was such a gem. A friend of mine was working for the YouTube channel Machinima. My friend asked me if I could do some music for this for the release of the game. The lyrics were perfect. So I made a couple tracks. The director they hired turned out to be an old friend of mine. We had some amazing singers.”

About making the short film, Cormac says, “It was an incredible experience.”

Of course, talk of video games begs the question, is Cormac a gamer? “I’ve played every Halo, every Madden. But I don’t get a lot of time to play these days.”

For Cormac, there is one crucial aspect to making music for him “I think you gotta start with a workflow. How is this going to get done? How do we do it in a way that’s comfortable?”

A part of the score-making workflow often includes temp tracks “My point of view on temp tracks is that I’ve been lucky. Some of the editors and producers I work with pick great temps.”

Cormac also thinks “But that’s a challenge too because if you have a great temp, then you have to ask ‘what can I bring to this?’”

However, he doesn’t see this as a negative “It’s a fun part of figuring that out. What is it about this piece of music that is appealing? And then how can I deliver something as good or better?”

Continuing the talk on temp tracks, there’s a reality to making movies and TV “It’s hard to edit without music.” So temp tracks are necessary, but not necessarily evil as they are sometimes portrayed.

For Cormac “The only real negative is if a project sits too long and people fall in love with a temp. But TV moves so fast these days it’s hard for that to happen.”

In regards to his current show “The Cool Kids, we did 22 episodes this season, and the temp tracks at this point are all my music from before.”

Who would you say is part of your musical DNA? “Oh, man.”

Cormac begins “I have to say Mark Mothersbaugh (Thor: Ragnarok).”

Cormac delves deeper into his first answer “[Mothersbaugh] Came from one of the biggest 80s acts — Devo. His versatility. But when I saw Rushmore in theaters, his instrumentation on it was so different than a big score, but it feels like a big score and punctuates the comedy. I learned so much about comedy.”

It might seem a bit common for musical artists to turn to composing since people like Trent Reznor, Thom Yorke, and Johnny Greenwood are making music for films and television. But in the 70s and 80s, it was rare, but another of Cormac’s picks had a similar start “One of my true favorite composers is Danny Elfman. He was part of [70s/80s new wave band] Oingo Boingo. I don’t even think he wanted to be a composer, but he got to work with Tim Burton.” And the rest is history.

More of the musical DNA comes together “Of course, various other artists. I grew up listening to Van Halen, John Williams … Alan Silvestri. It’s a real mixed bag.”

Cormac adds one more name to his list “Mike Post was someone I loved growing up, and he produced Van Halen’s Van Halen 3. It’s a great album, and you can hear what Post brings and how it marries what Van Halen does, and Gary Cherone is a fantastic singer.”

Cormac’s work is not done “We’re finishing up The Cool Kids. We’re in the very last stages.” Keep an ear out for more from the composer, because The Cormac Cometh, ahh-ah-ahhhhh!

Thanks to Cormac Bluestone and Impact24 PR for making this interview possible.