Orange is the New Black star Taylor Schilling is Sarah, the mother of a possibly possessed or possibly just psychotically crazy pre-teen, Miles (Jackson Robert Scott) in the horror film The Prodigy and putting clothes on the fear is costume designer Catherine Ashton.

Catherine is an industry vet with films and television projects such as the recent Flatliners reboot and the CW’s Beauty and the Beast TV show under her belt. 2019 is a busy year for Catherine whose work will appear in a TV series and two films, including The Prodigy which comes out on Friday (February 8th, 2019).

Below is PopAxiom’s interview with Catherine Ashton where we talk about Catherine’s career and how to make an adorable kid terrifying. 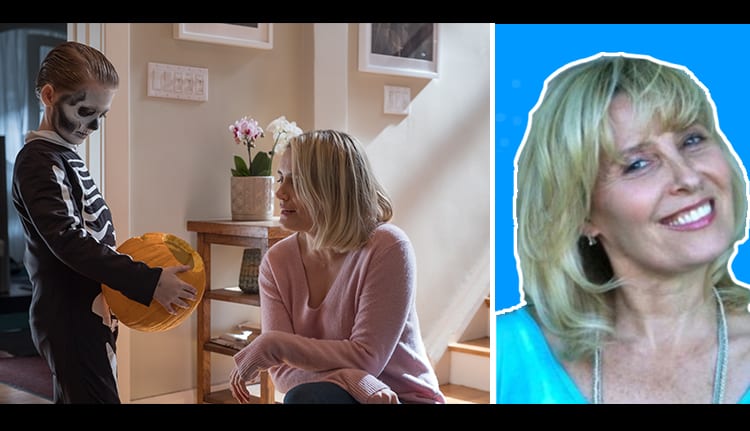 Though not yet scientifically verified, creating clothing is in Catherine’s DNA “My mother was an incredible seamstress. I would watch her build clothing. Every year she would go to a big Gala, and she would start in October building a gown from scratch.”

A young Catherine was like a nice version of Sid from Toy Story “I would watch my mother and translate what she did to my poor Barbies. I would take the scraps and put them together myself.”

The love-affair with clothing carried her through life where in school, “… we’d play newscasters, and I’d report on fashion,” and continued on into college where Catherine studied “… journalism to report on fashion.”

A fan of films, Catherine learned of an opportunity and made the most of it “… A new video company was opening up in Canada … someone asked me ‘What can you do?’ and I said ‘hair, makeup, and wardrobe!’”

For Catherine’s costume designing career “That’s where it started. I kept going and haven’t looked back.”

Of the genre, Catherine says “I love psychological thrillers,” and continues to tells us about her experience of working on The Prodigy, “… I read the script I wanted to work on the film. I could feel The Omen in it. When I met Nicholas [McCarthy, director] … we had the same sense about how the movie should play out.”

The bottom line of every project is the same “It’s all about the character and clothing and having that be a thread for who that person is.”

There’s a creative vision, and then there’s the reality of a given day and time which poses challenges “We were shooting in Toronto … in February, but all the stores were showing summer clothes. We were chasing the last trucks leaving with the winter clothes. Tracking clothes throughout the outlets.”

The Prodigy stars Jackson Robert Scott as Miles the titular “prodigy,” a super-smart young boy who may or may not be evil “I wanted Jack to appear very innocent. I love those little onesies that kids wear. Jack was a little bit above that age.”

Being out of the age range is just part of the costume designing game “… I found a onesie I wanted to so bad, but it wasn’t in his size, so we ended up buying a few and building a new one for him out of the fabric.”

In the trailer, Jack wears a skeleton outfit with facepaint that’s already iconic even before the movie’s release “The skeleton outfit is an actual Halloween costume. We had a short prep time, so we didn’t have time to build it. I scoured the Internet to find the right one. But Jack was in-between sizes, and it needed some work.”

Catherine’s final word on The Prodigy “It was an amazing collaboration. I kept wanting to bring more and more to the table. It was a great ride. It’s a great film.”

Catherine’s career is marked by films and television series across all genres. Is there a type of project she finds more or less challenging? “It’s any genre to me. It’s all about building the character. I love period. I love contemporary. There are challenges to both. It’s exciting to me because it’s about the character.”

Shifting the conversation to influences and inspiration, Catherine shares a show that fuels her to this day “I was always really influenced by fashion as a whole. As a child, I would watch the Carol Burnett Show and all the characters. I’m a strong character designer, and that’s where it comes from.”

On the cinematic side of things “… Peter Sellers’ The Party. The characters were in such fabulous costumes.”

As for a contemporary, she admires “… the Game of Thrones designer, Michele Clapton.”

But Catherine admits she could likely write a long list of great working creatives “I’m a television and film junkie so when I fall in love with a show I love everyone on that show.”

The admitted junkie adds “When I’m not working I am watching everything. And I do it to learn. You know, my husband is a lighting director. So, we will sit down and binge TV series, and we’ll watch movies. It’s always this conversation and a learning experience. There’s so much wonderful work out there.”

The Prodigy is soon to terrify moviegoers all over. So, for Catherine, what’s next? “I designed a series called In The Dark. It’s out on CW in March. Another feature I worked on called Life In A Year will be released this year.”

Thanks to Catherine Ashton and Impact24 PR for making this interview possible.