Holiday Flashback: Larfleeze and the Truth About Santa

Santa Claus and the Christmas season are no strangers to the comic medium. Every year come the holiday season, there are a slew of Christmas one-shots and specials involving everyone’s favorite heroes in heartwarming holiday tales. One of the best and most memorable of these holiday specials is the Larfleeze Christmas Special one-shot by Geoff Johns and Brett Booth. 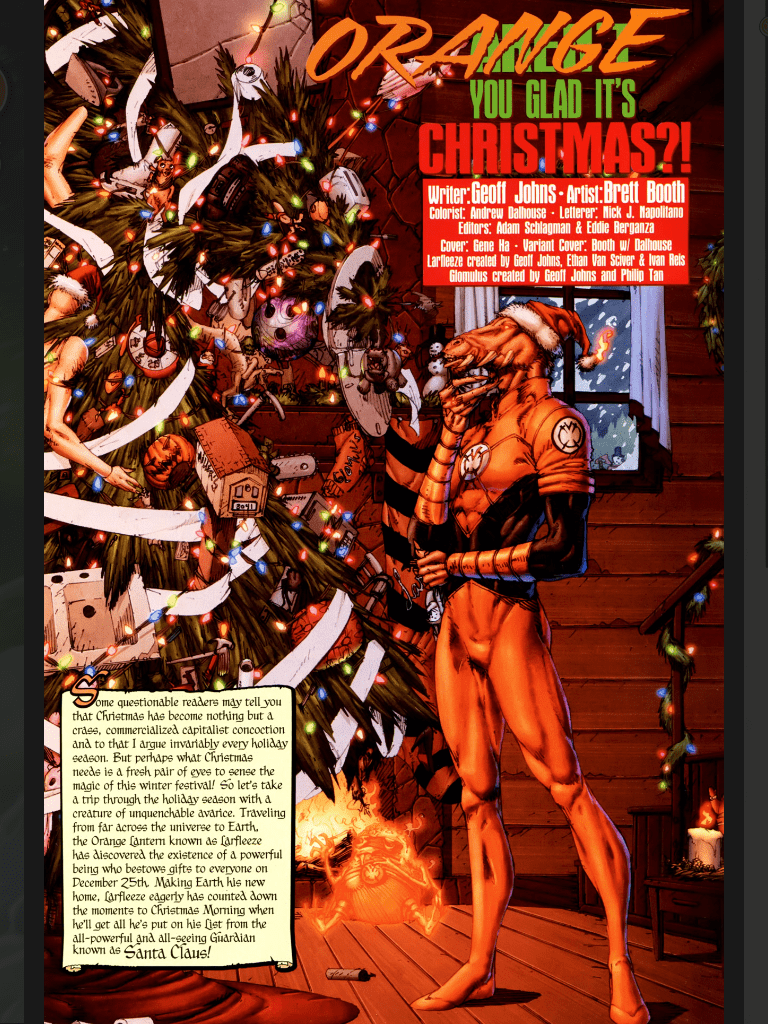 Johns’ Green Lantern is a galaxy-spanning epic made of tense battles and compelling character drama. Once each of the new Lantern Corps is introduced, they are all fleshed out so well that none of the main Corps leaders – no, not even Sinestro – are considered truly villainous. Larfleeze is kept a bit of a mystery as a character by comparison, but is also the only one made a victim of his own power. The orange light latches onto a being and gives them its power, at the price of being cursed with everlasting gluttony. This absolves him of any serious evil and easily makes him a sympathetic character to the audience. Which also helps him be so damn fun to read. Nearly every page the character is on is given his cartoonish desire for every random thing he sets his eyes on. He doesn’t care about the Lantern struggle against the Blackest Night or quests to protect the galaxy. He sure would like a toaster oven though. Whatever that is.

The “Larfleeze Christmas Special” comes about after the Orange Lantern keeper makes his home on Earth. He does so after hearing about our planet’s consumerist love of getting stuff. He and Green Lantern Hal Jordan manage to arrange a tenuous agreement so Larfleeze can stay in the massive junkpile of items he’s collected. Things seem fine. Then the greedy alien learns about Christmas – and a certain red-clad jolly figure who brings gifts on a great sled. Larfleeze’s excitement about such a prospect is snuffed out when he looks under his well-decorated tree (seriously, he got and decorated a Christmas tree) to find nothing from his roughly thirty-mile-long list. Furious, he flies out to hunt down Santa for his betrayal. After terrorizing a shopping mall Santa and a small-town Christmas parade, Hal Jordan catches him and tells him the truth about the holiday. 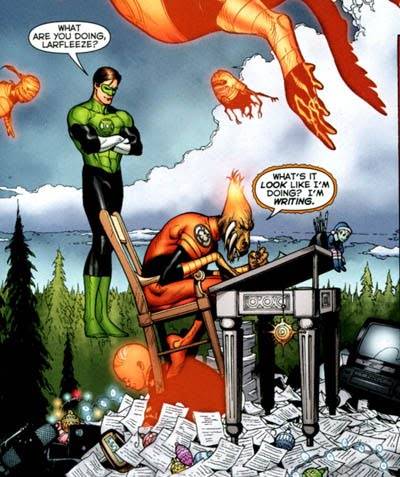 What makes this special so endearing is how it takes advantage of the tone Larfleeze brings as a character. His obsession collides with the Christmas spirit in a visual manner that will immediately put a smile on your face. Brett Booth’s artistic renditions of Larfleeze’s snazzy decor and how he dons his gay apparel are immensely entertaining. Even better are Johns’ clever fourth wall breaks, especially his now-infamous Holiday Cookie Recipe. Johns mixes the Orange Lantern’s humorous greed with the meaning of the holidays to ultimately deliver an emotional ending to the issue. It reminds the reader that Larfleeze is, after all, a tragic character who has been through more than most would give him credit for.

Geoff Johns and Brett Booth’s “Larfleeze Christmas Special” one-shot is a heartfelt and hilarious holiday issue that’s sure to make even the most jaded comics fan smile. If you’re needing a bit of a Christmas-time pick-me-up, give it a read from a site like Comixology or in the back issues of your local comic shop.