GOING TO THE CHAPEL: How To Make A Dysfunctional Family Sitcom

Going To The Chapel by David Pepose and company is a sitcom that hits notes similar to The Simpsons. Unlike that show and many that follow in its footsteps after more than a decade, Pepose’s series retains its integrity. But what is it about Going To The Chapel that makes it comparable to animated sitcoms; bratty kids and dumb man-children of dads? None, it’s the dysfunctional quirky families revolving around a simple premise.

Why At A Chapel?

A simple premise can have a very compelling story behind it if it’s relatable. In Going To The Chapel‘s case, it’s the lead character Emily Anderson’s trepidation on marital commitment. Because what person doesn’t get cold feet at their wedding? Not only that, but for Emily, it’s worse than dealing with her wealthy but dysfunctional family. Even the hostage situation lead by her ex-boyfriend, Tom can’t compare. This situation can, however, be compared to Simpsons episode “Last Exit To Springfield.”

The premise is Homer Simpson standing up to his boss Mr. Burns. Burns, at this point, disregards his workers’ union for healthcare plans. With Homer’s daughter Lisa needing braces, Homer acts as union president to protest against Burns. Everybody wants to stand up to their boss when the boss does something underhanded in disguise of benevolence. The case being giving up dental plans in exchange for free beer at staff meetings. But it’s a whole other story when the family gets involved even if it’s not entirely benevolent. Homer cares about Lisa, but he hates having to pay for her braces even if Lisa’s cheaper braces involve a hilarious hallucinogenic “Yellow Submarine” sequence.

All sitcoms seem to feature dysfunctional families that reflect in someway people’s lives. While the Anderson family is immensely wealthy, they’ve their own lives and struggles that could warrant their own series. A personal favorite comes from Grandma Harriet, a hedonistic Vietnam War veteran bound to a wheelchair and oxygen tanks. Despite her frail looks, she’s highly resourceful, from using her medical bracelet to call for help in the hostage situation to spiking a piece of cake with Ambien. Not to mention when all’s said and done, Harriet has a deeper side to her — being the one to encourage Emily the most when it comes to living her life the way she wants. 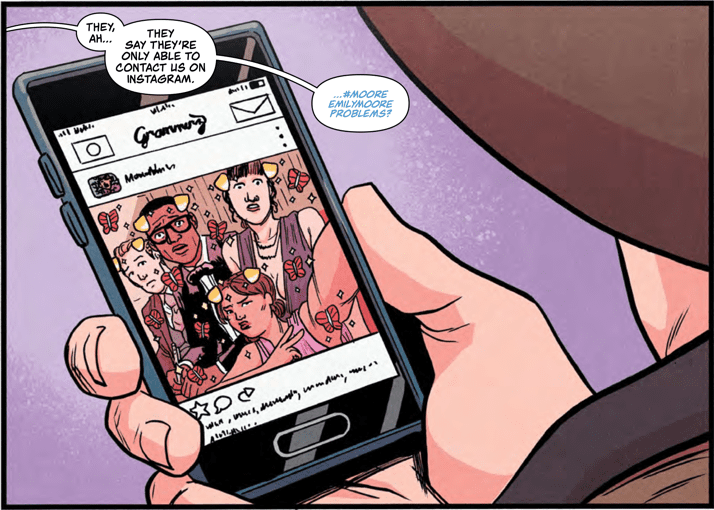 The rest of the Anderson’s steal the spotlight just as often. Emily’s parents epitomize first-world problems with trying to be as extravagant as possible. Her dad wants to have a thousand doves at the wedding while constantly worrying about money. Emily’s cousin(?), Natalie, meanwhile, makes a serious call for help as a way to a means to advertise her Instagram influencer status. Naturally, some straight men need to be in these situations including Emily’s fiance Jesse. That’s not to say he can’t play the funny man with his acts of bravado. Those acts, in turn, help build up his character as well as his relationship with Emily.

A Sistine Chapel For Animated Sitcoms

Probably the best thing about this series is how easily accessible it is for new readers. Any sitcom worth its ratings deserves its episodes to be mostly jumping on points. Because let’s face it, starting a sequential story from the middle is a terrible thing to do. It offsets the flow of the story.

Meanwhile, the middle issues of Going To The Chapel act like a buffer for what’s come before. With a minimal amount of intel yet just the right amount of it, readers get the gist of things without chunky exposition. Sometimes the art by Gavin Guidry, like a partially wrecked wedding cake says more.

Also, due to using panels instead of live-action cameras, the cast and setting can get away with anything. With no huge budgets, the conflicts can be as over the top as they want. The cartoony violence and jokes decorate every page. For that matter, it gives the series a sense of longevity. This allows for creators to develop characters and settings for as long as they want.

Like all good things, they must come to an end. It’s all well and good to stick to a premise and milk it for all its worth, but there will be times those ideas clash with characters. Because jokes are only memorable in comedy series if they help drive the plot. The jokes aren’t meant to be a plot, especially if they distract the audience from what’s at hand — for example, the numerous cutaway gags in Family Guy. In the final issue of Going To The Chapel, the emotional stakes are at their highest when Emily is torn between options. Either become a master thief with Tom or join Jesse in matrimony.

On the side, things are flaring up with Tom’s relationship with Emily coming up with Tom’s Bad Elvis Gang and the town sheriff. While it’s tempting to know what would happen after the final issue, those are stories for another time. Going To The Chapel is Emily’s series, so she’s the one who calls the shots. Who knows maybe if Pepose likes the idea enough, he could create a spin-off around one or more of these characters. It can’t be any worse than The Cleveland Show.