‘Friends From College’ Review: Is A Bumpy Trip Down Memory Lane

Friends From College centers around the lives of six college buddies who are reunited when two of them (Ethan played by Keegan-Michael Key and Lisa played by Cobie Smulders) move back to New York. Their group consists of a trust fund kid named Nick (Nat Faxon), Sam (Anne Parisse), playwright Marianne (Jae Suh Park), and literary agent Max (Fred Savage). They all graduated from Harvard and manage to take every opportunity possible to remind the audience of this. Even though they had slightly grown apart over the last twenty years, this group certainly has some unresolved issues. Ethan and Sam have been having an affair since college which hasn’t ended (even though both are now married). Nick tries to mask his feelings for Lisa by throwing himself at every young lady who saunters his way. Marianne seems to be getting nowhere with her playwriting career and Max is own worst enemy in both his professional and personal life.

Lisa’s storyline involving her desire to get pregnant was some of the best writing and contained the most scintillating on-screen moments in the whole series. As someone who has had friends and has personally tackled the possibility of infertility, Smulders and Key captured the anguish that comes over a couple when faced with the possibility of not having kids. Lisa has to go through a series of crazy involved shots that have to be timed to the second. Each of these shots is extremely painful and towards the end of the sequence when things go wrong, she loses it. Ethan just wants to make her happy and begins to lose it as well. He seems willing to anything to make it right, even offer up sexual favors to random pharmacists.

Billy Eichner is cast as Max’s (Fred Savage) boyfriend and acts as a reality check for everyone in the group. He reminds Max constantly that they are grown ups, Lisa and Ethan are not given any special treatment at his fertility practice, and he won’t put up with any of the group nonsense. In the end, he even ends up serving as a wake-up call for his boyfriend. 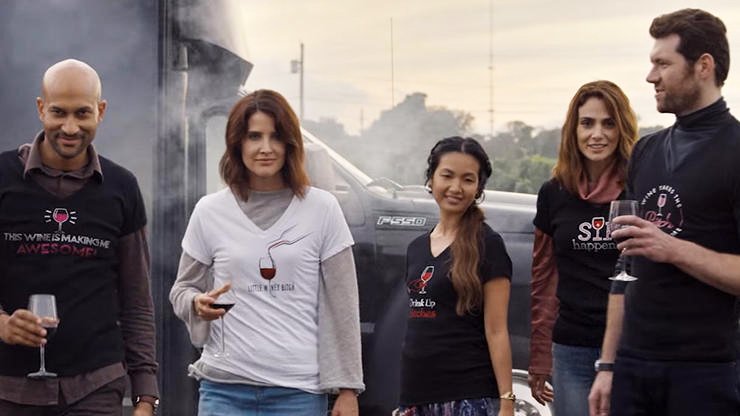 Sam, Max, Marianne, and Nick were written very one dimensionally. While Lisa and Ethan seemed more layered, the rest of the cast seemed to be playing archetypes. Sam is the confused middle aged woman who doesn’t know what she wants. Max is the guy who longs for the past. Nick who loves to avoid dealing with any of his personal feelings. Marianne is just a lost 30 something who doesn’t know what she wants.

While Friends From College is not the strongest release that Netflix has ever had, it does offer up enough entertainment value. They have the show set up in eight 30 minute parts which will make getting through the show extremely efficient. Don’t expect to be blown away like when you first saw GLOW but that doesn’t mean a show like this shouldn’t be on your radar.