The Freedom Fighters have pushed back against Hitler II’s regime since issue one of this series. As they assault the final stronghold of the Reich, the Fuhrer is killed by his psychotic son, Adolf III. To cover his escape, the young dictator sends his soldiers and Cyborg Overman to slow down the Fighters. Uncle Sam, feeling the spirit of freedom come across the land, becomes empowered enough to stand toe to toe with the robotic supervillain. While the Freedom Fighters are distracted, Adolf III activates his family’s last resort: a nuclear bomb. How will the Fighters save the day? 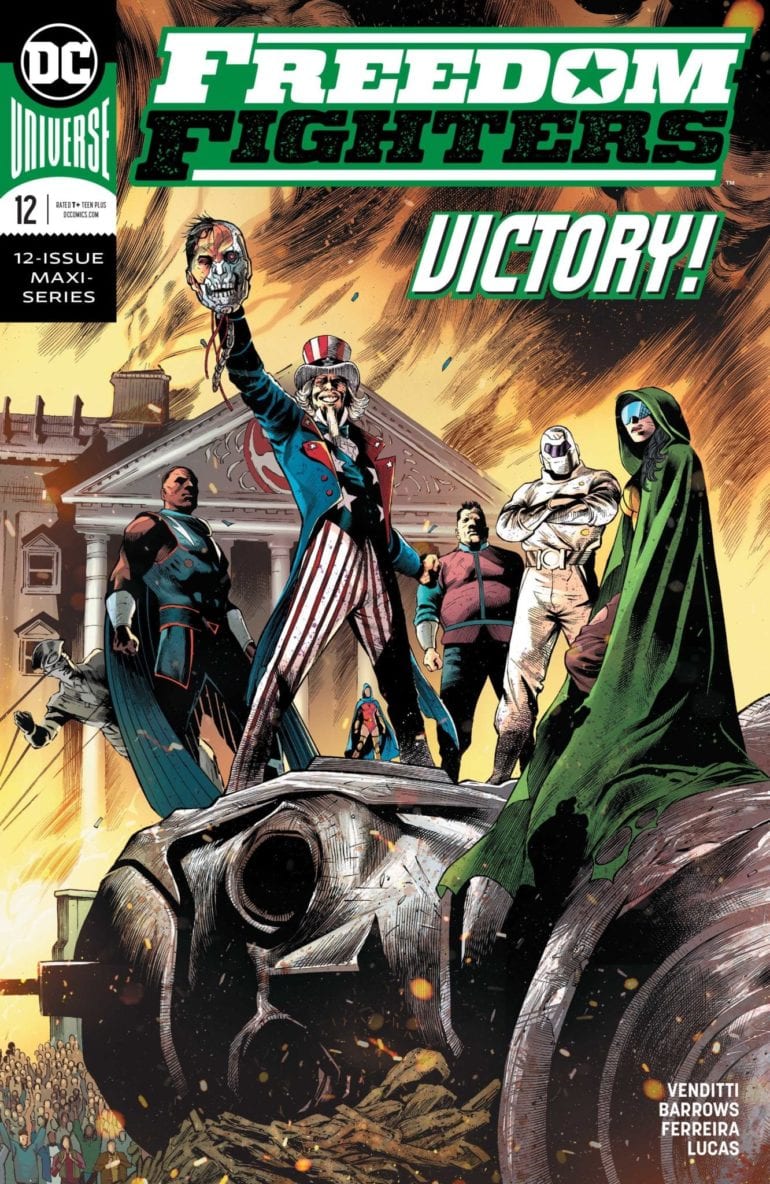 Uncle Sam continues to trade blows with Cyborg Overman as time continues to tick down on the bomb. It soon becomes apparent that the spirit of freedom in America has grown so strong that Sam is basically toying with the nazi. He soon puts down the superweapon and heroes off to find his team. The rest of the Freedom Fighters find Hitler’s inner sanctum and finds the remains of the Fuhrer. As Sam joins them, Adolf III sends them a message telling them of the nuclear bomb that will take out the mountain and surrounding area. With no other choice, the Human Bomb says them he will bury the bomb by blowing up the mountain, sacrificing himself. 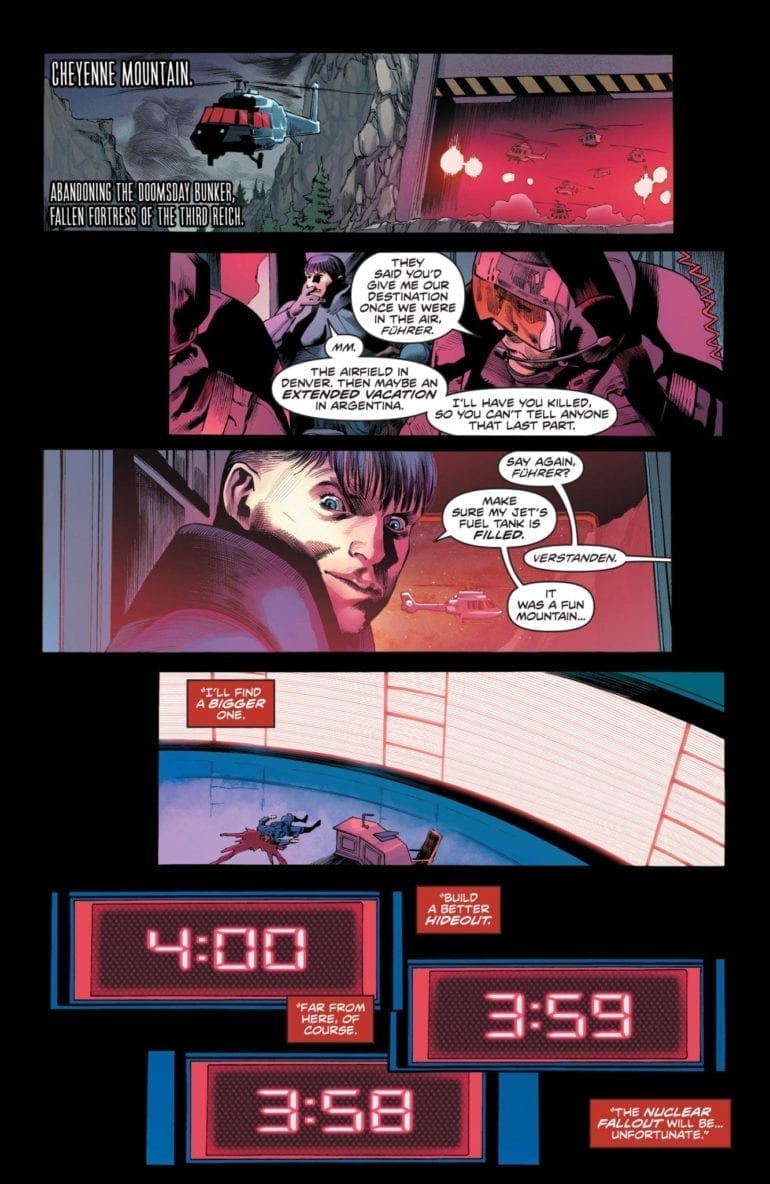 The ending of the Freedom Fighters might feel off as a stand-alone issue. We just hop from each setting to the next so quickly that there isn’t much time to take in what’s happening during a first reading. When you take a second read, however, you get a large smile on your face. You see that the mission the Freedom Fighters has worked towards is finally over. You get a sense of hope that tyrants such as the Nazis can be overthrown if you have people who believe in freedom.

The biggest problem I have is the final two pages that we leave the story on. It involves tying up a loose end in an incredibly dark way. While justice is sweet, it would have been better if this story ended on that idea of hope that the Fighters pushed for all this time. It’s not enough to ruin the story, but it could have left us on a lighter note. 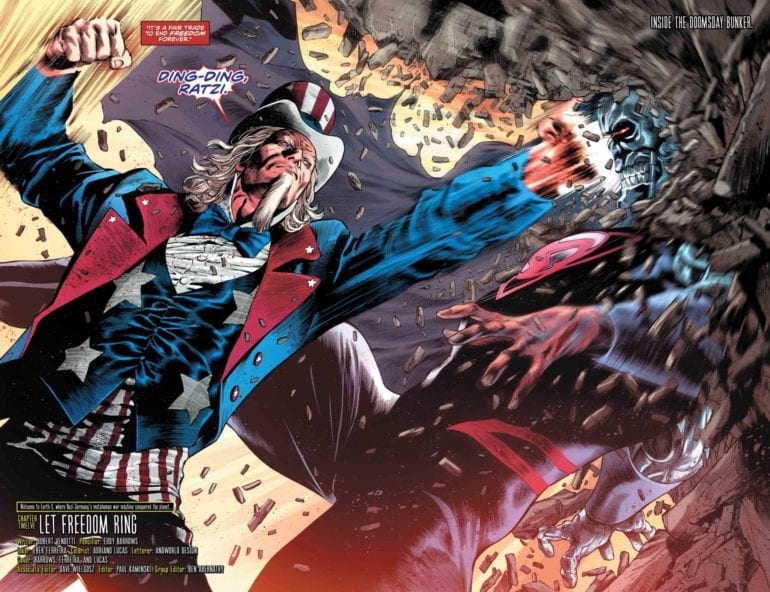 The art might not be as spectacular as the last issue, but still had some jaw-dropping visuals. They continue to provide dark and epic panels genuinely fitting to the world of the Freedom Fighters. Readers will be able to feel each blow during the battle and the horror of the final two pages. The best looking piece, however, comes in the continuously excellent character design. We are left with the reveal of three new heroes that help finish the fight, and while I won’t spoil, it certainly fills readers with hope. Eddy Barrows did a fantastic job this whole run and deserved all the praise he gets. 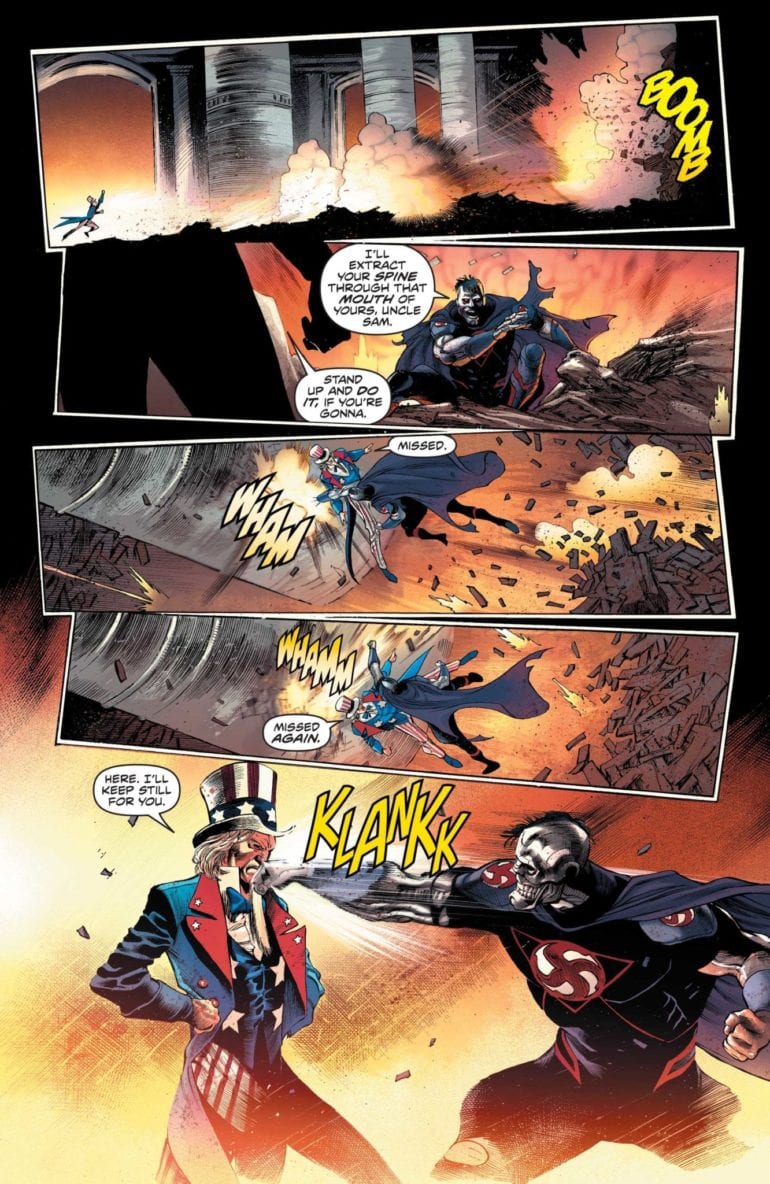 Freedom Fighters was a series that nobody asked for but deserves to be recognized. This group of C-List heroes provides twelve issues of kick-ass, nazi fighting action, and adventure to gaze upon. The art team takes the story further by providing us with a dark, gritty look at this world. While I would have preferred a lighter ending, I won’t lie when I say that this issue was damn near the perfect. If you have a chance to pick up this series in a collected format, I highly recommend it. Freedom Fighters forever.

Review: FREEDOM FIGHTERS #12 Achieves Victory on Earth XFreedom Fighters' Finale is as explosive and epic as its start.