THE FINAL GIRLS hits comiXology tomorrow (March 30th), and Monkeys Fighting Robots got an exclusive peek at how artist Sally Cantirino crafted the cover for issue #1.

The series is a comiXology Original by Cantirino and writer Cara Ellison (making her creator-owned comic book writing debut), with colors by Gab Contreras, and letters by Joamette Gil. It’s a five-issue series, and all five issues will be available to binge read tomorrow.

About the series:
The world’s most popular superheroes have come and gone. The year is 2030 and most of the glamorous American superheroes of the last era have been wiped out, leaving only a handful to deal with the world’s crises. Welcome to The Final Girls.

Part dark comedic superhero drama, part dystopian political thriller, The Final Girls is set six years after the hero collective the Scottish tabloids named “The Final Girls” —Kogarashi, Bavanshee, Selkie, and Ash—left civil service and disappeared into the less fraught alleyways of Scotland. When Scathach, the world’s most powerful working hero, asks her retired peers for help, they secretly agree to deal out punishment on another hero in the public eye. When the weapon of publicity is wielded, it threatens to kick up all of their personal traumas, past and present. What does justice look like when violence isn’t enough?

Cantirino calls THE FINAL GIRLS “a comic about what abuse of power, reparative justice, and real change might look like.”

“Inside every superhuman, there’s still a human,” said Ellison. “And the human needs to eat, pay the bills, have relationships, and send invoices. But what happens when superhumans realise that all the fragile systems of society and economy and politics are going to kill them, just like everyone else? What use is smashing someone through a window when the system that created them still exists?”

On working with Cantirino, Ellison continues, “[Sally] brings punk aesthetics and a scratchy horror vibe to the mood of THE FINAL GIRLS. [She] has a really good sense of how powerful women posture and how angry they can be.”

Read what Cantirino has to say about her art process:

“We wanted something involving a picture or selfie of the group and it took us a few rounds to get there. I wanted to evoke the way that you take a picture with your girlfriends when you’re out drinking in the bar or club bathroom, while also referencing the kind of collateral damage that happens in a superhero fight in TV and movies. Looking back on the cover now, the series deals with the collateral damage and fall-out that people leave in the wake of their actions.”

“When I get a script, I start by breaking it down with a pack of highlighters and different colors of pens— one color for dialogue, one for captions, one for SFX, I make lists of everything I will need to establish a design for or find reference for. I figure out very loosely what the panel count and page configuration will be, to account for what shots need to be big exposition or establishing shots, what panels need to accommodate lots of dialogue or captions. I figure out where all the captions and balloons go at this point too.

“After that, I do most of my work on my iPad Pro and Clip Studio Paint— I draw my layouts at about half-letter size, then scale them up in very light blue on my template for my pencils. It gives me a rough underdrawing to build from, so I try to be pretty thorough in my drawing at the layout level before I even start pencils.

“I still ink using analog tools. I have a large format printer/scanner which allows me to print my panel borders in black and very light pencil lines in blue onto 11 x 17 Bristol board. For a long time I used Raphael 8404 brushes and sumi ink, but switched to using brush pens during this book due to shipping/supply issues during the pandemic. I’ve been using Pentel Pigment brush pens with Platinum Carbon ink ever since. After scanning, I do a little clean up and formatting in Photoshop before it goes off to Gab Contreras for colors and Joamette Gil for letters.” 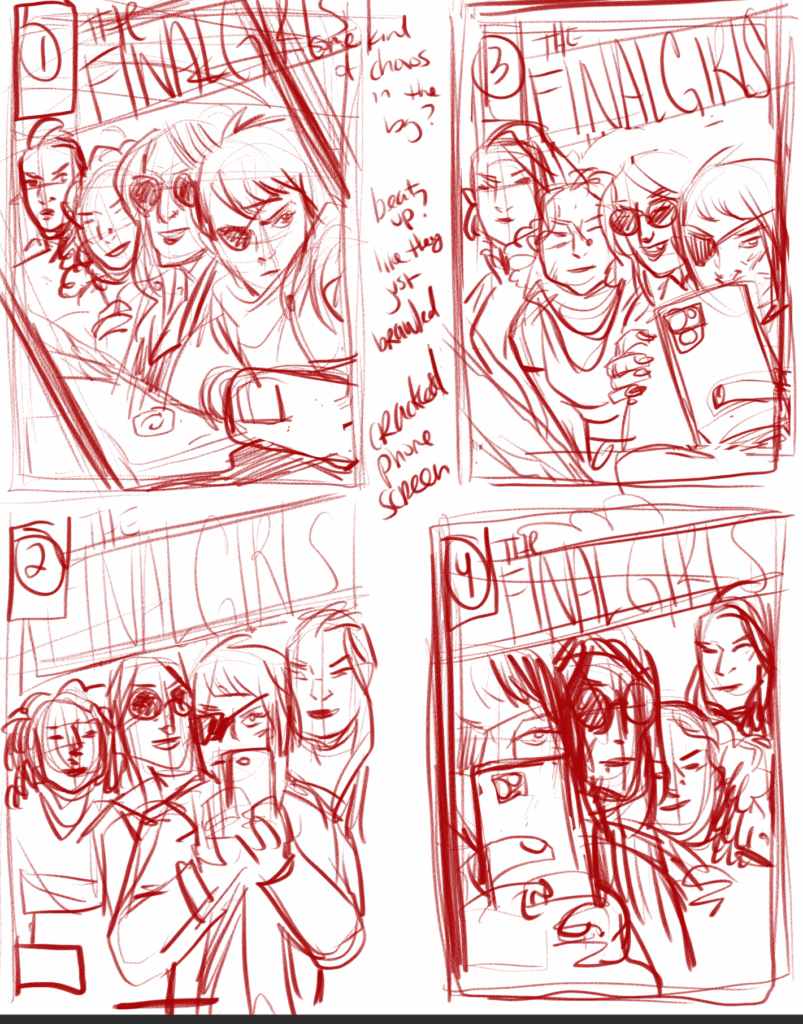 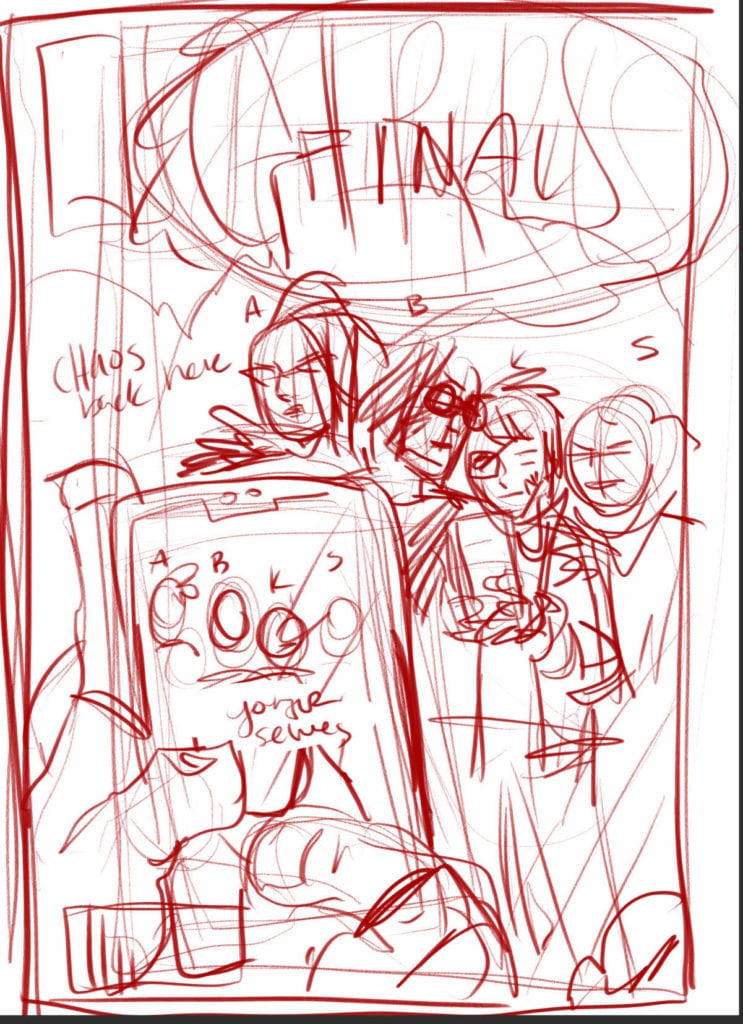 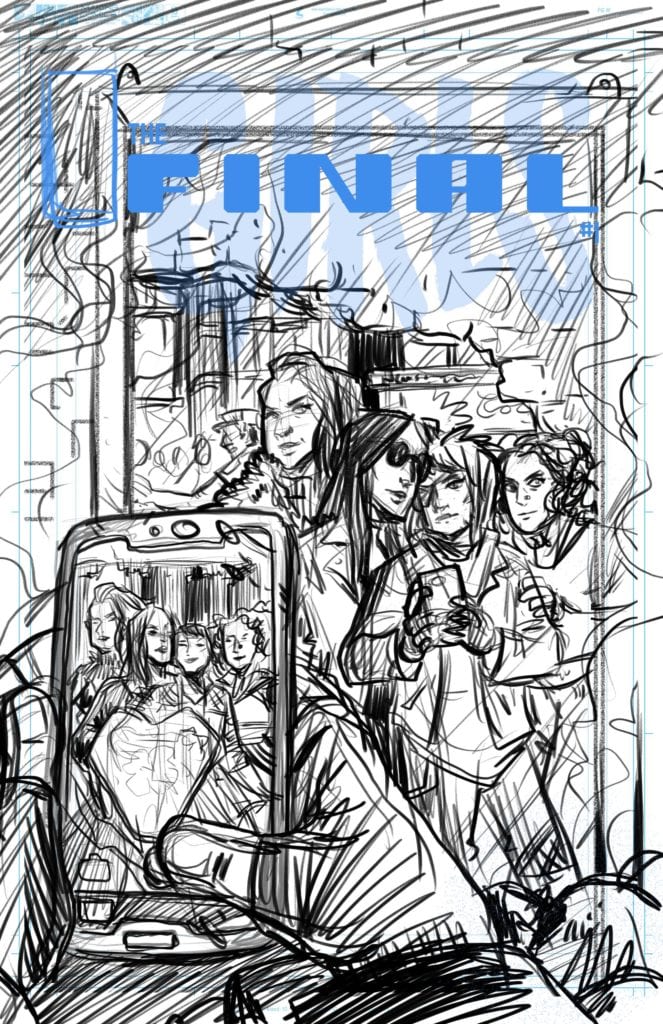 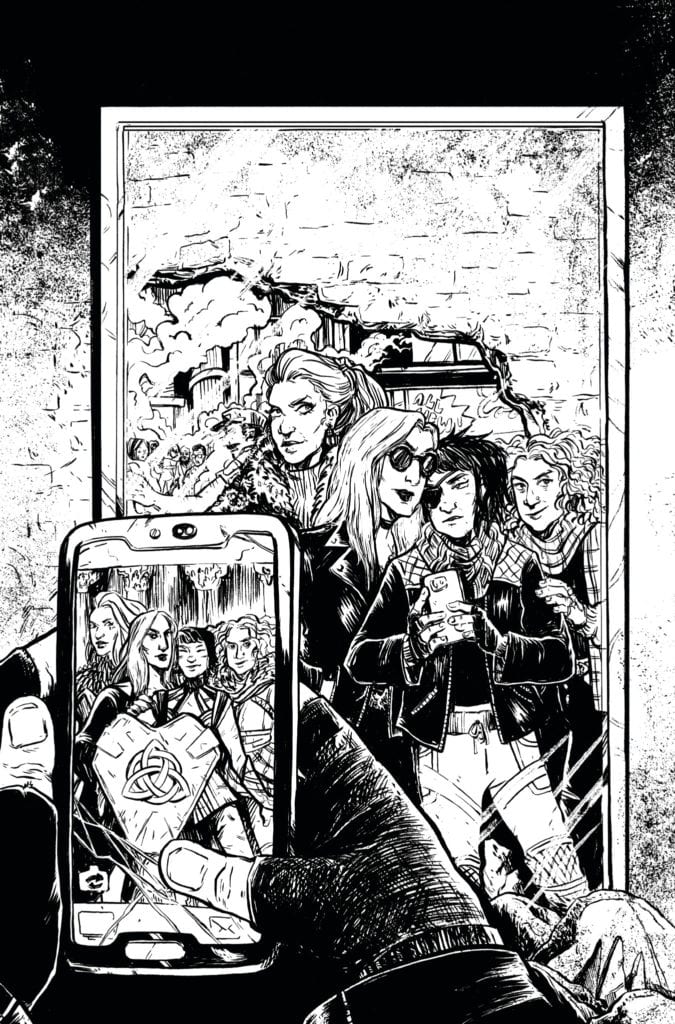 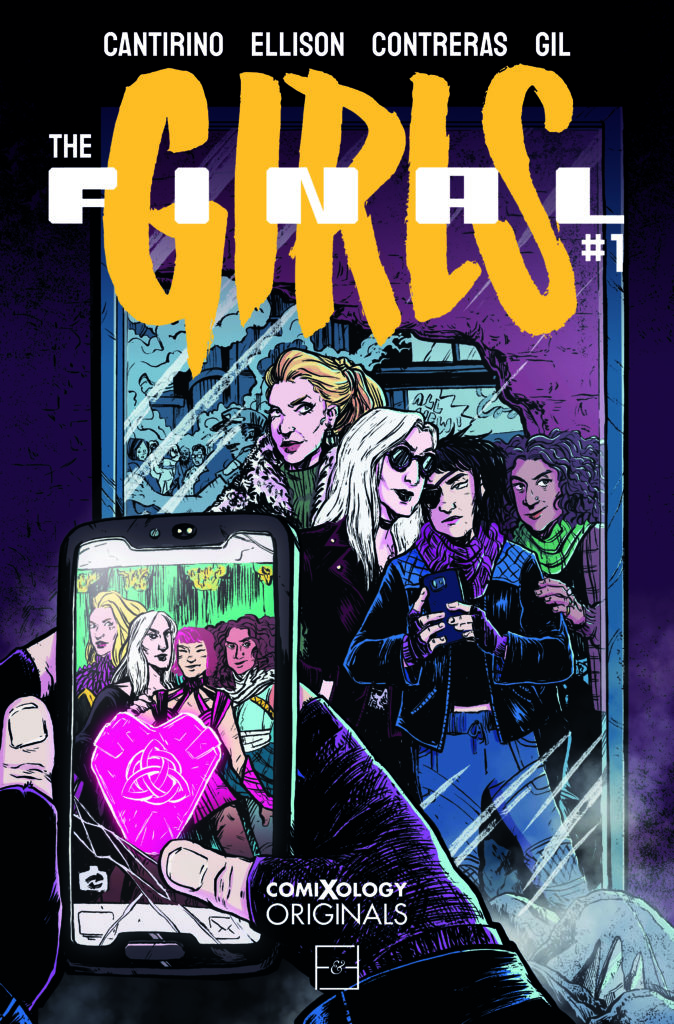 THE FINAL GIRLS drops on comiXology tomorrow. Thanks again to Sally Cantirino for sharing her process with us!