If you haven’t read Justice League Odyssey #12, turn back now as there will be spoilers ahead.

In the last issue, Darkseid used his Omega Beams to turn Green Lantern Jessica Cruz into ash. This shocking ending was a gut punch to fans of the character. The biggest question is, what happens next? There may be a few clues in the preview below. 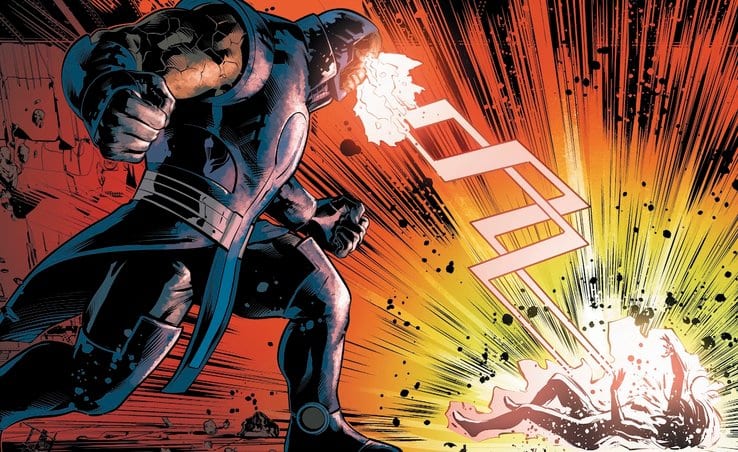 Justice League Odyssey #13 hits your local comic book shop on September 11, but thanks to DC Comics, Monkeys Fighting Robots has an exclusive five-page preview for you to check out.

The book is written by Dan Abnett, with art by Will Conrad, Cliff Richards helped with finishes, Rain Beredo handled colors, and letters are by Andworld Design. Conrad and Beredo worked on the main cover, and Lucio Parrillo worked on the variant.

About the issue:
Sepulkore is activated! The entire Ghost Sector has been imprisoned and enslaved as a new realm of Apokolips, with Darkseid as its supreme ruler! Returned to power, with reborn New Gods at his side and the Ghost Sector as an implacable fortress, Darkseid sets his sights on the remaining universe! Can anyone stand in his way? Where are Justice League Odyssey? And what are the shocking identities of the heralds who now do Darkseid’s malevolent bidding?

Do you have Justice League Odyssey on your pull list? Let us know what you think of the book in the comment section below.

CHECK OUT THE JUSTICE LEAGUE ODYSSEY #13 PREVIEW BELOW

2544
Find out how to get the
Monkeys Fighting Robots magazine!

AfterShock Comics Exclusive Preview: THE LION AND THE EAGLE #1