DEATH OF THE INHUMANS #1 written by Donny Cates, art by Ariel Olivetti, colors by Jordie Bellaire, and letters by Clayton Cowles finally hits the shelves this week as Cates’ highly anticipated event leaves readers wondering; is this the end of the Inhumans?

Cates kicks off this series with death, annihilation, and genocide led by a new ruthless Inhuman named Vox, who looks like a creepy Lord Zed from Power Rangers. Who will be left standing after this issue? Let’s jump in and find out!

Spoilers. I know many of you hate them. But, you know what they say, When in Rome… was an amazing band!!! If you don’t believe me, look them up. I Promise you’ll love them!!

Cates opens the issue with some background to get the readers up to speed. The Kree experimented around the galaxy creating soldiers with abilities for their war against the cosmos. They did this to 5 different factions in the universe; one of which is the Inhumans we know led by Black Bolt.

Nervous of a prophecy foretelling of the Midnight King destroying the Kree, the Supreme Intelligence sent out a galactic-wide genocide of all branches of Inhumans.  Led by a villain created by the Kree containing various abilities of the Inhumans, Vox tore through the galaxy with a scythe of destruction.

Black Bolt leaves New Arctilan with his closest friends and compatriots to meet with the other four Inhuman factions at an undisclosed location. Black Bolt and his Inhumans arrive only to find the other four groups and heir Queens gruesomely killed.

Now, pay close attention to what Cates and Olivetti do in the above image because the creative genius is impressive. The four Queens are basically crucified, which was something the Ancient Romans did during the Pax Romana. If you remember from earlier in the story, Black Bolt was discussing how the Ancient Roman culture was and later references how “Rome wasn’t built in a day.”

Point is: if you are not familiar with Roman or Biblical History, you would just read this issue and pass some of these subtle nuances right by. But the Queen’s above were crucified, which was done to set a tone to any that oppose. Sure, it wasn’t on a cross, but the symbolism is there.

The Kree, led by Vox, is sending a message to all the Inhumans. They are gonna die and it’s going to be horrific, bloody, and painful. Excellent symbolism and teamwork by Cates and Olivetti!

Triton realizes at the last minute that Vox set up a bomb to attempt to kill Black Bolt.  However, the most badass dog in all the nine realms saves the day again!  Lockjaw teleports everyone out just in time-saving everyone but Triton.

Medusa realizes that this bomb wasn’t meant to kill but only to injure and keep them occupied. Why? Because Vox wanted them away to slaughter all the Inhumans left at New Arctilan.

Lord Zed, I mean Vox (above), does look pretty menacing here by Olivetti and her art team. However, don’t you think Vox could also be “the Midnight King” that was foretold to the Kree Supreme Intelligence? Just a thought.

Cates throws a curveball into the mix and kills everyone right out of the gate. Now, he sends Vox to slaughter all of the Inhumans left at New Arctilan, including Black Bolt’s brother Maximus the Mad. Once Black Bolt realizes Vox’s plan, he realizes he needs to get home fast. Lockjaw is still too far away to teleport anyone there.

Whisper Down the Lane

Above, you’ll see one of my favorite pages of the issue. Cates & Olivetti are working so well together throughout this issue, and this page shows just how they make the strawberry jam taste so dang good!

Look at how Cates uses Black Bolt’s powers to get his compatriots close enough for Lockjaw to use his teleportation ability. Even just a whisper from Black Bolt, sends them blasting through space faster than their engines.

Also, look at how Olivetti paints this picture with the help of Bellaire and Cowles. Black Bolt is so small compared to his ship. AND the black, darkness of space is colored so well done, making the situation seem so lonely, hopeless, and lost.

Better yet, the small and straightforward lettering by Cowles to show that all Black Bolt needs to do to move his gigantic ship across space at close to light speeds, is to whisper into space out the back. Together, this page shows the time and preparation this team took into creating this issue. Amazing job!

Once in range, Lockjaw teleports in and attempts to save Maximus only to have Vox hit them both with some type of red energy while (I think) Lockjaw tried to teleport them both away. The issue ends with Black Bolt arriving with his crew to see them decimated remains of New Arctilan and his people.

Cates & Olivetti do a fantastic job kick starting this series out of the gate with death, destruction, and characters we know actually dying. This is going to be a fun ride. However, I hope you’re listening Cates.

If the Inhumans got to go, fine. But not Lockjaw. Seriously, 2 of my little boys think he is the coolest dog ever! I think he’s the coolest pet ever! Heck, anyone with little kids, go read Pet Avengers. It’s great! Don’t make me tell my boys he’s dead.  AND, it kind of looked like you killed him there at the end. Just saying….

Also, where is Blinky and Crusher Creel? They were just in the Black Bolt series.

Yes! Great start! Great art! And, I have faith that Cates will not kill the world’s most amazing animal. Lockjaw will survive. HE MUST!

Absolutely! I think we have enough background on Cates to know how amazing his stories can be. Now’s your chance to hop on the train as it leaves the station. It really was a great action-packed start to the series.  I have no doubt you’ll enjoy it as long as Lockjaw doesn’t die.

Well, what did you guys think of DEATH OF THE INHUMANS #1? Comment below or hit me up on Twitter @dispatchdcu 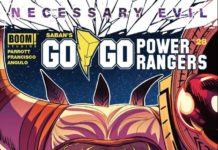 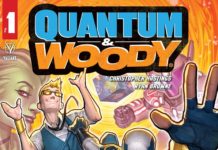 QUANTUM & WOODY #1 Shows How To Make The Basics Funny 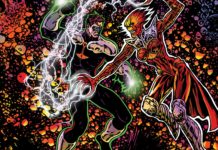