BRZRKR #1, after a Kickstarter campaign no one saw coming, is out on March 3 from Boom! Studios. Keanu Reeves gives his likeness to the titular character and serves as co-writer to Matt Kindt. It’s a likeness that Ron Garney artist and colorist Bill Crabtree capture in brutal action. Even the lettering by Clem Robins nails down the simplicity evoking Reeves characters like John Wick.

Kindt, who built his career off the nature of memes in Mind MGMT and Bang!, is the perfect writer for this series. Keanu Reeves’ own recent career has practically turned him into a meme. With Reeves’ face in every form of mass media, Kindt and Reeves comment on the actor’s oversaturation.

In essence, the titular character of BRZRKR #1 is every major depiction of Keanu Reeves’ career, no doubt because Reeves himself is providing it. The berserker has the general appearance and attitude of Reeves’ character, John Wick. He’s a maverick with enough influence to do whatever he wants, like kill instead of capture a target in his blind rage. The berserker is also immortal, with scientists trying to figure stuff out about him, including a psychologist who regularly meets with him. This gives the Berserker an almost godly presence that he wishes he hadn’t.

What makes the Berserker interesting isn’t that he’s searching for death; he just wants to be mortal. I can’t help but think this is what Reeves’ wants in his career. Because in all honesty, who wants to watch or keep playing the same role? Which considering reports of a fourth John Wick movie, the franchise and  Reeves’ career could be in danger of becoming a Franchise Zombie. This is why the artistic elements of BRZRKR #1 present this as a parody of Reeves’ meme status.

The Art of Keanu Reeves Depictions 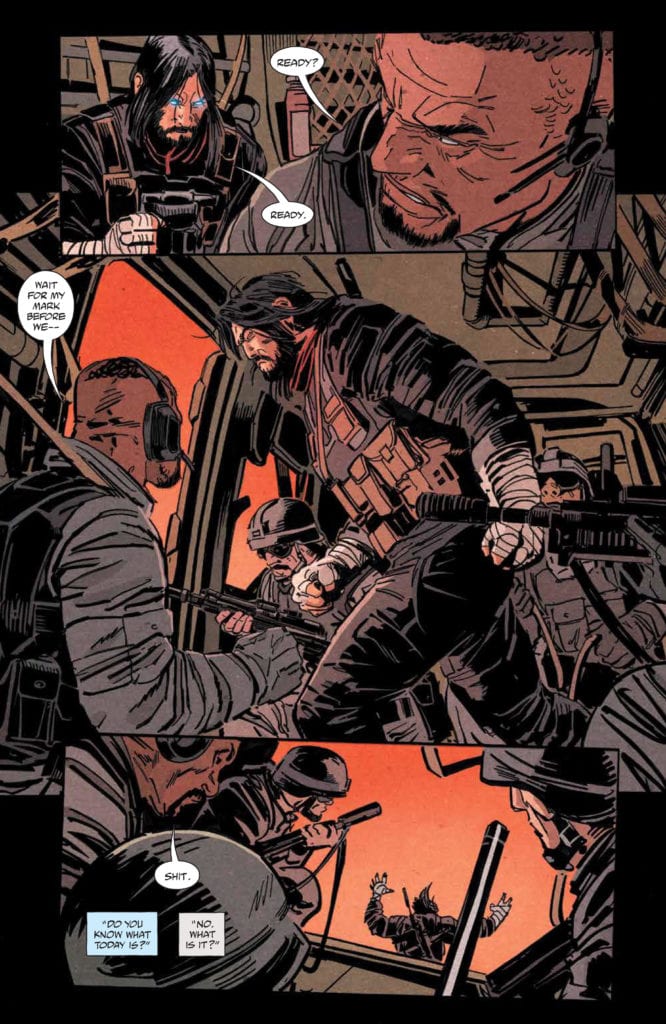 In just the opening of BRZRKR #1, we see the berserker in a scene evoking the Sad Keanu meme. For Reeve’s fans, this tells the reader what kind of character the berserker is, a super-powered John Wick, which given the brutal over the top actions that Garney illustrates, this comparison isn’t far off. Combining with red colors that Crabtree uses to accompany the berserker, the title character remains the center of attention. Sometimes it’s when the background disappears, like when the berserker dodges a bullet or when he’s being operated on in a blue room. 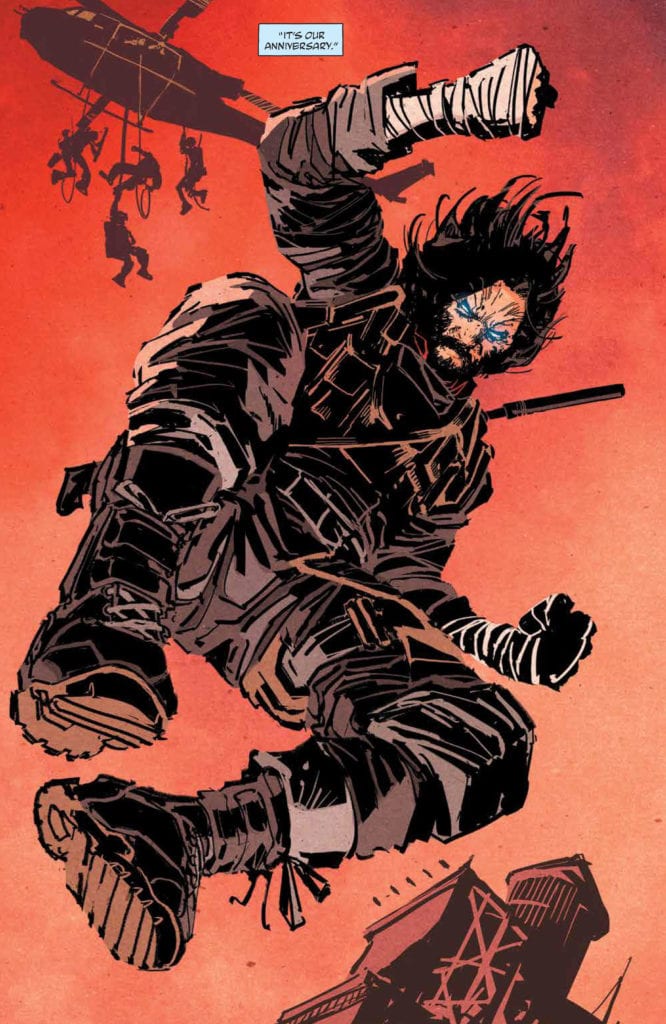 The most clever art in BRZRKR #1 comes from the lettering by Robins. The captions that the berserker talks to his psychologist are in juxtaposition with the berserker killing people. Considering Kindt has it written like the Berserker is talking to a significant other, this comes across as a parody of John Wick. I mean, the psychologist says, “it’s our anniversary,” like she’s his wife. The blue captions are a light blue color indicating a sense of ease, unlike the cold gray ones of the berserker. So when the berserker turns up at an operating table, it indicates this loving sense the reader got on implication is just part of the berserker’s job. It’s a rather tragic comedy when you look at it like that.

BRZRKR #1 is an interesting beginning to a Keanu Reeves satirical commentary. By going into how the memes that catapulted his career made him like an undying god, Reeves and the creative team parody oversaturation. Which considering the satirical layer some fans like Wisecrack find in John Wick, it’s on-brand.

What do you all think? Is there more to BRZRKR than a comic profiting off a celebrity?

BRZRKR #1 starts off a huge surprise with how it's a satirical take on Keanu Reeves' recent career.BRZRKR #1: Capturing Keanu Reeves The Meme