Bird Box is a horror film that made a huge splash when it premiered on Netflix in January and making the movie look seamless is Marcus Taormina who handled the hundreds of FX shots in the film.

Marcus Taormina started his career back in 2009 as a “data wrangler” for the Dragonball: Evolution film. Flash-forward ten years later and Marcus’ resume includes working on projects such as Teenage Mutant Ninja Turtles: Out of the Shadows, Fast and Furious, Amazing Spider-Man, and Guardians of the Galaxy. In 2017, he leveled up to Visual Effects Supervisor on the Netflix film Bright.

PopAxiom put on a blindfold to talk to Marcus via the phone about working in the movie industry, making special effects, and what was his biggest challenge while making Bird Box. 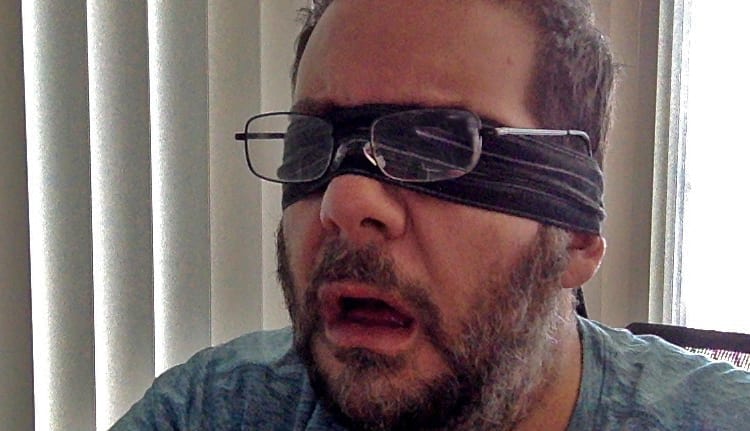 Marcus started making movies early on “I think it goes back to my childhood when I would steal my parents’ camera. I’d sneak down into the basement and tried my best making stop-motion kind of movies. Lamps for lighting. Anything I could grab.”

But it was just a hobby, and he went to school to study computers “It never really occurred to me until my sophomore year in college that I could make working on movies a career. I changed my major from Computer Science to Media Studies.”

After the switch, Marcus “… explored that world as much as I could … Exposed myself to everything I could. I started to get into classes about animation and what you could do with green screen. How much you could manipulate picture to the point that an audience would believe it.”

From computer science to filmmaking “Working in visual effects is the best of both worlds for me.”

Marcus points to one film immediately when asked what influenced his love of FX as a kid “… Terminator 2. If I walked into that theater, I could tell you where I was sitting. It was so cool, breathtaking, and real. But in this gritty way.”

A couple of other films come to mind “I’m a big fan of Indiana Jones; also Jurassic Park … how forward-thinking they were on that film.”

On to Bird Box, the film that took over January and caused nationwide trends that Netflix was not happy about. Famously, the movie garnered 45 million views within the first few days. On the surface, Bird Box doesn’t look like an effects-heavy film but according to Marcus “There were 520 visual effects shots in the movie.”

The number includes “A combination of computer-generated images or cleanup and practical stuff.”

For Marcus, he approaches each project with the idea of “… doing as much practically and support it later on with visual effects.”

Marcus shares a few examples “Jessica’s death, when she gets hit by the garbage truck, we tried to do that in more of an ‘old-school’ fashion. We shot Jessica walking out of the house and into the street, the garbage truck passing, etc. We’d do a few little bits of compositing tricks. But as soon as we shot it, it lacked that frenetic, violent action it needed.”

CGI was used instead “In post-production, we utilized the portion of Jessica walking out and the stunt-pass for reference.”

And the computer, oddly, made it more real “Rendering the scene, the software accounted for the mass and speed of the truck. Because of that, it would push the hair in front of the face. Normally you don’t want to cover an actors face. But the motion of the hair made it feel so visceral that we kept it.”

Computers can help when actors don’t do what you want “Another scene was the birds in the market … we worked with an animal wrangler who was confident she could get the birds to make this frantic motion and sell to the audience that they’re scared. But … the birds would only react to the wrangler a handful of time. It got to the point where we don’t want to stress the birds out anymore. So we did it digitally.”

If you haven’t watched Bird Box, maybe skip
to the final section called “Wrapping Up.”

The big non-reveal of Bird Box is that the audience never sees the actual creature or “presence” as Marcus likes to call it. How did that play out from production to post? “We did months and months of R&D, some really great concepts we came up with, artwork, and 3D simulations that never made it into the final film.”

About the decision to not show a creature “Ultimately, I agree with the idea of not showing a creature. It just felt like it was all within the viewers’ eyes. Everyone can interpret the creature differently.”

Closing out I ask Marcus to name a recent film that’s impressed him recently “I have to say Avengers: Infinity Wars because of the sheer complexity of those effects. From a technical standpoint, it’s impressive. They’re really pushing the bar.”

Thanks to Marcus Taormina and Impact24 PR for making this interview possible.