Review: BATMAN AND THE OUTSIDERS #2 Focuses on the New Characters

Batman and The Outsiders race to Save a Metahuman!

Batman and the Outsiders are back in the spotlight! Batman has reformed his team consisting of lesser-known street-level heroes. We have old favorites such as Katana and Black Lightning, making their return, as well as newcomers Signal and Orphan. Together, they will work from the shadows to defend Gotham City.

Their first mission comes when a young girl and her father are attacked on the road. The girl, Sofia, was a part of a metahuman creation program and someone wants her for themselves. The reason he knows about this is that Bruce saved her and took her to safety. While the team does agree to help, Black Lightning begins to wonder what other secrets does the Dark Knight has hidden from them. Will this mistrust be put aside to save an innocent? 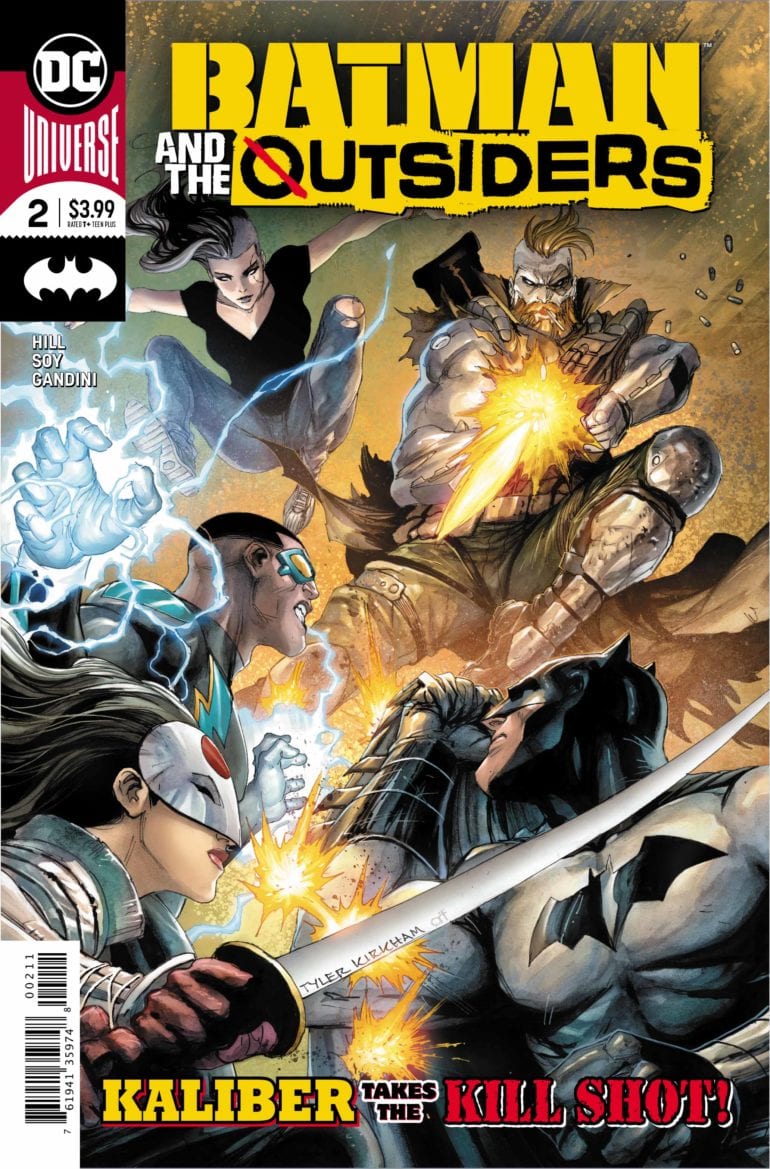 We open with Bruce talking to Black Lightning about the girl they need to help. Sofia has been picked up by another of Batman’s associates, Kaliber, and is on the run from a man called Ishmael. Black Lightning, despite his curiosity of the cyborg protecting her, agrees to take the team to help. Meanwhile, Kaliber tries to explain the situation to Sofia, but she isn’t on board. She asks Kaliber to give a gun to her to defend herself. As she is about to turn the high tech weapon against herself, Ishmael arrives to take her. Kaliber leaps in to protect her, as well as the Outsiders. 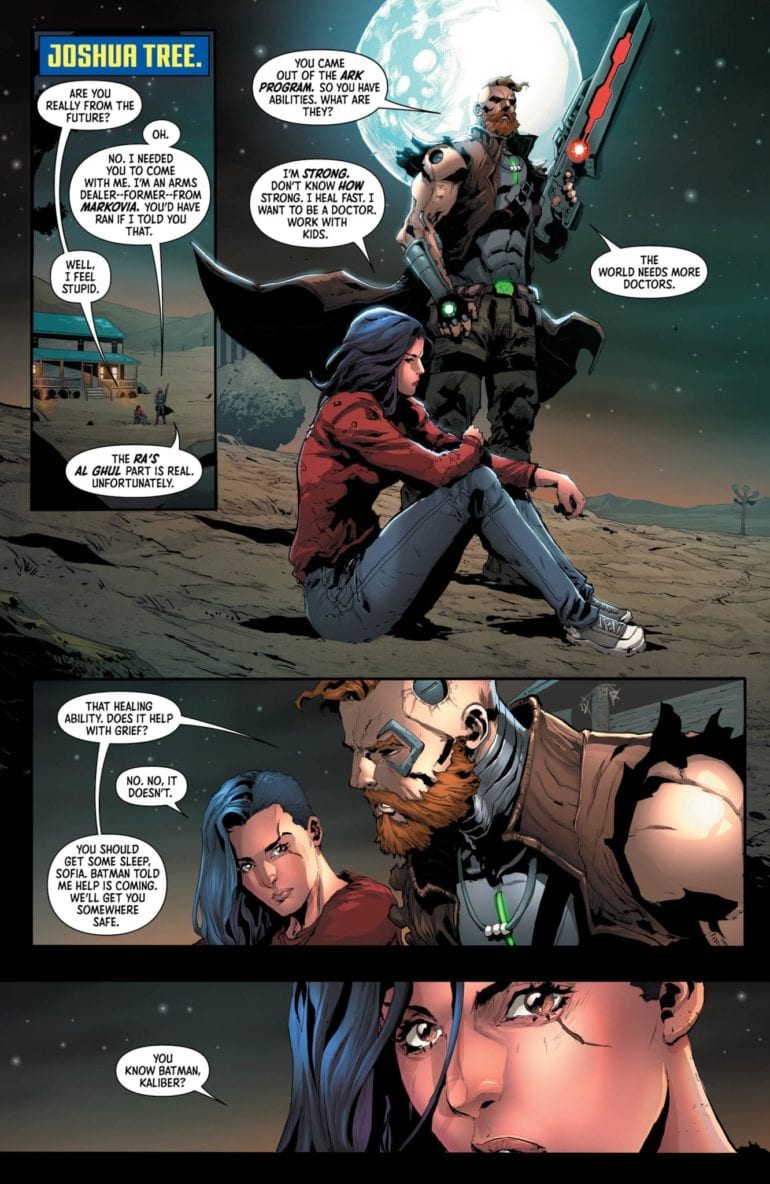 In the last issue, I had a problem with the fact that Batman had taken a back seat. Despite headlining this story, the Dark Knight continues to stay in the background, letting the B-list characters do the work. The issue this time around, however, is the fact that the team itself gets put in the back seat. Of the usual 21 pages, we only get the Outsiders in a quarter of them. The rest of the story revolves around Kaliber and Sofia. This is still early in the story, and we should learn more about these new characters, but there’s something offputting about the lack of title character in this story.

As for Kaliber and Sofia, only one of them intrigues me. Kaliber is your standard, run of the mill, soldier. He’s gruff, demands to stick to a plan and doesn’t trust Sofia. Old soldier characters like this are seen quite often in comics, but they are a strong character for a story like this. 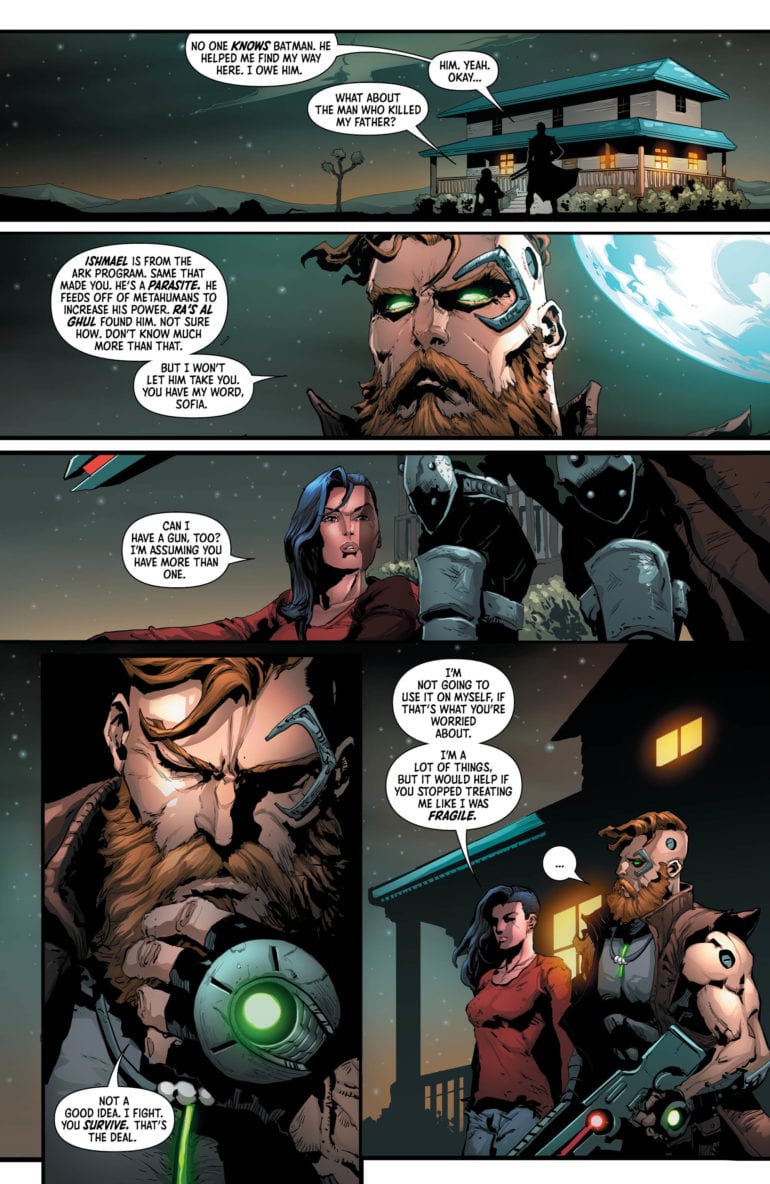 On the other hand, Sofia is a much more intriguing character. She is learning to survive in this world without her father, and she literally has this moment of weakness where this reader was scared to see if she’d go through with it. Despite her being only two issues old, this girl might be one of the more fleshed out characters amongst the Outsiders, and I love it.

Dexter Soy has been kicking ass with his illustrations in the book. Every one of the Outsiders looks badass, and the action is drawn exceptionally well. While I may have noted that Kaliber is a basic character, I can’t say he doesn’t look cool. Even the villain looks fantastic, as he prepares a ritualistic communication with his employer. The level of detail in each panel brings a smile to my face and brings the book up. 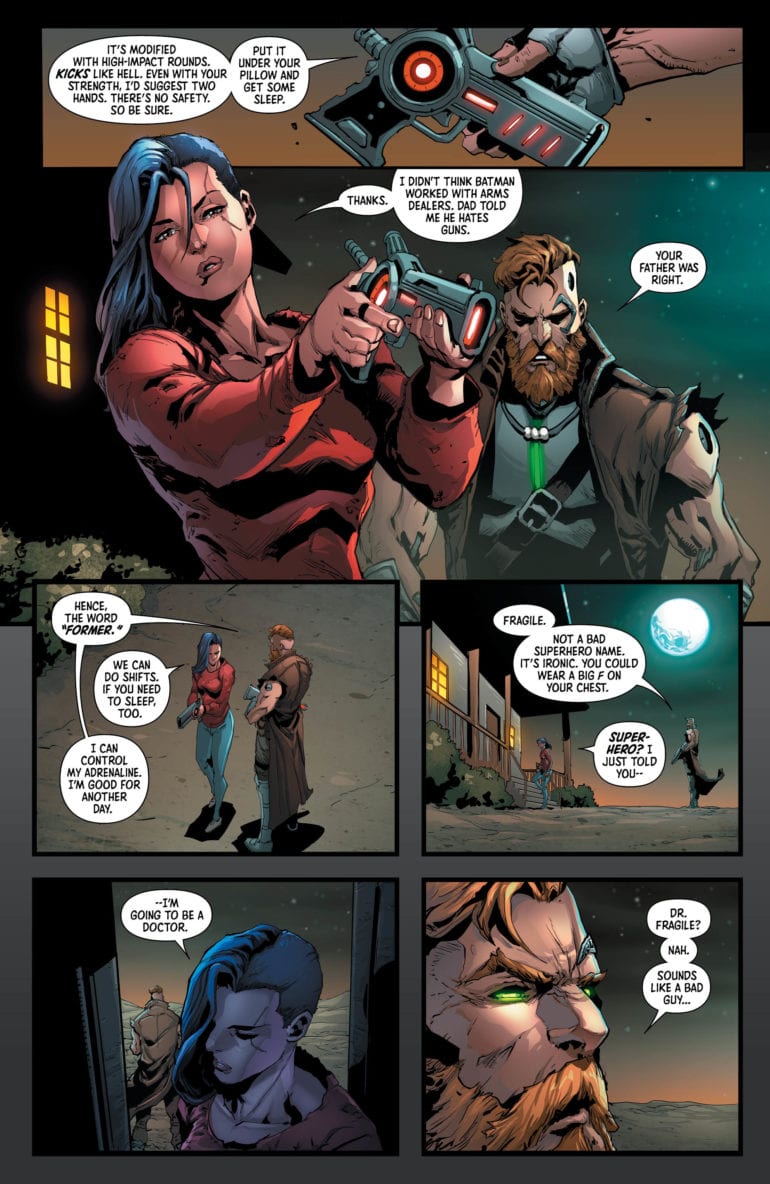 While the action is fun and our new character is interesting, this is a step down for the Outsiders. The second issue focused on Sofia and Kaliber, with the rest of the team hurrying to join them and Batman just not being in it. The series is still young, and with the big bad being revealed, we will probably get more of the team moving forward. For now, however, this issue was just “meh.”

Despite having an interesting new character, Batman and the Outsiders #2 feels like it's stepping away from its title.Review: BATMAN AND THE OUTSIDERS #2 Focuses on the New Characters