Review: BATMAN #88 Predicts A Deadly Encounter is on the Horizon

The Foes of Batman Prepare for the Worst

Bruce Wayne has been pushing for a change to Gotham City. He plans to renovate the city and upgrade his arsenal as Batman completely. As a new Wayne building opens up, five legendary killers lead by Deathstroke end up getting beaten by the caped crusader. After he takes them to GCPD, he learns that one of them, Cheshire, snuck away unnoticed. This leads to a chase through the streets of Gotham, with Batman throwing her into a truck. While all this is going on, the killers are released from GCPD. Before they can get far, they are captured by one of Batman’s oldest foes: The Penguin. What does Oswald Cobblepot want with some of the world’s deadliest killers? 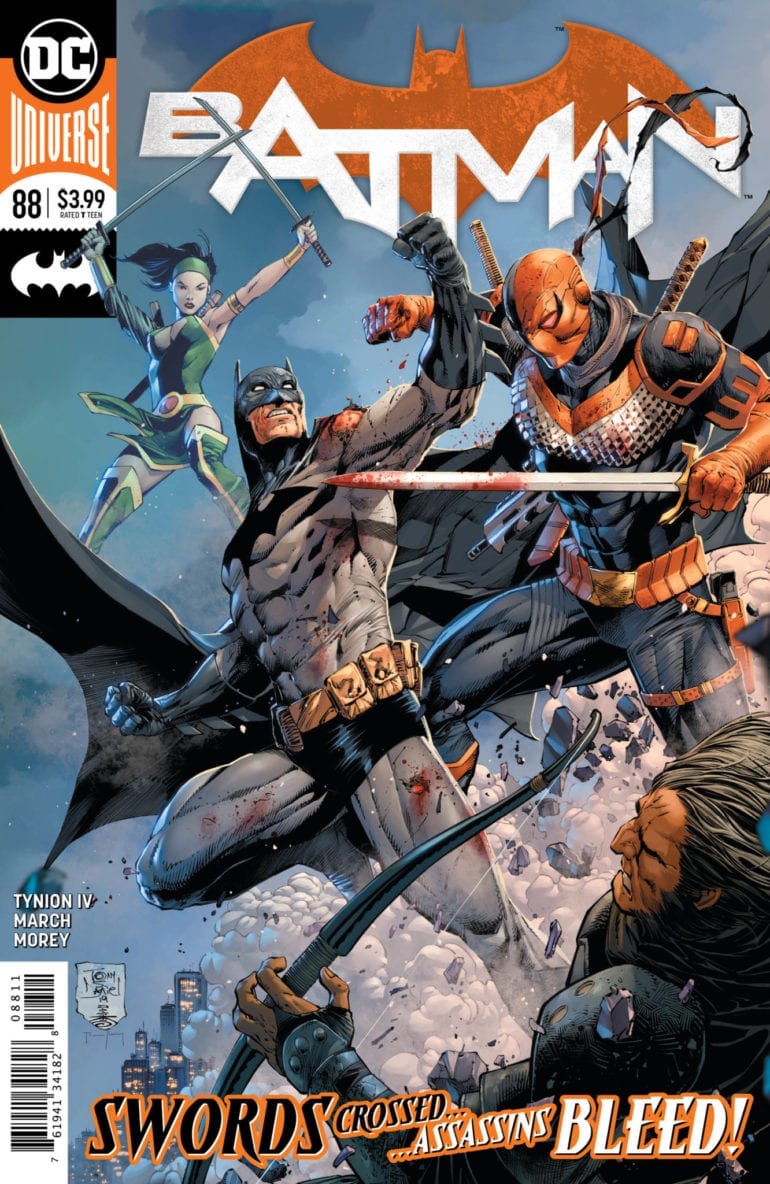 Picking up where we left off, the Penguin holds the hired killers hostage in a meat locker. He knows who hired them and wants to buy them out to save his own skin. Knowing that either scenario will lead to massive problems in the long run, Batman hurries to get back to GCPD. Lucius Fox helps him out by providing another fantastic new gadget. This new device allows Batman to turn any car into a makeshift batmobile. He quickly commandeers a car and makes his way to stop the villains.

Meanwhile, Catwoman digs up the grave of the Joker only to find him alive after their fight in King’s run. This causes Selina to realize that the oft she made with the significant players of Batman’s Rogues gallery is coming to fruition. 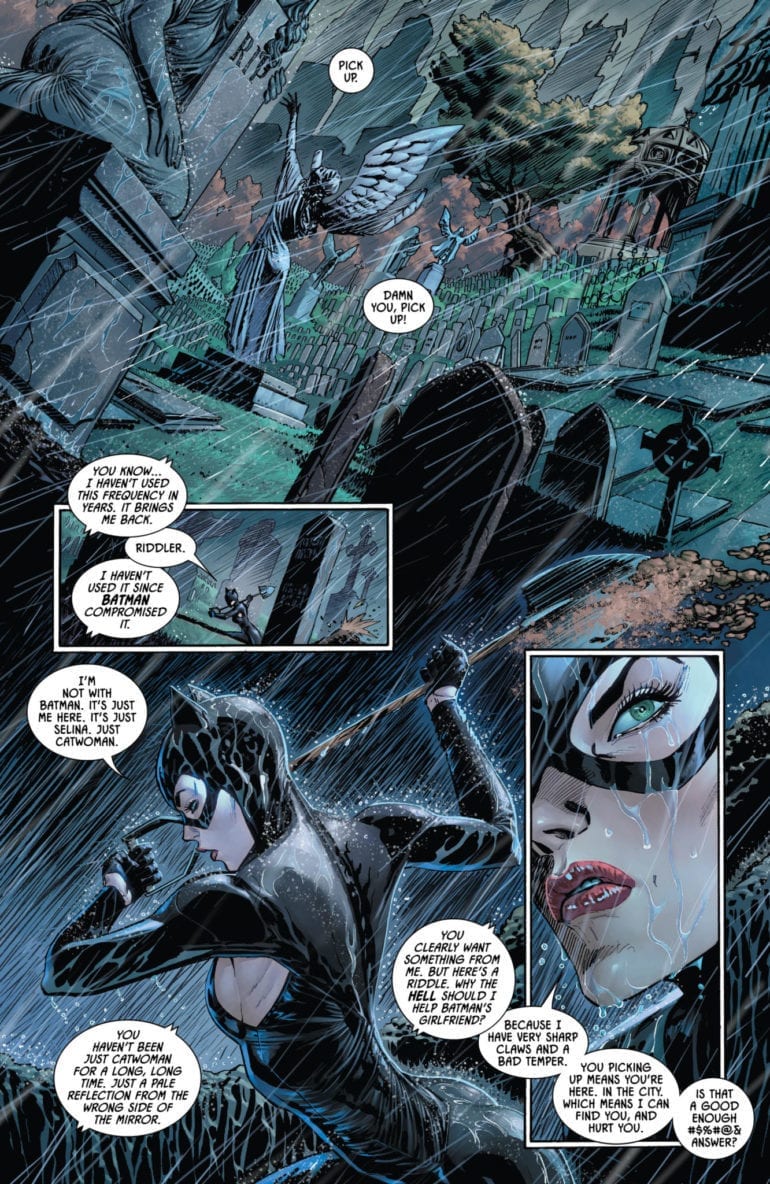 While the issue didn’t truly advance much in the plot, it did provide a sense of rising tension that will get readers hooked. The mystery behind this grand scheme leaves me interested in picking up the next issue. The characters act like this master plan is the worst thing that’s ever going to happen to Gotham, and you feel it. Even as they talk about The Designer, this reader’s mind races to try to figure out what Batman villain could be orchestrating this. I was shocked to learn this might be an even bigger threat than Joker, and I’m eager to see what comes.

That being said, the hype for future issues does not make a good comic. The action wasn’t enough to keep up entertainment value, and other then Catwoman checking on Joker, we haven’t moved a lot in terms of plot development. It’s still the start of the big story, but this really needs to pick up the pace if we want this to have a satisfying and exciting payoff. 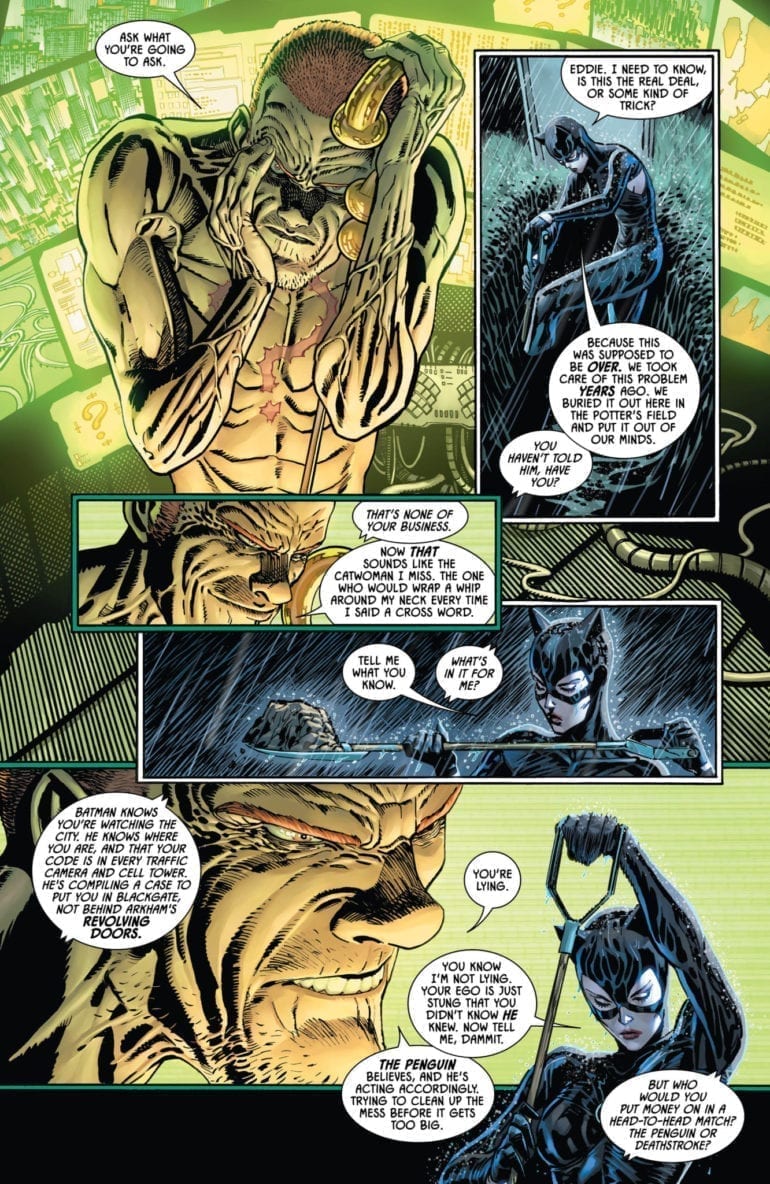 Guillem March is in charge of illustrating the story, and he does an overall good job. While I’m not a fan of his design for Riddler, I love his more monstrous design for Penguin and the level of detail on Batman and Deathstroke. His style is incredibly visceral, making me wince whenever the action kicks off, and blood starts flying.  The colorwork helps this by providing a wide array of colors that allow the characters to feel more alive than ever before. This art team has definitely made waves for this new run, and I truly hope they keep it up. 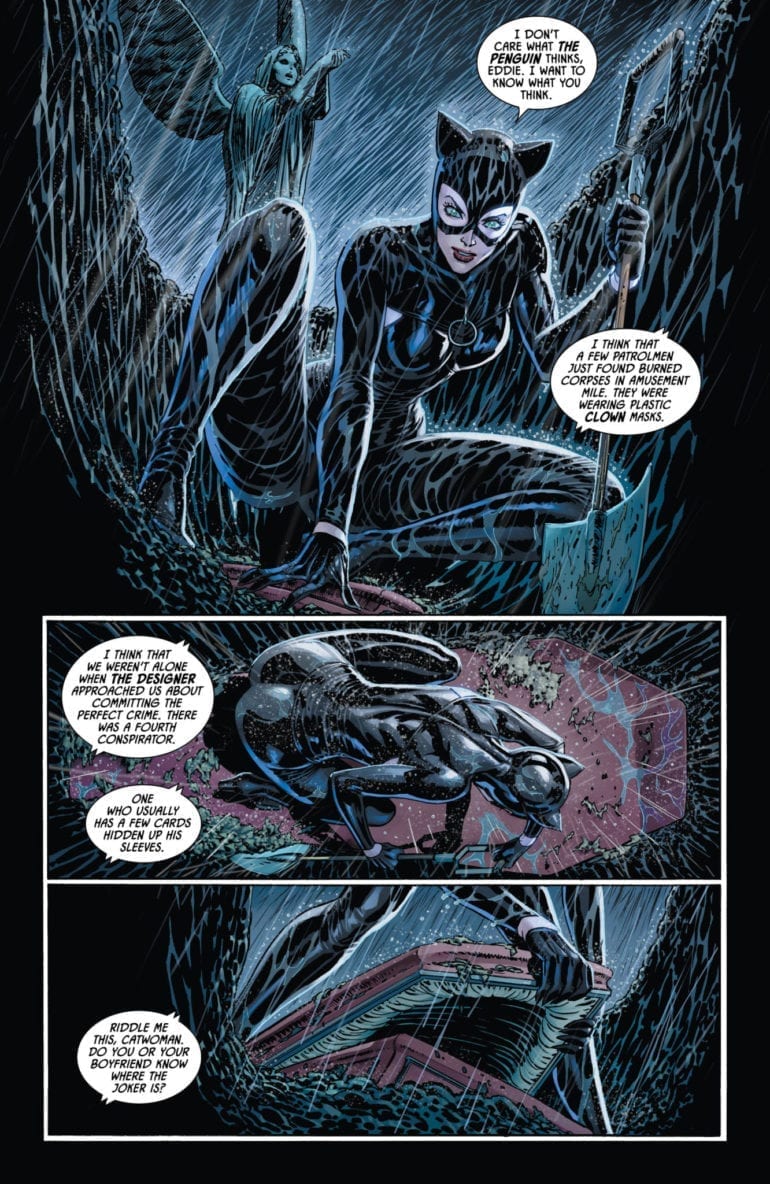 This issue of the new Batman run shows promise, but it still has a ways to go. While the art is done exceptionally well, the stories piecing is starting to drag. We keep getting this tease on a huge development, which this reader is undoubtedly excited about. That said, it’s not enough to excite now. Hopefully, with Catwoman and Batman nearly on the same page, we’ll be able to get the plot moving along. Right now, however, it’s just a so-so comic.

While it continues to promise exciting development for the future, this issue is anything but exciting.Review: BATMAN #88 Predicts A Deadly Encounter is on the Horizon