Aquaman and his archenemy, Black Manta have hated each other ever since that fateful day in which our hero accidentally caused the death of the villain’s father. But in this particular conflict, Manta has used his rage to craft a mechanized robot armor powered by his father’s memories mapped onto an A.I. At the same time, one of the monsters brought to life through his mystical powers grows stronger as the two rivals rage against one another. Will everyone lose in this deathmatch, or will someone stand up against hate? 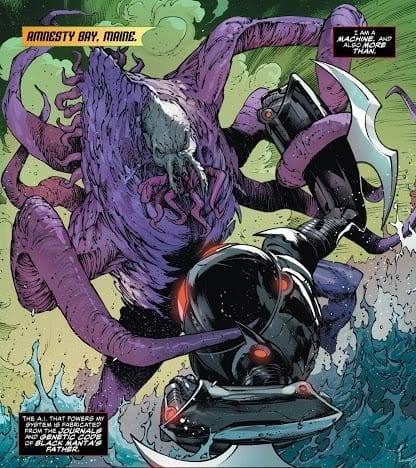 With a virtually impenetrable mech suit under his (seemingly) complete control, Manta appears to have the upper hand on Aquaman. But the aquatic hero isn’t alone. Miles away, Queen Mera uses her aquakinesis powers to generate an enormous water version of herself to even the playing field. 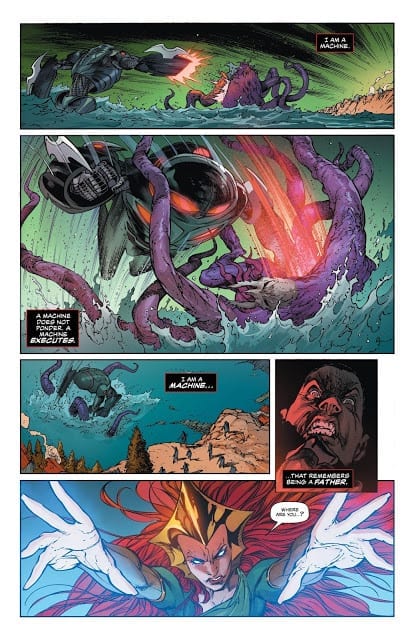 Unfortunately, the strain on her increases exponentially due to the distance and Manta’s might, but Aqualad musters up the courage to use his powers alongside hers’, infusing the “water Mera” with volts of electricity.

Writer Kelly Sue DeConnick uses this next moment brilliantly by having Arthur appeal Manta’s humanity. His heartfelt plea to save “David,” though sincere, adds fuel to the villain’s fiery rage, which adds strength to Tristan Maurer’s monster. The chaos leaves little room for hope.

But what everyone fails to realize is Manta’s father’ A.I. slowly remembering its former life, the lessons in honor taught to his son. This robot, which appears to be more human than Manta himself, remembers the love for his son and disavows the hate fueling this conflict.

Each character in this story wrestles with their emotions in a way that makes one often forget they’re reading a comic book. And the conclusion is sure to leave readers on the edge of their seats.

This issue’s artwork reminds one of a stormy sea: chaotic, fast-paced, and filled with surprises. Robson Rocha’s penciling and Daniel Henriques’s ink work provide fully,fleshed out details on both ‘s monster and Manta’s mech tech. Sunny Gho’s coloring fills these out with a myriad of bright and dark colors to represent the dichotomies between organic life and supposed soulless technology.

Clayton Cowles’ lettering is a treat as well; we see a shift in the dialogue balloon for Mera’s water creation in which the background is aqua and the lines are loose and free-flowing like waves.

Gho and Chris Stevens’ variant cover depicts Aquaman in his throne under the sea, commanding the creatures that live there. One of these appears to be a tentacle of Maurer’s monster, showing us just how much power the hero wields.

AQUAMAN #55 brings the thrilling fight between Aquaman and Manta to an end, but the conclusion isn’t what readers would assume. This tale provides high levels of insight into these characters we’ve grown to love.

Do you think Manta’s father acted according to his established character? Let us know in the comments below!

Review: AQUAMAN #55—Fueled By Hate, Or Love?Each character in this story wrestles with their emotions in a way that makes one often forget they're reading a comic book. And the conclusion is sure to leave readers on the edge of their seats.