AMAZING SPIDER-MAN #30 – One Menacing Villain To Another…

This week Marvel drops AMAZING SPIDER-MAN #30 into our laps. This Absolute Carnage tie-in issue is much more than your average tie-in comic. Nick Spencer’s other half, Ryan Ottley returns and puts on a show. 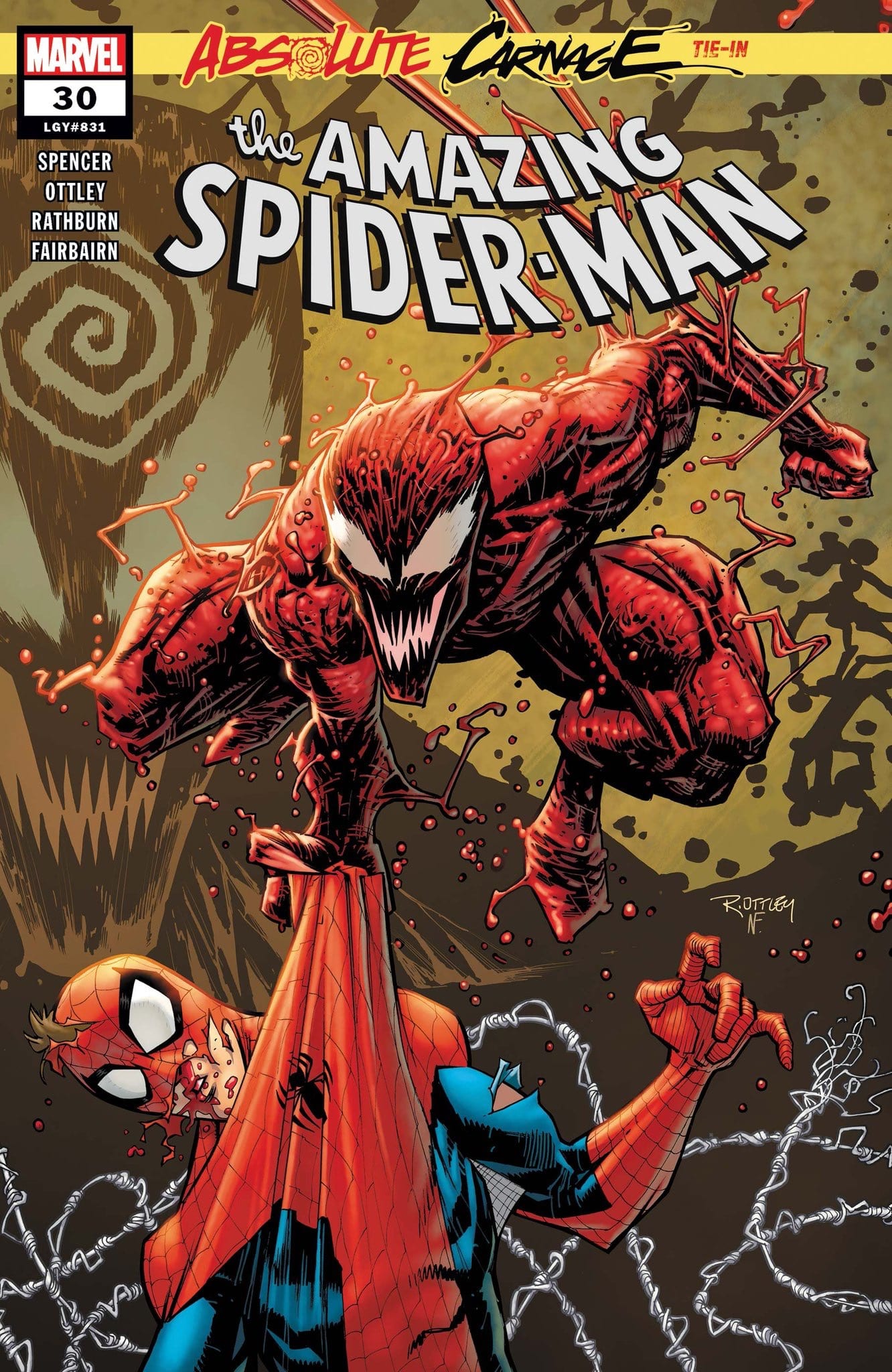 Symbiotes, goblins, and centipedes–oh my! Amazing Spider-Man #30 is fully-loaded with way more than most event tie-in issues have over the years. This issue is more focused on the continuing threads of Spencer’s ongoing Spidey adventures than it is fitting into Donny Cates’ Absolute Carnage puzzle–and it’s better for it.

The mysterious Kindred takes center stage as he talks trash to Norman Osborn in a padded cell. Throughout his menacing monologue there are a few hints or probable red-herrings as to who Kindred could possibly be.

Nick Spencer leads us towards the lord of evil centipedes being Harry Osborn, Flash Thompson, or someone else who has been in Peter’s life since childhood. It’s a masterful job by Spencer to keep the reader guessing without losing steam or becoming stale.

Kindred telling Norman “You won a long time ago” in his battle with Peter is absolutely chilling. This issue sheds a new light on Spidey and Osborn’s history of hatred. This is all while continuing to build Kindred into a potentially monumental adversary.

As for the tie-in bits, Peter protecting his godson and Brock’s secret son is good old fashioned Spider-Man super-heroics. This issue doesn’t factor into the grand scheme of the event’s story in a big way, but it moves the ongoing scenario along enough to be worth a read for those just interested in the event.

Spencer digs into Peter’s past once again and either creates or extracts these little moments that play such a crucial role in Peter’s current story. It’s an impressive show of comic book craft and continues to give this Amazing Spider-Man run the feel of a classic run.

Ryan Ottley graces us web-heads with his presence this issue, it’s a breath of fresh air as always. Without Ottley’s pencils, who knows how much any of us would really care about this mysterious Kindred character.

We may not get him on every issue in the run but it’s still superbly entertaining to witness Ottley draw Spider-Man issues. His action is big, heavy scenes are impactful, emotions are conveyed and felt by the reader.

Colorist Nathan Fairbairn floods our brains with glorious contrast and style. All of the symbiotes and Carnage-babies we’ve been seeing lately across all of Marvel yet all of it looks and feels fresh here.

Amazing Spider-Man #30 is a fantastic issue on its own as well as a tie-in issue. TELL US WHO KINDRED IS!