In their Action Comics #1000 story, Tomasi and Gleason give a strange but interesting trip through Superman’s 80 years of publication.

This week’s pull of comics has a momentous issue amongst it as Action Comics reaches its 1000th issue. For 80 years, the Big Blue Boy Scout has flown high as one of the most popular heroes from comic books. Several writers at DC united to write this issue, and we writers at Monkeys Fighting Robots have each taken one of the stories to review. This is the review for Peter J. Tomasi and Patrick Gleason’s story celebrating the Man of Steel’s 1,000th issue, “Never-Ending Battle”.

Being told by Clark after the fact, the story follows the Man of Steel trying to escape Vandal Savage. The immortal has strapped Superman to a device that would destroy him by using hypertime. His goal is to deconstruct Clark by removing all that he holds dear by trapping him in the past. The machine activates and Superman finds himself fighting his way across decades to get back to the present to face his enemy.

This doesn’t seem like a tremendous story when writing the summary, but it’s still one you need to read. The entire tale is a look back at the long history of Superman; not just through the current canon, but publication as a whole. We see his first adventures fighting in the second World War without his powers, the strange alien encounters during the Silver Age, and so much more. It’s fun to look back and see where he started to where he is now. From stopping trains to facing alien tyrants, the story is full of nostalgia for any fan of the Man of Steel.

The only conflict I had with this story is the very long-winded speech from the Man of Steel himself. Up until the final page of the story, he is the only one talking in one massive speech. It is a good speech, but there could have been an interjection from anyone to give some relief.

Patrick Gleason did a fantastic job illustrating this issue, worthy of the story it tells. As mentioned before, each page is a reference to an older Superman comics and to see them revitalized as such is a great way to honor the past. Alejandro Sanchez helps the illustrations pop off the page with his masterful colorwork. Together, this team has made this issue as beautiful as the 80 years of Superman that came before.

This is a fantastic tribute to Action Comics, Superman, and his entire publication history. The story itself might not be as exciting as the others in the issue, but it’s interesting enough to draw readers in. The art is phenomenal, honoring 80 years of the Man of Steel by modernizing the past. It’s a good story in a fantastic 80 page giant of a comic. 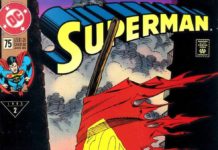