For Suicide Squad fans, the hits keep on coming. Not only is James Gunn’s movie sequel now underway, but now DC Comics has announced a new ongoing series that launches in December.

The Injustice 2 team of writer Tom Taylor and artist Bruno Redondo will be shepherding “the wildest version of the Squad yet,” according to the press release.

This new version of Task Force X is already full of changes, with new villains—any of whom could die on a mission or be dispatched by an all-new and mysterious leader who has replaced Amanda Waller. This Squad’s new mission is to neutralize a new group of international super-terrorists known as the Revolutionaries—and not everyone on either side will make it out alive! But when the U.S. government’s most deniable team of antiheroes realizes that the surviving Revolutionaries will be joining the Squad, that’s when the fireworks really begin! 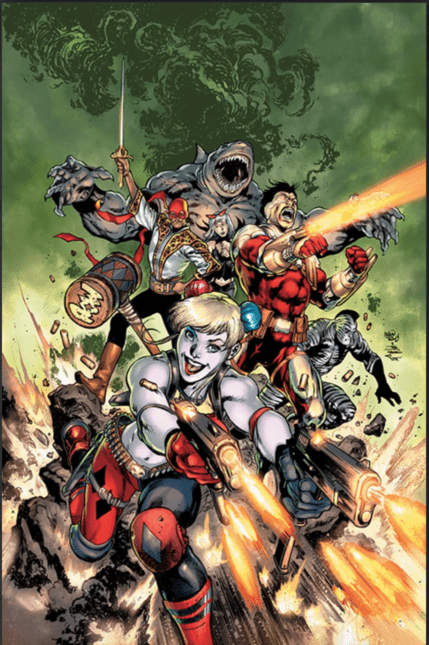 Taylor spoke with the Hollywood Reporter about the series. When asked what will differentiate his Squad from past versions, the writer said:

“For a long time, there’s been a sense of safety around the Suicide Squad. The anti-heroes and villains have gone out on the mission, fought dirty, won dirty and most of them have come home. In our book, that’s not the case any more. The team we send out in issue one won’t all live through the first mission. DC characters with years of history are going to be confined to history after issue one. Truly, no one is safe.”

Regarding the premise of the title itself, he added:

“One of the main things I want to do with this series… is to push the idea of these actually being suicide missions. No reader should know what to expect when picking up this book. We don’t want anyone reading our series and thinking, ‘well, they can’t die because they’re in the movie.’ No one is off limits here.”

And on the topic of more B and C-list characters (a Squad hallmark), Taylor said:

“We’ll absolutely see some more obscure villains. We’ll see some very early on, and I have a list of more I want to use if… say, unfortunate things happen to some of them. We have Cavalier, who I think is ridiculous, but the squad needs ridiculous, Shark, Zebra Man — who has great, unique powers, Magpie — who I’ve always associated with that first team-up of Superman and Batman, and others.”

You can read Taylor’s entire interview here. Suicide Squad #1 arrives in December as a 40-page debut issue with a cover by Ivan Reis and Joe Prado.

Are you ready for Taylor’s all-new, all-different take on the Squad? Leave us a comment!