After a quick hiatus, DC Comics WONDER TWINS #7 returns to comic stands this Wednesday, keeping the wonderful wit and heartfelt messages it was beloved for.

Originally announced as a six-issue-mini-series, Wonder Twins hit the ground running and surprised just about everyone. With how well the comic was received there’s no surprise that it was bumped up to a 12-issue series. The much anticipated ‘second season’ finally begins with Wonder Twins #7: “Trails and Twinulations”. Who doesn’t love some fun wordplay in titles? 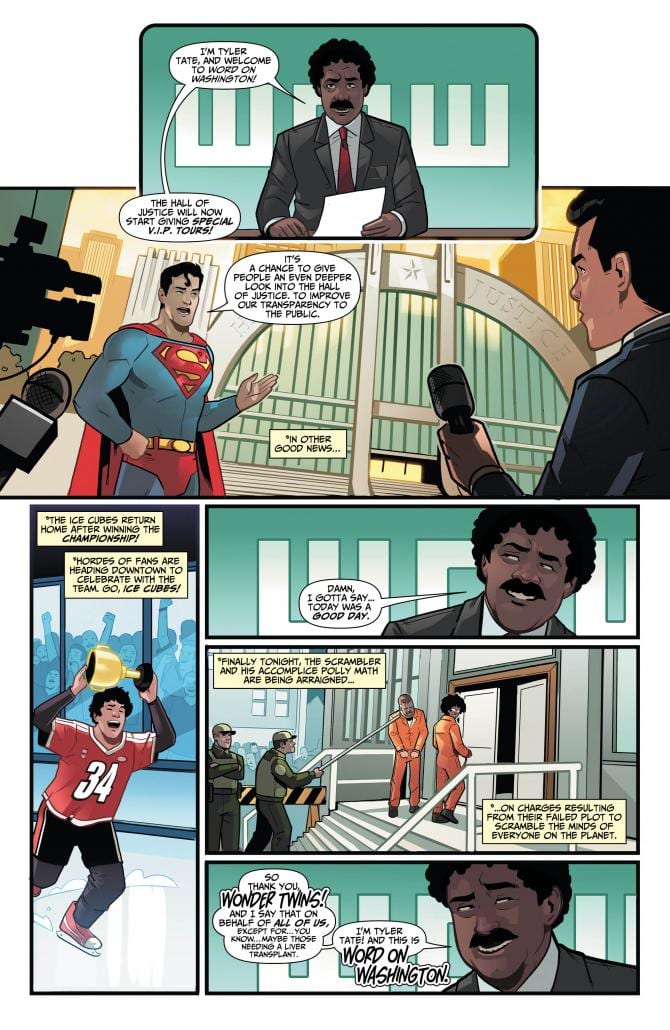 Writer Mark Russell has a way with words. He has the ability to deconstruct an idea in the superhero genre so well and so subtly that, once you realize what happened, you have to reread the issue. These subtle messages aren’t always hidden in between the lines, but even when he isn’t being coy, it doesn’t feel like he is force feeding you to think one way. That’s how Wonder Twins #7 feels, with Jayna expressing guilt over the events of her friend’s arrest in the previous issue, explaining to Superman that even though she did everything correct, it doesn’t end as wonderful has she thought it would.

The moment between Jayna and Superman is beautifully written, and could easily have paragraphs spent upon deconstructing it. Russell continues to show amazing plotting, pacing, and a great understanding of characters in the DC Universe, especially in Superman’s speech during said interaction. Big Blue gives the great life lesson that heroes don’t work for rewards. It’s a lonely road, and even when you do everything right, you may lose. Wonder Twins #7 isn’t just limited to life lessons, as Russell keeps the comedy and action throughout. 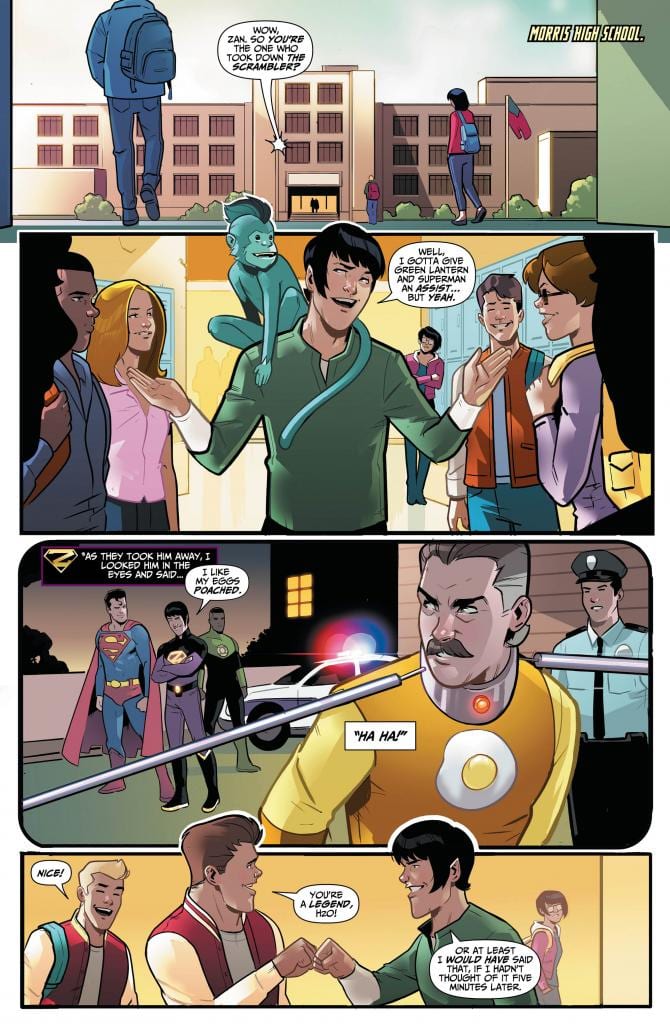 The quality of art by Stephen Byrne continues to astound even seven issues in. Using bright colors, mixed with his cartoonesque pencils, Byrne’s art helps Russell’s fun demeanor. But Byrne’s art style never tilts to the full cartoon style side, as he keeps realistic anatomy and realism in the interactions characters have with objects or their powers. This art style meshes well with Russell’s story being told, as he brings up serious points in a funny matter, which Byrne’s art then breaths to live.

Byrne injects the same amount of detail in an action scene compared to a dialogue heavy moment. If Russell’s writing was the meat in a sandwich, Byrne’s art would be the buns holding it together.

But what is a hamburger without veggies? That’s where letterer Dave Sharpe comes into the picture. With the Saturday Morning Cartoon art style, and life lesson of the episode theme, Sharpe has the opportunity to play around with the font style in multiple situations. When a character shouts something as loud as they can, or gets extremely surprised, Sharpe makes their words burst out of their bubbles to signify this attitude. In some moments when they are screaming at the top of their lungs, he adds colors to these broken word bubbles, helping convey the weight of the words.

Although it doesn’t feature much of the plot present in the previous issues, between the character development and message behind it, Wonder Twins #7 is another wonderful installment in what may be DC’s best series in 2019.

Memorable Quote: “Apparently, there’s a meteor heading straight for earth…so we’re all probably going to die…but the good news is we’re letting you out of school early!” – Principal.

Although it had a lot of moments that are quotable, this one had me laughing the most!

Wonder Twins has been a fantastic series thus far, and with this newest issue proves the first six weren’t a fluke, the big question is: have you been reading it? If so what did you think of this return?

Continuing the excellence of the previous issues, Wonder Twins #7 makes a wonderful return, bringing with it heart, action, and a great life lesson. WONDER TWINS #7 Returns With Life Lessons